Hey! We have one of these back home! 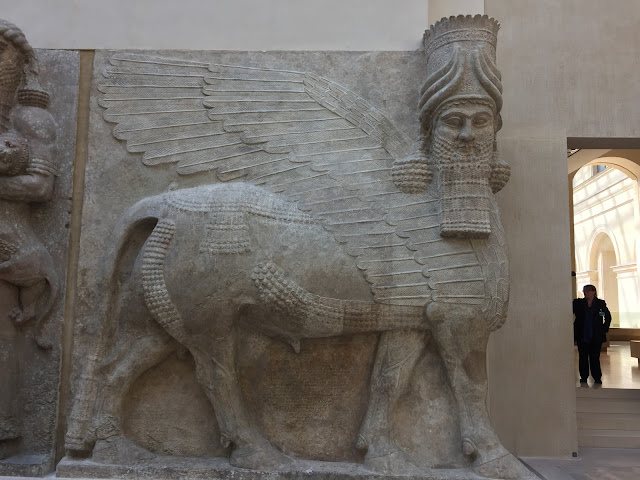 The stuff in the Louvre museum is original. That's sort of the point.
That lady smiling enigmatically? The actual Mona Lisa, not a photocopy, but really painted with actual paint by Leonardo Da Vinci. The Winged Victory of Samothrace? A bona fide 2200-year-old white marble Hellenistic sculpture discovered on the island of Samothrace. If it were white styrofoam from Cleveland, well, it just wouldn't be the same.

Which is why I was a little flabbergasted, during my recent visit to Paris, to turn a corner and see the 20-foot wide, 16-foot tall Assyrian winged bull of Sargon II. Which, to my knowledge was still at the Oriental Institute in Chicago. Excavated in what is now Iraq by University of Chicago archeologists in 1929, it had been shipped back to Chicago and been on display there since 1931. What was the beast doing here? Had it flown the coop?
A little on-the-scene sleuthing uncovered this clue:

Even my junior high school French could make sense of "Reproduction."
Though still a mystery. Why place, among all those actually treasures, a copy of this particular piece?  I mean, it's nice, in a brawny, blanked-eyed way. But couldn't they do without it? They had lots of other fabulous ancient stuff—the Code of Hammurabi, for instance.
After a few seconds of on-line sleuthing, I learned that the "M. Bourbon" on the plaque was Michel Bourbon, a Parisian artist who came to Chicago in 1991 and led a team of craftsmen to create a mold around the 40-ton, 2600-year-old sculpture. It was a difficult job. To keep the limestone from absorbing the silicon used to make the mold, they had to rub it first with a special conservation soap.
The Louvre wanted the model because, before the Maroons plucked away the 40-ton winged bull, the French had excavated the site, Dur-Sharrukin at what is now called Khorsabad, in northern Iraq and carted off Sargon II's throne room, with the exeption of the bull. Now they wanted the whole room displayed en suite. The odds of the Oriental Institute parting with its treasure were nil, so a copy of the big guy seemed in order. Four pounds of raw potatoes were rubbled inside the mold to smooth out the silicone.
They also used 8,000 pounds of plaster of Paris shipped from France. Not because the French plaster was considered superior to Midwestern plaster, though I suppose it was. But rather the work was sponsored by Lafarge Copee, a large French concrete and plaster company, and part of the deal was they fronted the cash, but the conservators were required to use their stuff. The potatoes, I assume, were local. (It was a good investment, if you notice the mention of "avec le concours de Lafarge"—24 years of subtle product placement at one of the landmarks of global culture; not bad for four tons of plaster).
The moral of the story. Whenever we talk about antiquities being removed from the ancient world, the default attitude is that it's plunder. However it was acquired, we swiped their patrimony and ought to give it back one of these days. But the truth is more complicated. This giant winged bull was found at a site not far from Mosul, where ISIS just blew up an ancient mosque. If European nations hadn't spirited it to safety, a lot of this stuff would not have survived to this day. Then all we would have are copies.
Posted by Neil Steinberg at 12:00 AM