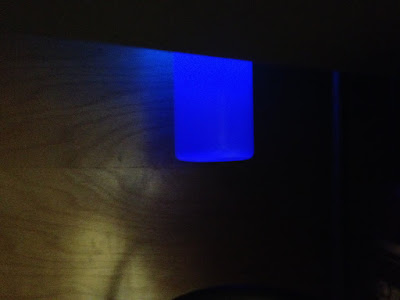 The innovative Cirque du Soleil bought Blue Man Group last week. As a fan of both ensembles, it seems a natural pairing, and sent me back over times I've written about Blue Man Group — in this one I presciently mention their eventual purchaser, in describing a particularly daft lawsuit.  It was a time when the column filled a page, and I've left in the subheadings. Afterward I'll let you know what happened with the case.

Silly me. Over the years, I have endured countless horrors at the Lyric Opera of Chicago — been menaced by several dragons; seen doomed lovers sealed within a tomb; witnessed the lips of a harmless bird catcher sealed with a padlock, and even watched, aghast, as Satan himself emerged, singing, from the fiery pits of hell.
And I never sued them. Not once.
Dumb.
Meanwhile James Srodon of California attends just one performance of the Blue Man Group at the Briar Street Theatre and files a lawsuit in Cook County Circuit Court claiming that their "Esophagus Cam" was shoved down his throat, knocking out fillings, damaging his windpipe and of course causing psychological distress.
Now I've attended several Blue Man Group performances and have my own issues with their show, mainly that it ain't drama. People act like it's a play because it takes place in a theater, but it's not. It's entertainment, part Cirque du Soleil, part concert, part magic show. So long as that's clear, Blue Man Group is energetic, loud, clever fun. Duping the audience is part of the thrill.
One highlight was a version of the Esophagus Cam: A member of the audience was invited onstage and then zipped into a canvas body bag while one Blue Man recorded the proceeding with a video camera. The sack was then dragged backstage — we follow the action on screen —where it was loaded onto a truck, driven away and, eventually, hurled off a cliff.
By then, it dawned on the audience that they were not watching a man actually being murdered in real time, but a prank involving an unseen cutaway to a pre-filmed segment. The kidnapped audience member actually slipped back into his seat.
At least one hopes they realized it. If anyone called the cops — "Oh my gosh, I just came from Blue Man Group, and they killed somebody!" — I'm not aware of it.
Srodon was singled out for a similar bit. The Blue Men gathered around him and pretended  — emphasize pretended — to shove a camera down his throat.
Now I wasn't there, so perhaps they slipped up, in a frenzy brought on by toxic blue-paint poisoning, and really did pry open Srodon's jaws and, as he claims, shoved a paint-and-food-befouled camera down his throat.
Perhaps he truly is a victim of assault who needs our cherished legal system to deliver redress for his suffering.
Or maybe — and frankly, I'm putting all my chips down on this — the Blue Men have done this bit 50,000 times over the last two decades, and were they in the practice of actually shoving cameras down patrons' throats, well, we'd have heard about it by now. Maybe it is a well-done illusion and Srodon, 65, a sensitive soul, was overwhelmed. A judge will decide, sadly.

There are two important lessons in this lawsuit against the Blue Man Group for a stage trick.
First, as much as I admire lawyers generally — my wife is a lawyer — this is the sort of lawsuit that exposes the profession to shame and undermines the idea of law as a desirable part of society. This type of lawsuit just hands ammunition to big insurance company hirelings working to further restrict the ability of the truly harmed to receive compensation.
Second, this sort of thing also ruins life for the rest of us. It is a big reason we live in the padded, homogenized, vacuum-sealed, fenced-off, gelded, oversafe, professional-driver-closed-course, do-not-try-this-at-home world we live in.
You can't ride a merry-go-round anymore without being herded past a legal disclaimer as long as the Magna Carta, informing you that this is a ride that revolves and goes up and down, that you will be exposed to equine wooden figures but that no actual horses were harmed in their creation, and pregnant women, the fantastically obese, the motion sensitive, equinophobes and those allergic to calliope music should not participate.
I'm surprised we have any entertainments at all. Most of the animals have already been exiled from circuses by fanatics, and I'm sure clowns are next. "Mr. Binky did knowingly aim and discharge a seltzer bottle in the direction of plaintiff Henry Prudock, exposing him to a stream of cold carbonated water, which wettened him, and drew the mocking laughter of his fellow audience members . . ."
Second, consider Srodon's belief that the camera was actually jammed down his throat. I am sure he is sincere, and this genuine conviction should remind us just how suggestible people really are.
It must be important to some part of the collective human ego that we ignore this obvious reality—to flatter ourselves, I suppose. So important that we prefer to embrace the existence of nosy visiting motherships from distant galaxies rather than entertain the possibility that our planetmates are a bunch of gullible dopes, dithering and pliable, soft-minded and open to all sorts of delusions, mirages, misapprehensions, panics and fantasies.
That is, when they're not outright lying . . .
Yes, humanity's ability to fall for anything has value — we wouldn't have magic shows, time-share condos or religion otherwise. But the downside is that we automatically assume that the witnesses really saw the criminal, that the testimony is not the product of brain cramp, that the lady was really sawn in half and replaced by a tiger.
I hate to involve myself in legal proceedings, but if the Blue Man Group is looking for an expert witness, I offer myself. I will testify, under oath and on penalty of perjury, that people are, in the main, morons, and that James Srodon is definitely a person. The jury can draw their own conclusions.

While the filing of the lawsuit was reported everywhere, the result was reported nowhere, as far as I could tell — a common lapse in journalism. In 2013, when another patron sued Blue Man Group after he was hit by a foam ball, the San Jose Mercury News caught up with Sroden's former lawyer.
‘The matter was settled for nominal dollars,’ Antonio Romanucci said. “I eventually withdrew from the case.”
Posted by Neil Steinberg at 12:00 AM