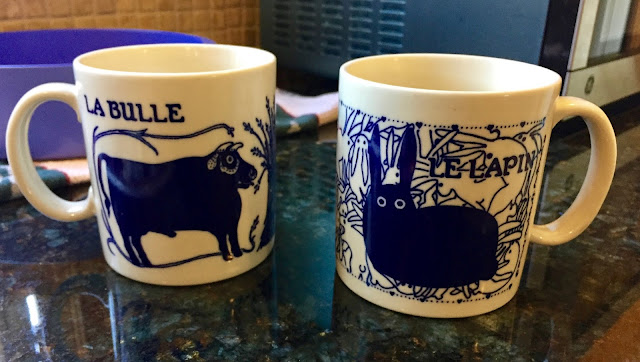 It's summer, and I'm about to take a little time off. It seems my brain got a jump on things, so if you're looking for a significant topic deftly handled, well, check back tomorrow. Maybe you'll have better luck.
Otherwise, when I was growing up, there was a shop in my hometown of Berea, Ohio called, aptly enough, "The Shoppe." It started off as what we called a "head shop," a small store where you could buy pot pipes and rolling papers and records and such. But soon it grew, and began offering clothes, and hip housewares. It's where, about 1979 I bought this pair of mugs to prepare the Quaker Apples and Cinnamon Instant Oatmeal I lived on as an undergraduate.
This was the '70s, people were less tightly-wound about such things, and if you notice, not only is the bull anatomically correct, but the rabbits in the background are, well, doing what rabbits are famous for doing. A leporine Kama Sutra. I can't recall if I noticed this before or after buying the mugs. My guess is after. I came to think of it as the "boffing bunnies" mug, and appreciated both for the wide expanse of cobalt blue making up each creature, and particularly for the large size mugs. Perfect for tea.
I looked closely at the steer mug and saw it's signed "1978 Win Ng-Taylor." In 1965, Spaulding Taylor and Win Ng formed a company called "Environmental Ceramics" in San Francisco, and came to be a quite popular purveyor of chic kitchen supplies, mugs and aprons, pot holders and dishtowels, in the 1970s and 1980s under the name Taylor & Ng. The company had a generally asian aesthetic, and also sold woks, if I recall, an exotic item at the time.
The Shoppe is still in Berea and—why does this surprise me?—Taylor & Ng still operates online, where you can buy the exact same mugs, at the company's web site here, for $9.75.
Of course you can. Though my mugs were made in Japan,and my guess is the new ones come from China. Still, they sell 'em. We live in a time where nothing, absolutely nothing, goes away. Whether that is a good or bad thing, well, you can discuss. So maybe a little significance after all, despite ourselves.