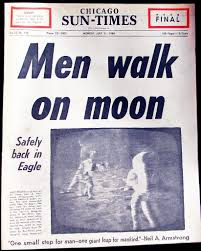 If you remember the moon landing as a huge, jubilant public celebration, you are mistaken — that was Aug. 13, when the three Apollo astronauts, Neil Armstrong, Edwin “Buzz” Aldrin and Michael Collins, stopped in Chicago for a tickertape parade. Two million packed downtown for it. Never one to leave anything to chance, Mayor Richard J. Daley had requested the visit on July 11 — five days before the Saturn 5 rocket even took off from Florida.
The day of the landing, the Loop was almost deserted.. Only a few people clustered around TVs in store windows. "Did they see God yet?" asked a little girl. First, it was a Sunday. Second, the moonwalk originally was supposed to take place at 1 a.m. Chicago time.
Third, and most importantly, the historic event was happening on the moon. Everyone on earth had the same perspective — as viewers glued to television sets. About as many households had TVs then — 93 percent versus 97 percent now — though the tendency was still to gather with family or friends to solemnize the event and experience history together. The biggest public event was 3,000 people gathering at the Adler Planetarium to watch the landing on their televisions.
Perhaps the most common emotion was amazement. Remember, older Chicagoans had memories of the Wright brothers’ first powered flight not quite 66 years earlier, in 1903. So the astonishment was as much about TV’s ability to convey it as with the landing itself.
”We were all there, bound together by the miracle of communication that intertwined all the other miracles of technology that marketed man’s first step on a celestial body,” the Chicago Daily News said in an editorial.
”The medium reached its electronic apogee Sunday night by bringing in a picture — a live, moving picture — of astronauts Neil Armstrong and Edwin Aldrin walking on the surface of the moon,” Sun-Times columnist Paul Molloy wrote. “There has been nothing like this in the full history of broadcasting.”
Not that television was alone in patting itself on the back. The Chicago Tribune ran an editorial, headlined "The Tribune's Own Great Feat," suggesting that its coverage of the landing was an event equal to the landing itself.
But television had the advantage of near-instantaneous coverage. In Northbrook, dozens of moviegoers left just before the end of "Goodbye, Columbus" to watch TVs in the lobby.
Imagining the hundreds of millions around the world watching, Molloy suspected that “many had to be repeating over and over again: ‘Am I really seeing this? Is it really happening?’”
That was the reaction of Kathy Slatek and her friends from Morton West High School. ”It was hard to believe it was live,” said Slatek, who was 15. “I couldn’t make it sink in that it was really happening.”
Steve Dmytriw, 16, and friends from Tuley High School “sat awed” watching TV in their backyard and talked about whether they’d make the journey, given the chance.
”I’d go,” Dmytriw said.
To continue reading, click here.
Posted by Neil Steinberg at 12:00 AM