The Joys of Summer #2: Hot Dogs 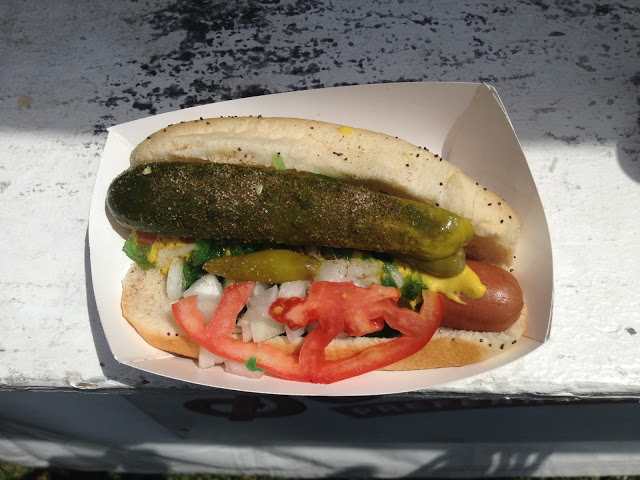 I love hot dogs—who doesn't?—and have written about the humble frank on a number of times over the years, whether attending Hot Dog University, or dipping into the ketchup controversy, alluded to yet again below. I somehow never shared this visit to the mothership itself, the Vienna Beef factory. Gold Coast is gone, alas, except for a tiny outpost tucked into a remote corner of Union Station. And Vienna Beef moved its factory to Bridgeport in 2016. No hot dogs, or solid foods of any type, for me at the moment—but I'll be looking forward to my next one, some time in August. Or September at the very latest.

Another Fourth of July come and gone, and have you reflected on your deep personal debt to the humble hot dog? I thought not.
Despite this being peak wienie season—nearly half of all hot dogs are consumed between Memorial Day and Labor Day—and despite Chicago being a world center for hot dogs, somehow the mild little sausages don't get proper credit, their significance ignored in their home town, drowned out in the choruses of praise for other Chicago standards, such as pizza.
To add insult to injury, the only references I noticed to hot dogs over the holiday weekend were several reports on a hot dog eating contest—on New York's Coney Island, of all places, sponsored by Nathan's Famous Hot Dogs, whose franchise on Rush Street quickly withered and died in the face of superior local fare.
"Chicago is a hot dog town," said Tom McGlade, a senior vice president at Vienna Beef, the largest of several frankmakers in the city. "We have 1,800 hot dog stands—more than the number of McDonald's, Burger King and Wendy's combined."
That gets overlooked, since none of those hot dog stands have the advertising clout of the burger giants. Most of Vienna's marketing goes into hot dog stand umbrellas and those eye-catching posters of giant hot dogs.
There are many noteworthy stands, such as Gold Coast Hot Dogs on State Street, known for the tendency of visiting Hollywood stars to send their underlings to Gold Coast to fetch bags of chardogs back to their luxury suites.
And Murphy's Red Hots on Belmont Avenue, whose owner, Bill Murphy, found himself tapped as the Col. Sanders of the Japanese hot dog after he stepped out from behind the counter to greet a group of Japanese customers at his stand. They turned out to be a team of food executives scouting the American hot dog scene before introducing the fare to the frankfurter-starved Japanese millions, and Murphy's friendliness earned him a goodwill trip to Japan.
Despite the famous quote about how people who like legislation or sausages should never see either being made, I couldn't resist inviting myself over to Vienna's North Damen plant, where more than 100 million hot dogs a year are sent forth to gladden the hearts of a weary world.
"Before I came to work here, I always thought hot dog makers were sweeping bugs off the floor, tossing in cow's noses and pig's toes," said McGlade, standing in front of a vat of 2,500 pounds of ground beef. "You can see how clean our beef is."
Indeed. The meat looked as attractive as a ton and a quarter of ground meat could. Surround it with a hundred loaves' worth of toast points and a few dozen pounds of chopped egg, pop open a few jeroboams of champagne, and you could have the largest steak tartare party in the world.
The beef arrives in big hunks from Vienna's own slaughterhouse in Harvard, Ill. I was taken aback when I saw a worker with a metal hook at the end of his arm use it to pull a chunk of meat toward him so he could trim off the fat with a big curved knife. The perils of industry, I thought.
Then I noticed that all the other workers had hooks, too, and I quickly realized the hooks were held, not attached.
A computer monitors the mixture to make sure it is 80 percent beef, 20 percent "sweet brisket trimmings"—a fancy way of saying "fat."
Garlic, spices and salt are added and the mixture is pulverized until it ends up an unappetizing beige gel, which is then packed into casings.
After the dogs are cooked, they turn the rich, enticing mahogany color people associate with beef franks.
"No dyes," McGlade said. "It's a miracle." McGlade demonstrated that they are pre-cooked and don't need heating by plucking one off the line, snapping it in half, and taking a bite.
Vienna takes credit for the invention of the famous Chicago Style Hot Dog, a frank buried under a mound of yellow mustard, neon green relish, chopped onion, tomato wedges, a pickle slice, hot peppers and a dash of celery salt.
"It's a nice combination of sweet and crunchy and hot," said McGlade, who personally likes his dog with jardiniere and Grey Poupon mustard.
You think that's odd? I like mine with mustard and ketchup, and eat them that way even though every person I've ever mentioned this to recoils in utter visceral disgust.
I've come to accept ketchup on hot dogs as a perversion unique to myself, and will continue the practice until they pass a constitutional amendment banning it, and probably beyond.
Then there is the entire question of charred vs. boiled.
But that's an entirely different column. Hot dogs, thank God, are one area where consensus is not needed. You can enjoy your hot dog with whipped cream and a splash of Tabasco and it won't disturb me a bit. It's summertime. We should all relax.