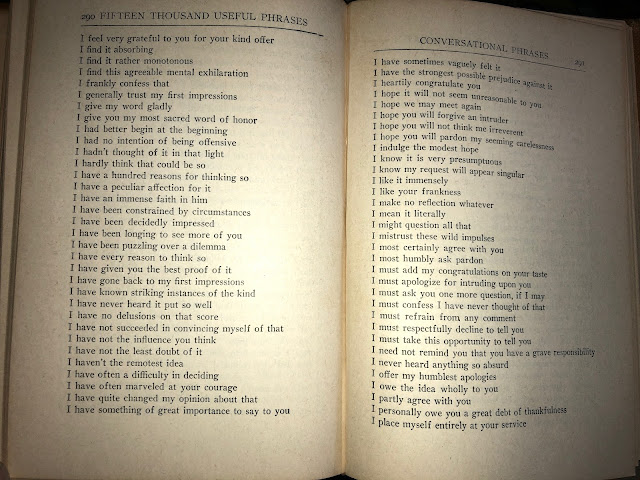 I can't remember what possessed me to purchase Grenville Kleiser's FIFTEEN THOUSAND USEFUL PHRASES, saddled with the enormous subtitle: A PRACTICAL HANDBOOK OF PERTINENT EXPRESSIONS, STRIKING SIMILES, LITERARY, COMMERCIAL, CONVERSATIONAL, AND ORATORICAL TERMS, FOR THE EMBELLISHMENT OF SPEECH AND LITERATURE, AND THE IMPROVEMENT OF THE VOCABULARY OF THOSE PERSONS WHO READ, WRITE, AND SPEAK ENGLISH. 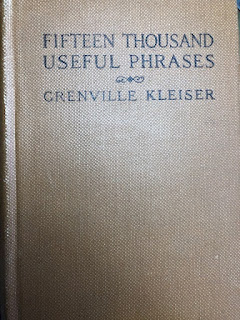 I do know that I've had the book over 40 years, for a reason I will get to, eventually.
My hunch is that, as a young man, I was taken by the pure striving quality of the thing. Here were Useful Phrases, Significant Phrases, Felicitous Phrases, Impressive Phrases, according to the table of contents, which Kleiser calls a "Plan of Classification." Some had become hackneyed cliches, some were just strange.

Some were useful. "Fly to platitudes"—I kinda like that. Though I didn't buy it so I could apply myself to its program of study, where Kleiser, writing in 1917, urges his student to read pages of the phrases aloud, then underline those that resonate—in pencil, naturally—and eventually copy out phrases out in their own handwriting. The fact the book cost $2.45, according to the figure penciled inside the front cover, might have entered into it.
"This exercise is a great aid in developing a facile English style," he writes.

Swift as a swallow heading south
Swift as lightening
Swift as the panther in triumph
Swifter than the twinkling of an eye.

Maybe because I was learning to write myself, gazing at papers spattered with comments in red pen. The book seemed to have the aura of all those who had gone before me, earnest young men in their high celluloid collars and green eyeshades. There is one instruction of Kleiser's that I did take to heart and practice, not at his behest, I believe, but coincidentally—I do sometimes tuck away phrases encountered in my reading that might be useful in a column someday. Or as Kleiser urges:
"As an enthusiastic student of good English, you should carefully note striking and significant phrases or literary expressions which you find in your general reading. These should be set down in a note-book reserved for this exclusive purpose."
That's habit is what led to my last book (last in the sense of "most recent" and, I'm beginning to suspect, "final") "Out of the Wreck I Rise: A Literary Companion to Recovery," written with Sara Bader. Alcoholics Anonymous wasn't exactly floating my boat, particularly the writings, which had a tang of 1930s Boy Scout Handbook. But in my own reading, I would encounter sentiments that I found powerful, and would either mark them with a Post-It or jot them down. So Kleiser was obviously onto something. He wrote books on writing, speaking, self-improvement.
The book, I've just discovered, had a certain notoriety in the Internet age, being at times the most downloaded volume on Project Gutenberg, an early online publisher of out-of-copyright volumes.  Why? According to writer Phil Edwards:


It’s the perfect resource for modern spammers using a technique called word salad. Spammers found his book and started downloading it in droves.Word salad spammers use random phrases to get past spam security filters, because your spam filter sees these legitimate phrases as indicators of a real message (though, in the case of spam, they never are). Kleiser’s book is the perfect resource for spammers: vetted phrases that are already sorted into a separated list. 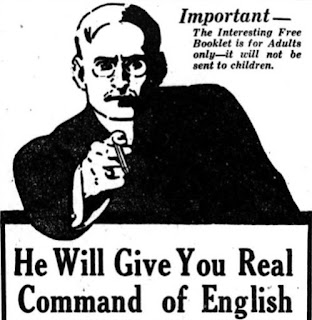 There's an irony for you. This use of Kleiser's phrases by spambots to defeat filters was the exact opposite to the personal touch that Kleiser offered—and I think this is my favorite part of the book—hidden deep on the list of his books opposite the title page.  The first 13 are similar titles—"HOW TO BUILD MENTAL POWER" and "HOW TO SPEAK IN PUBLIC" and "HOW TO ARGUE AND WIN" and such.
But that 14th, well, let me share it in its entirety:
"GRENVILLE KLEISER'S PERSONAL LESSONS IN PUBLIC SPEAKING and the Development of Self-Confidence, Mental Power, and Personality. Twenty-five lessons with special handbooks, side-talks, personal letters, etc. Write for terms."
"Personal letters, etc." The great man, himself, former instructor of public speaking at Yale Divinity School (for just two years, apparently) would help you, directly, writing letters to you, Mr. Striving Individual, to aid in your quest to attain self-confidence and a personality, for a fee to be determined privately.
I don't know why I loved that, but I did. It was so small ball, and augured our current moment, when most writers from Stephen King on down are shaking hands and trading slaps with readers, one-on-one, on Twitter and half a dozen other platforms.

So how do I know that I've had the book at least 40 years? That's easy. Freshman year at college, I briefly drew a comic strip for the Daily Northwestern. I turned it in, had it accepted, and all that was left was to come up with a name for the strip, a task that overwhelmed my 18-year-old self. I dithered, and suddenly the first strip, and its title, were due. In a panic, I consulted my Kleiser, which I imagine I did not bring from home, but must have purchased, probably at the newly-opened Bookman's Alley. There, in the left hand column of page 54 between "taciturn magnanimity" and "tameless energy" is the phrase "tactical niceties." Something about that resonated with me, and I named the strip, which didn't last more than a dozen installments, "Tactical Niceties."