Farewell Mad, thanks for the skepticism 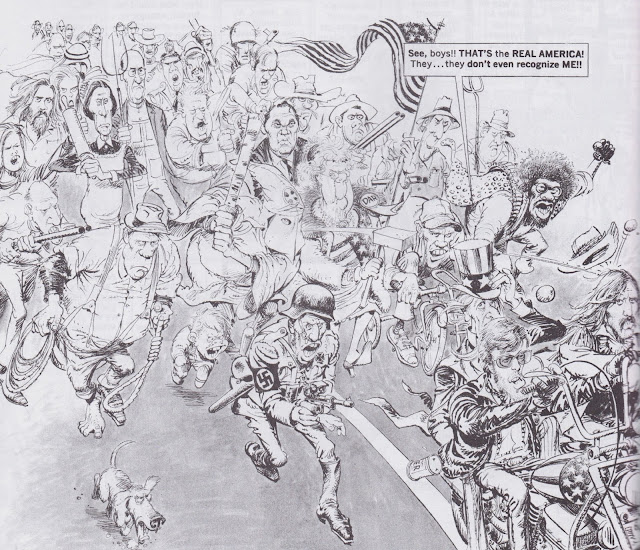 The world was my father and mother, big sister and little brother. The single-level ranch house on Carteret Court, and a few blocks beyond. A mile away, Fairwood School, a couple dozen white suburban kids, led by the teacher—in 6th grade Miss Benson, who lived with school secretary Miss Palmer, an arrangement we kids never thought twice about, but whose significance would strike me about 25 years later in one of those “Ohhh...” moments.
Order reigned, and while life in all its messiness certainly roiled places far from Berea, Ohio—wars, protests, moon launches—even those were rational, understandable, delivered 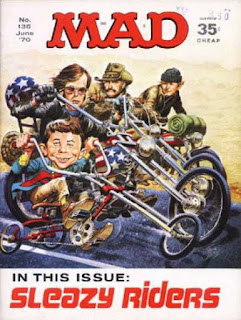 in sensible reports each morning in the Cleveland Plain Dealer and at 5:30 by Walter Cronkite on the CBS Evening News. The little black and white TV was perched next to the dining room table, and we’d all watch, my father mandating silence.
The first whisper of chaos, the bugle call that the cavalry was on its way to save me, was Mad magazine. The adult world wasn’t the temple of reason and dignity it pretended to be. It was a madhouse, a crazy anthill, seething with idiocy and hypocrisy. Not only could you laugh at it, you had to.
I remember the first issue of Mad magazine that found its way into my hands. The June 1970 parody of “Easy Rider.” I can see that cover as if it were on the newsstand at Rexall Drug. Mort Drucker’s caricature of Peter Fonda and Dennis Hopper—I didn’t know how spot-on it was because, of course, I hadn’t seen the movie; alongside, the magazine’s dimwit mascot, Alfred E. Newman, pedaling his bicycle.