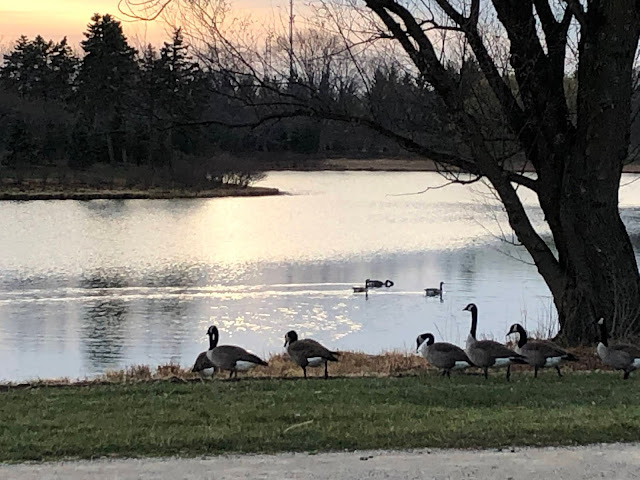 "I don't think we've been on this path before," I say, part as threadbare joke, part in sincere wonder that no matter how many times my wife and I walk through the Chicago Botanic Garden, dozens and dozens, hundreds even, we always see new things. What I mean is, "This is fresh, this feels new, I like this."
I always do. We've been members for years, gone regularly for years. But during the past eight months of the COVID crisis, we've really leaned on our membership. Three, four, fives times a week. Six. After work, usually. Or as a lunch break. For an hour, usually.  Just walking, this way and that, randomly chatting about this or that, our day, our kids, sometimes politics, if we can't avoid it, but we try to. Sometimes not talking at all. Sometimes in what our older son calls "companionable silence." 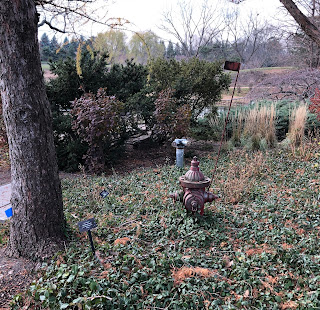 It's never gotten dull. It's kept us sane. We've never gotten tired of it. Of course not. The Chicago Botanic Garden is big, 385 acres, and with our going at different times of day, light to dark, and different seasons, summer, winter, spring, fall, dazzling heat and bitter cold, flowers awash in bright springtime colors and retreated into the browns and ochres in winter. Not to mention heading down different paths—you really can't walk it all in one visit. You can't take in half, plus and facing different directions. There really is always something fresh, something we haven't done in a while—the woodland path. It's a little apart. We haven't walked it in a couple months now. Maybe three. Must do that.
"That fire hydrant is new," I said, pointing it out. Not meaning "new"—it's obviously quite old, the fire plug from a children's book, and clearly has been there every single time we've visited, by the entrance to the orchards and vegetables gardens, waiting patiently to be noticed. Or maybe I clamped eyes upon it 10 years ago and subsequently forgot. That's possible. the thing doesn't exactly call attention to itself, other than its charming old-fashioned quality. No reason for it to vibrate in mind. 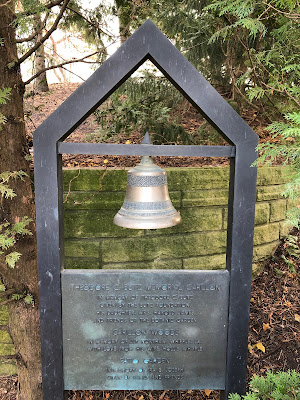 Why notice it now? Maybe the light was right. Or we were vectoring in just the right direction to bring it into our line of sight. We notice a lot of things that way. Never seen before, then suddenly right under our noses.
My wife noticed this bell, tucked behind some evergreen branches by the carillon, which a certain family member pronounced "carillion," until occasional gentle correction and the passage of years, nudged them into the proper pronunciation, so now just saying "let's walk by the carillon" has the sense of a complicated bit of personal business. An ingrained demi-tradition, so that hearing it said right, "carillon," is almost a let down, a loss, at least to me, a uniqueness that was allowed to fade through inattention. I have to bite back expressing the desire to hear in incorrectly.
In the summer, there are carillon concerts—not this past summer, of course, but previous summers, the bells chiming out across the gardens, and, one hopes, next summer. People bring picnics, spread blankets. It's nice. Though over the summer we did happen by when somebody, a student I imagine, was practicing, and we felt lucky to be there. Though honestly, we always feel lucky to be there, bells or not, and usually say it, one of us or both, at various times, "We're lucky to have this," one of us will say and the other will echo "yes lucky" the word resonating a few times, itself like the peal of a bell.
We stay for an hour. Not only do you discover aspects that are always there, but 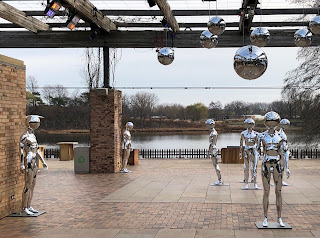 sometimes there are ephemeral displays. Orchid shows and cacti shows, back when people did that kind of thing. I usually take a brochure, planning to join, not for the plants, but for the members. It seems like the ideal setting for a murder mystery, the Cactus and Succulent Society of Greater Chicago, awash with violent controversies and seething, suppressed hatreds, all out-of-scale with the tender attention to little spiked spheres. I always smile just contemplating it.
Pumpkin festivals, art fairs. They're having their light festival right now—don't try to go, it's sold out— and we happened upon these metal men. Not my cup of tea, frankly. Escapees from a Barney's window in the year 1988. But we saw them from a distance and wandered over, then paused before them a moment to take a looking. Knowing they might be gone next time we visit. Hoping that.
"They're all men," my wife observed, and so they were.
Not only are there paths and ponds and plants but, to continue the "p" motif, people, all ages and races and conditions, black and white, Hindi and Chinese. Elderly couples and mothers changing babies on blankets. Hispanic families taking quinceanera photos on the sly. Engaged couples posing on the bridges. Orthodox Jews on dates. Christian families fresh from church. Generational groups. There always seems to be a lot of nationalities there, I'm not sure why. A lot of Russians, and I plan to someday ask a few what it is about Russians and Botanic Gardens. Somebody must know. I'm always hearing snatches of conversation—they talk to each other constantly, or into cell phones.
"Konyeshna," I said Saturday, repeating a word I had overheard. "'Of course.'" Then we talked about how odd that that word would slumber somewhere. I haven't studied Russian in 40 years.
At home Saturday night, preparing dinner, we did our usual post-walk post-mortem, and came to our usual conclusion.
"It was special," my wife said.
"It's always special," I said. She pondered that logical contradiction.
"Extra special," she replied. 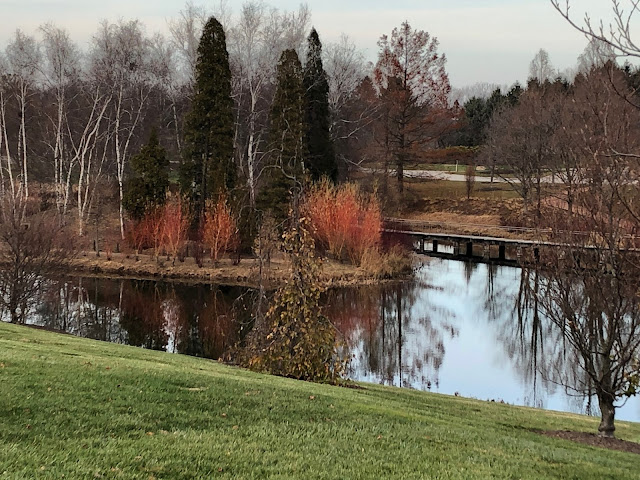