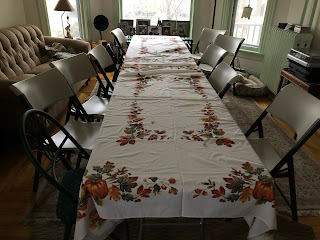 Happy Thanksgiving!
I suppose I should just leave it at that. After a brutal, endless, emotionally-wringing 2020 presidential campaign, with its unprecedented attempt by a sitting president to subvert the election process, conducted against the background of a raging viral pandemic, we deserve a moment of relief, of stepping away from the maelstrom and concentrating on our own personal lives. I still feel blessed, and hope you do too. I hope there is food on the table and a loved one or two in your bubble and you find time to pause, and reflect, and give thanks for the good things, the rocks that are not washed away in the tempest, solid enough to set up a table and sit and share something plentiful and good.
Period. End of post.
But this is far from the usual Thanksgiving, even though an alarming number of Americans are pretending it is just another holiday, hopping on planes and gathering in big family groups, while all of the medical experts and the responsible parts of government beg them not to. Why? I suppose being heedless, even stupid, has something to do with it, or at least on automatic pilot, zombies vacuuming a house that's on fire.
It isn't entirely their fault. We've been grinding through eight months of this. The impulse to say, "The hell with it," is human and strong. Plus many are being led astray. It isn't as if Trump is alone setting fire to the curtains. Yesterday I notice a post on Sen. Ted Cruz of Texas' Twitter feed and, well, perhaps it's best if I just show you: 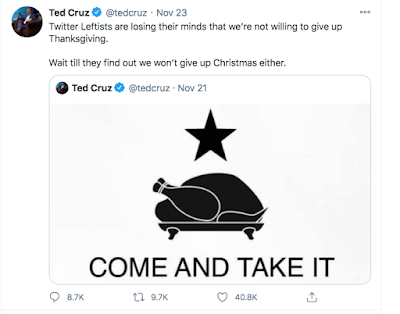 In one sense, that is a standard GOP bullshit, the hallucinatory conjuring up of some insane stand—the War on Christmas migrating to Thanksgiving—and projecting it on the bogeyman of liberals, so it can be decried. Squeezing a little imaginary victimhood into a paper bag so it can be huffed, for the high it obviously produces. Not that there aren't academic sorts pointing out that the actual first Thanksgiving took place in September, or that it didn't work out so well for the Native-Americans welcoming the pilgrims. Not that some don't cluck at Thanksgiving, as people do about literally everything. Yet all of it scraped together doesn't amount to a collective eye roll, never mind "losing their minds." Rather, it's the same comic Yosemite Sam bow-legged bluster, Cruz firing his rhetorically six-guns into the air, swaggering against imaginary enemies who are, again remember, trying to cut down the number of conservatives who are dying on ventilators in three weeks.
It is grotesque enough from a stupid man, from a man like Donald Trump. To see it from Cruz, who was educated at one point, and knew enough to denounce Trump in 2016, before he fell at his feet and began rolling like a puppy. It's despicable and should excuse him from the office he holds—in Texas, remember, where they called out the National Guard to help with the morgue overflow—never mind let him aspire toward higher office, as he so obviously does. That he is a member—I almost said "respected member" but don't want to overstate the case—of the United States Senate, and not some fringe loon, is a hard pill to swallow. Never mind the prospect that he might be the 47th president since, after Trump, anything is possible. So I had to take that tweet and seal it in a bottle and set it on the shelf, here, where we can find it in 2022 when Cruz starts vigorously running for an office even further beyond his abilities. (Assuming he's still not crouched over Trump's shoes, licking).
This is criminal negligence, to make business-as-usual Thanksgiving into an act of political defiance and egg his flock of Lone Star State sheep to rush baaing to the nearest pack of wolves and show their bellies.
Enough, let me let you get back to your celebration, the more modest, safe and low key the better. If Ted Cruz can wildly cheer on folly, then I can provide a knowing nod of approval to caution. There is nothing wrong with stepping away from the herd. When you're giving thanks, you might want to give thanks for being able to breath, unassisted, because not everyone can.
We will always remember this Thanksgiving. Crisis holidays are like that. I remember a distant New Year's Eve, 2000. The coming of the millennium was a big deal, and people were doing all sorts of wildly excessive things, rushing off to the pyramids, seeing laser shows in Paris. Not only did I not do any of those things, but I had to work, the newspaper sounding an all-hands-on-deck alert in case the Y2K computer melt-down some experts feared actually occurred. (Before COVID, before 9/11, we had no idea what a crisis looked like...)
So it's 11:45 p.m., Dec. 31, 1999. A quiet night, none of the bad stuff we feared occurring, and I look up at the harsh florescent-lit newsroom at 401 N. Wabash and think, "I'll be damned if I'm ushering in the millennium sitting in this goddamn place." And I get up, and go downstairs, and stroll south on Wabash Avenue, an unusually warm December night, and stop at the middle of the Wabash Avenue Bridge, lean against the rail, and watch the clock on the Wrigley Building slowly advance toward midnight, utterly alone, the street empty. It was quiet and solitary and peaceful. At 11:55, a knot of partygoers, rushing somewhere down the block. Then still again.
At midnight, a soft cheer, from somewhere, from everywhere, and some fireworks popped in the general direction of Navy Pier. It was a very nice, comforting moment that became a beautiful memory. I hope this COVID Thanksgiving is the same for you. There will only be the one, if we're lucky, and we might as well make the best of it. We can celebrate in the traditional fashion next year. Those of who live to see it, I mean. Stay safe. Happy Thanksgiving. 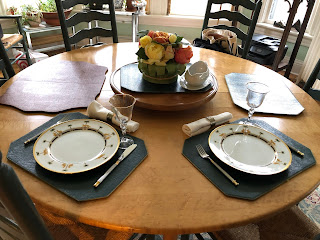