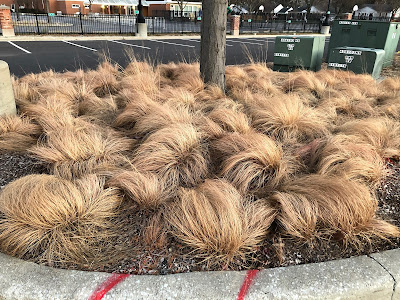 The "Raiders of the Lost Ark" quality of the Trump ordeal, how it keeps coming at you—deadly spikes bursting out of tunnel walls replaced by giant boulder rolling toward you leading to Amazonian tribesmen shooting poisoned arrows—means that the president finally admitting the obvious, that Joe Biden will be sworn in as president Jan. 20, brings only a small frisson of relief and the immediate question, "What's next? What peril is right now zinging in our direction?"
Will Trump consolidate his stranglehold on the Republican Party? Build his own media juggernaut and stride toward the 2024 campaign? Defect to Russia while babbling secrets? A thousand days of rallies and tweets and rhetorical boulders tossed into the political pond? Or will he, could he possibly, begin to fade, Cheshire-cat like, until there is only that horrible hairdo hovering behind some neglected podium?
Nah, not that. That isn't how these things work. "Oh look Indy, I guess we got the priceless statue, got away clean and are home free..." Won't happen.
Will some other Republican lunge to take Trump's place? Is that even possible? That's the question I've been chewing on: Is Trumpism transferable? Can Ted Cruz simply put on a red baseball cap and be worshipped like a little toy god too? That is a risk, but very hard to imagine. Then again, all of this was hard to imagine. But my gut tells me no. To get the momentum Donald Trump did, the running start of Manhattan megalomania and years of reality TV, you have to be Donald Trump. Marco Rubio can't do. Donnie and Eric Trump can't do it. There was a Fox News in 2012, but nobody was shrieking because Mitt Romney touched their hand.
Then again, all that frenzy, the illusion-based calliope they've built, has to go chugging off in some direction. Conservation of mass, energy. Nothing vanishes in a puff. They aren't going to look at each other, blinking, and suddenly wake up. "What? Where are we? Who? Joe Biden is president? How can we help him move the country forward?" That ain't happening either.
Earlier this year, I cast Trumpism as an addiction, a damaging compulsion clung to by broken people in full flight from the world of facts. If we keep the addictive mechanism in mind, then the concept of growing tolerance for the substance of choice might be useful. Don't let our craving for moderation, for relief, blind ourselves to how these people function. The dullness of normality, policy, programs is what they're fighting. They need more insanity, not less, to raise a tingle in their blown-out senses. Trump will be replaced with something wilder, grosser, more destructive. Not Ted Cruz but Alex Jones. The crazy will give way to the really crazy.
That's fairly terrifying. And a reminder that prediction is pointless. Nobody could have seen the Trump juggernaut in the spring of 2015. Whatever giant spider or six-headed cobra is hurrying our way, we can't really prepare for it, much.
So, speaking for myself, I plan to enjoy this moment of calm, the part of the movie where the China Clipper is flying along a little dotted line over India, a breather, the naming of governmental officials who aren't bumblers, fanatics and children of president. Given how horrified we were when it seemed like it was never going to happen, we owe it to ourselves to be pleased, for a little while, that it has happened. To sigh, smile, and await what comes next—a dozen assassins with scimitars raised, shouting "Aiyeebah!" and rushing at us from all directions. That sounds about right.