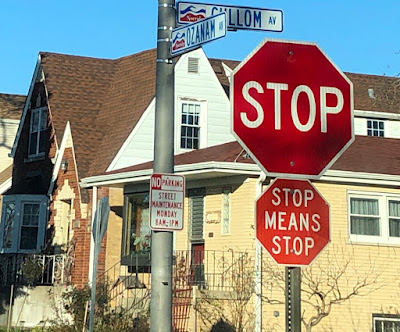 What is more standard than a street sign? Designed to convey a single simple message to drivers zipping past, they are one form that isn't played with. Stop signs are always a red octagon. They're never blue. They're never square.
So driving down a street in Norridge Saturday I was instantly intrigued with this stop sign addition, a little mini-me sign, adding an exclamation mark to the standard stop sign. As if the town were saying, "No kidding, we mean it." I'd never seen one before.
Could it be official? Or some desperate measure from a local resident? It looked too well-wrought for that. They got the font right, and that is usually a giveaway.
At home I jumped online, and found the signs as early as 2008 in Hinsdale, and references to a "Stop Means Stop Program." But I couldn't find an original source—not the program itself., obviously a play off "No means no." Kinda risqué for a street sign. Then there is a tradition of newer signs having a little edge, trying to cut through the clutter and stand out from the overfamiliarity of the usual. New York's classic, "Don't even THINK of parking here" comes to mind.
I found them in Georgia, but most seem a suburban Chicago thing. Forest Park tried them. Park Ridge too, which inspired Lincolnwood to consider doing so as well.
In 2018, the Lincolnwood Traffic Commission didn't think much of the "Stop Means Stop Program."     "The Commission discussed the facts that the program is discouraged by the Illinois Department of Transportation, it contributes to sign clutter, there are no warrants or standards and there is no available evidence to suggest it improves safety or compliance."
Ouch. In its defense, the sign made me stop completely, but then I wanted to take a photo.  Street sign clutter seems a real concern, to some people, but to me that's one of those criticisms that says more about the observer than the the thing being criticized. "There are too many street signs." That's like complaining there are too many molecules flitting through the air. Or am I making the mistake of treating a genuine concern lightly just because I don't happen to share it? I thought the thing was cute. Then again, I've seen it once.