When Anderson’s Bookshop in Naperville announced June 9 that someone is plucking books from their displays and hiding them in the store, they didn’t specify what sort of books are being taken.
I assumed the stashed volumes were books about queer youth and trans acceptance and such, the segment of human behavior currently singled out for special harassment by those who feel entitled to establish limits on human nature that maximize their own comfort.
But that isn’t the kind of book being targeted. 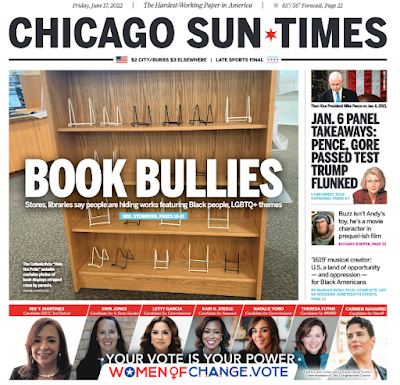 “Any book with a cover showing a person of color on it gets covered up,” explained Ginny Wehrli-Hemmeter, director of events and marketing at Anderson’s, 123 W. Jefferson St., one of the largest independent bookstores in the Chicago area.
About 50 books have been found tucked behind other books. Police have been notified; a man, caught in the act, was confronted.
Nor was my next thought — that this must be a freakish anomaly — correct. Can people really be offended by the sight of a children’s book about Jackie Robinson? In 2022? This has to be the handiwork of some lone-wolf, west-suburban hater indulging in repairable acts of racism, I figured.
Sadly, it is not.

While other large independent bookstores in and around Chicago — the Book Stall in Winnetka, Powell’s in Hyde Park — do not report similar vigilante mischief, it is endemic at public libraries around the country.
“The books overwhelmingly being targeted deal with the lives and experiences of LGBTQ persons,” said Deborah Caldwell-Stone, director of the office for intellectual freedom of the Chicago-based American Library Association.
But it is by no means limited to them. The lives of Black persons also are a particular focus, she added, “under the false idea that books about Black people are some kind of ‘critical race theory.’ There is a lot of rhetoric that’s being used to vilify these materials. It’s truly tragic.”