Northwestern University had no humor magazine when I arrived in the fall of 1978. There had been one, The Purple Parrot. But it was a dusty relic occasionally spied in a glass case in the library in displays about student life in the 1940s.
But it did have Robert Leighton, and the future New Yorker cartoonist and professional game-meister set about creating one, called Rubber Teeth, for "biting satire that doesn't hurt." I was lucky enough to be living down the hall from him in our giant freshman dorm, and so was able to help.
At least I hope I helped. I was there, doing stuff, for four years. Though if I had my way the thing probably would have been called "Razor Teeth."
Flash forward 40 years.
Facebook has devolved into a place where posting today's lunch is too cutting edge and relevant, and oldsters such as myself wallow in the warm mud of nostalgia. A classmate remembered the parody of the Daily Northwestern that we did senior year, and how it included an item that was a comment on the short shrift the student paper gave women's sports. I happened to have the parody issue at hand — thanks, again, to Robert, who went to the trouble and expense of binding up the four years worth of issues we produced into a lovely red keepsake volume, with the newsprint issue tucked inside.
I'm not a fan of the TV character joke names. A bit much. And the misplaced possessive might be an actual error rather than a comment on the Daily's copy editing skills. But the joke conveyed in the parody story, reprinted below in its entirety, is, alas, still relevant enough to be funny. A study at Purdue University last year found media coverage of women's sports is the same now as it was 30 years ago. 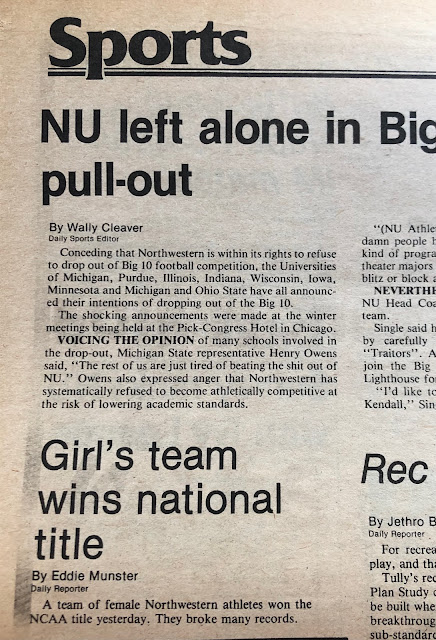