Flashback 2010: Hockey diehards can take cue from this opera buff

It's flattering to have your work remembered. Even when Facebook first has to spur the recollection.
"I shared a pithy comment of yours 12 years ago and it just popped up on my Facebook feed," social media prompted one reader to write this week.
I read the comment, and was surprised. The line almost sounded like a comedy bit. "Did I write that?" I replied. "I have no memory." Then promptly set out in search for the quote, finding a fun column, posted below. It was back in a time when the column covered a full page, in several sections, and included a joke at the end. 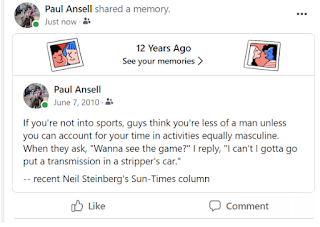 Though there is inevitably mitigation that comes from all honors and praise, which are accepted at one's peril. As you'll see if you make it to the end. Humility often comes, not by choice, but unnecessity.

"Patrick Kane is in the restaurant," says Grant DePorter, checking his BlackBerry as we file into FBI headquarters.
I quickly try to assemble my features into an expression of enthusiasm, but don't do it fast enough, apparently, because Grant, who as managing partner of Harry Caray's has an eye for detail, detects a certain blankness.
"You do know who Patrick Kane is?" he says, narrowing his gaze.
"Sure!" I bluster, immediately deploying my Emergency Sports Conversation Algorithm (a logic tree that works like this: 1. What team is currently in the news? The Blackhawks! 2. What player on that team is currently being celebrated?
"Of course," I bluster. "He's the guy who lost his teeth."
"No," says Grant, with a hint of frost. "That's Duncan Keith. Patrick Kane is one of the biggest stars on the team. He went to Harry's after the Cubs game. So did Jonathan Toews — the captain — Brian Campbell and Adam Burish. They walked in, one after the other."
"Wow!" I say. "Exciting!"

I would never mention this embarrassing exchange, but Richard Roeper's column Wednesday commented on the bandwagon syndrome — how a team, such as the Blackhawks, nearing the championship will spur fair-weather fans and Johnny-come-latelies to try to muscle in on the glory, and how longtime fans tend to resent that because these newbies have not suffered through years of waiting and hoping and thus haven't earned the right to savor this moment of pending triumph.
Or so the thinking goes.        It is a curious outlook. When I took 100 Sun-Times readers to the Lyric Opera last fall, we made a point of bringing people who had never been to the opera before. Not so I could harangue them at intermission: "Oh sure, you're enjoying 'The Merry Widow' now, but where were you that grim winter of '94 when we were enduring Berg's 'Wozzeck?'"
No, I was happy to introduce them to something I love, and eager for them to have a good time.
Why aren't sports fans that way? It isn't as if hockey is a limited resource, isn't as if others nibbling at the hockey pie means less for you.
Reading Rich's column — where he rightly concluded that all should happily "enjoy the ride" — sparked the hope that I might actually score a few sports pride points. If hockey fans are contemptuous of those who hurry to join the party now that the Blackhawks are in the finals (starting Saturday against Philadelphia, if all this is news to you), then it stands to reason that they must approve of — perhaps even respect and admire — we stout souls who didn't follow the Blackhawks before and aren't about to start now, championship or no.
Sadly, it doesn't work like that.
"They'll hate you either way," laughed the wife of a die-hard fan. "They hate you if you jump on the bandwagon, but they hate you if you're indifferent, too."
That sounds about right. For the record, I am not indifferent. The Blackhawks seem a fine group of young fellows, and I certainly hope they win Stanley's Cup, for the glory of their fans and for the Greater Chicago Metroplex. I'd still rather weed in the hot sun than watch a hockey game, but then I'm sure most hockey fans would rather strip the paint off an old bench than spend five hours watching "Tristan und Isolde." To each his own.
If this irks you, consider all the reportage and analysis and ballyhoo that this paper will dedicate to the Blackhawks over the coming weeks. And what do those who don't know Patrick Kane from Kane County get? Just this one little column, whispering that it's all right, you needn't feel guilty. You are not alone.

Grant and I were at the FBI for a class. It seemed a piquant detail.

If you're not into sports, guys think you're less of a man unless you can account for your time in activities equally masculine. When they ask, "Wanna go see the game?" I reply, "I can't. I gotta go put a transmission in a stripper's car."
—Originally published in the Sun-Times, May 28, 2010
Editor's note: If you're wondering what the inevitable mitigation was, let me point it out: it wasn't my line. The comments he remembered was me quoting someone else. Oh, and the Blackhawks defeated the Flyers to win the Stanley Cup in 2010. I had to check Wikipedia to find out.