The race to lose to J.B. Pritzker 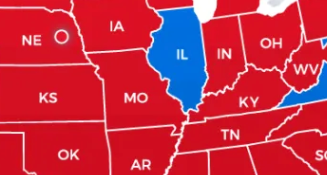 Look at a map.
Illinois is an oasis of blue state humanity in a desert of red state neo-fascism. Here, women's rights, immigrants welcome and science respected. There, the Handmaid's Tale, build-the-wall and science is what the most conservative parents in a school say it is.
So despite the mega-millions pumped into the Illinois gubernatorial race, I haven't really been paying close attention, assuming that whoever the Republicans toss up against him, Gov. J.B. Pritzker has to be re-elected. He battled COVID smartly. He worked with the rebarbative Lori Lightfoot the best anyone could. It hardly matters which Republican neophyte he defeats.
I do have a particular distaste for Richard Irvin, the Aurora mayor and ventriloquist's dummy sitting on the knee of Ken Griffin, the richest man in Illinois, opening and closing his wooden yap while $50 million worth of advertising spews out. Irvin tarred opponents for voting for Joe Biden without ever revealing who he voted for—not wanting to be outed as a former Democrat, or damned as a MAGA wannabe. Wanting to both lure Southern Illinois's considerable population of MAGA zombies to lope in his direction while not repelling off what old style conservative Republicans remain and aren't really paying attention.
Then Bailey got on my radar with a single word. He will stop the "indoctrination" of our children. What we used to call "teaching history," but now Republicans are attempting to slur with their dubious practice of attaching a bad word to something unobjectionable, the way gay individuals wanting to marry each other are described as homosexuals pushing "an agenda."
I'll say it again. No nation is great because everything they did is a chest-swelling jubilee. Part of being a truly great nation is the ability to confront reality, good and ill. Meanwhile, part of being a totalitarian state is fear that the truth will undo you and must be suppressed. Thus, in an undeniable irony, it is the courageous patriot who will stare unashamed at the full, true, sometimes awful history of any country, and the cringing traitor who insists it must be presented as an unbroken triumphal procession, who passes laws trying to ensure that his children pass through the educational system and end up as ignorant as himself.
Give Bailey credit: it works. Ya gotta put the slop where the pigs can get at it.
A Sun-Times/WBEZ poll found Bailey leading Irvin by almost 2-to-1—guess money can't buy everything. Panicking, Irvin rolled out the tagline, “Cut the fat. Clean up Springfield." This is not only a despicable reference to Pritzker's girth, but a sign of typical Republican oblivious, since after years of austerity budgets, there really isn't much fat left to cut. What are they going to take the old meat cleaver to? Social services? Ah, hahahahahahahaha.
I don't want to minimize the importance of a Democratic governor. As the Republican Party becomes the party of sedition, state governors play a key role in either preserving or traducing free elections and a safe vote. Whether the GOP elephant, ravaged by the Trump virus, ends up with either Irvin or Bailey on its back, we have to keep a clear eye on what this race is about: preserving Democratic fact-based, human-oriented policy against creeping Trumpism and fascist fantasy and suppression. Pritzker will win by presenting who he is, while Bailey or Irvin will try to win by pretending to be what they're not.