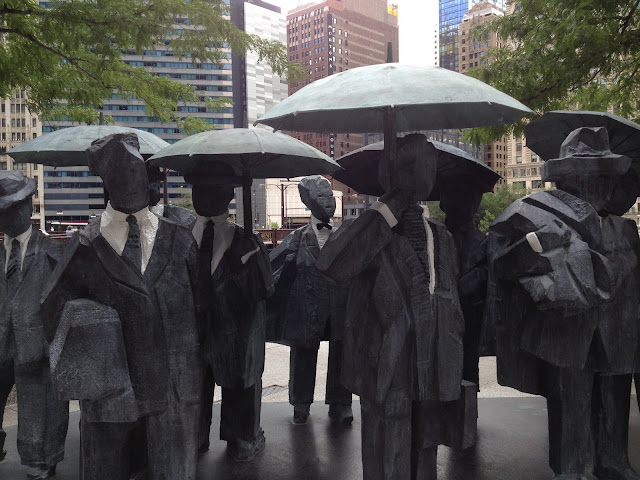 I've blasted public art in Chicago several times, but don't think I've ever explained what first sensitized me to it—when my wife was in law school, she wrote a paper on Irene Siegel's mural in Ravenswood's Sulzer Regional Library, a stark black fresco based on The Aeneid. Local residents and library patrons immediately hated the crude and graffiti-like artwork, protesting the work and suing to try to get rid of it. To no avail; it's still there. A reminder that you need to careful putting this stuff up because, once it's on our city streets, it can be very hard to take down. Not that art should be done by committee or put to a vote, but it was sad to have this brand new, classical and beautiful library open with one room turned over, with very little input from the people who would live with it, to this crude defacement with literary aspirations. I've searched the web for a picture of it; nothing. I'll have to head over this week and take some pictures. It's strange to have an image so controversial not be online -- none of the news articles include photos. Maybe a reader has one...

It’s determining what constitutes the 1 percent worth keeping that sparks debate.
I can’t decide if outdoor art is particularly bad because it’s not hidden away in museums and galleries, where at least you don’t have to look at it. Or because Chicago is uniquely cursed with particularly godawful public art, starting with Picasso’s rusty steel baboon (OK, he meant it to be a lady) in Daley Plaza, to Miro’s imbecilic brush-head doll across the street, to Dubuffet’s horrendous dirty white “Snoopy in a Blender” in front of the Thompson Center (because, you know, Helmut Jahn’s salmon and blue mounded monstrosity just isn’t ugly enough, not without a fiberglass whatsit jammed into the too-small plaza in front of it).
Although, in defense of even the worst public art—that would be the stuff scattered around Oakton Community College, which makes my fingers itch for a blowtorch and a jackhammer—it could be argued that it is better than nothing, which must be the rationale behind the Langham Hotel's push to install Chinese artist Ju Ming's bronze tableau of 11 businessmen carrying umbrellas. A Crain's post by Abraham Tekippe reports that the Commission on Chicago Landmarks, which balked at allowing the scrum near the former IBM Building, the last American office building designed by modernist icon Mies van der Rohe, now says it'll be OK if moved by the river where, one assumes, the statue won't be so noticeable.
The Sun-Times building used to be across the street from that plaza, so I am particularly familiar with it, and had to smile, in an ironic, rueful kind of way, to read the remarks made before the landmark committee. The plaza should "remain open," said an activist who himself lives safely across town.
"Open." This being the same plaza where they installed posts crisscrossed with ropes in the winter, so that what few pedestrians dare navigate it have something to cling to against the canyon-fed gusts that, at times, blew out revolving doors on the building.
The statue "does compromise the overall purity" of the plaza, another expert said.
Well yeah, in the same way that building a house compromises the overall purity of a vacant lot. Mies' brutalist internationalism is a dead end; they were already slipping settees and coffee shops into the bare stone and glass box Mies inflicted upon Wabash Avenue. I have to see this new sculpture before judging, but if it injects a human scale into the severe, the Fueher-Will-Be-Pleased massivity of Mies' handiwork, I'm all for it.
Art is too important to be left to artists, or their advocates. For instance, public statues should never be commissioned by grieving relatives. That's how you get ­­- sorry Pat - such oddities as the Jack Brickhouse sculpture in front of Tribune Tower, its pedestal crowded with carved achievements that would look excessive under a bust of Nebuchadnezar. As for the aborning Roger Ebert sculpture - sorry Chaz - well, let's just ask: What would Roger say about it?
The good news is that we aren't actually stuck with public art forever; it just feels that way. Remember Jane Byrne's "Children's Fountain" in the middle of Wacker Drive? The one that Rich Daley had cut up and carted off, either as a necessary component of traffic improvement or as a big Screw-You-Jane - it isn't as if Daley will ever tell, about that or anything else.
Art should affect people. As much as I personally dislike the Picasso, give it credit: Kids like to slide on the thing. Chicago is blessed with the most successful public sculpture since the Statue of Liberty: Anish Kapoor's 100-ton Bean (or, if you must, "Cloud Gate"). All you need do is watch how people react to the piece, how happy it makes them, the amazement it confers. That's why I liked that giant Marilyn Monroe installed, alas temporarily, next to Tribune Tower. Tourists loved it, loved posing next to it, loved looking up for a peek at Gigantic Marilyn's Gigantic Panties. It was fun, and took the edge off the Gothic horror show of Trib Tower, all flying buttresses and chunks of rubble that Col. McCormick pried out of actual landmarks across the globe.
So welcome, bronze businessmen to the former IBM Plaza. At least soon there will be a reason to go there, once, to eyeball them. And good that the expanse of barren void will no longer be generally vacant, but always occupied by these 11 bronze guys, who can keep an eye on the cyclone-swirled trash. That's something to celebrate, maybe.

A reader notes that my mention, later in the column, of Rich Daley cutting up and carting off Jane Byrne's Children's Fountain suggests it's gone — which I thought it was. It was actually re-located to Lincoln Park in 2005.