Cubs find a way to strike out in the off-season

I had a serious column on the Israeli situation all ready for today. But Tuesday night, I found myself at the ramparts on Twitter, howling— somewhat uncharacteristically — against this new Cubs mascot. In the morning, it seemed too much fun not to work up a version for the paper. The Middle East crisis will have to wait. 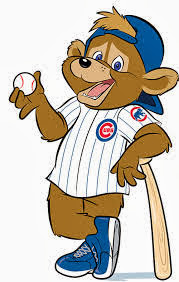 What’s the No. 1 rule with mascots? And it’s OK to cheat, to flip open your textbooks to ‘‘Chief Illiniwek.’’
Give up? Hint: It’s the same as the first rule for doctors: ‘‘First, do no harm.’’
Mascots are not supposed to degrade the brand. They’re supposed to help, to foster goodwill, to spark enthusiasm and affection for your team/restaurant/ university. They’re not supposed to be awful, derivative, generic clip art that drives true fans insane and is a lightning rod for ridicule and contempt.
Meet Clark the Cub, which the team introduced to the world Monday and which, I predict, will be quietly withdrawn sometime in 2016, if not before. Please God.
My immediate, visceral reaction was horror. I could not have been more revolted had the Cubs unveiled as their mascot a severed calf head on a stick, dripping gore and buzzing with flies. ‘‘Holly the Heifer Head.’’ Nor was I alone. The Twitterverse lit up.
''Clark will never survive the true fans' wrath,'' Bob Godfrey of Michigan tweeted.
Deadspin panned the pantless obscenity in a story headlined, with admirable journalistic detachment, ''TheCubs' New Mascot Is A Nightmarish Perverted Furry.'' Clark was presented as part of a Cubs program of ''systematically eradicating everything that's even remotely attractive about them,'' tying the abomination to the conversion of the neighborhood around Wrigley Field into the kind of charmless anodyne baseball mall from which the area once provided rare respite.
What got me about Clark was the eyes — a pain in them, a kill-me-now sorrow cutting through its Smurf-like blandness. One thing about the Cubs, the team always had a vibe, a sense of graphic style — those Steve Musgrave-designed programs, the arcane beauty of Wrigley Field, those wool warmup jackets with 1908 Cubbie Bears on them.
There was something so horribly familiar about Clark, I plunged into Google, looking. Care Bears? The Berenstain Bears? No, even cruder and more ratlike. Aha, Chuck E. Cheese. Closer. Maybe Cubby, the Draw Me Bear? Almost, but not quite.
I appealed to Facebook, and the Hive Intelligence did not disappoint. Bill McCormick disinterred Kit Cloudkicker, from something called Disney's ''TaleSpin.''
''I can actually see Disney suing,'' he wrote.
Let's look at them together; you decide.

The new Cubs monstrosity created such a strong, uncharacteristic reaction of loathing in me, I tried to pull back and see it from the team's point of view. Children do seem to accept these homogenized characters — hence, the aforementioned Chuck E. Cheese — and this excrescence doesn't speak to actual fans but is designed to pacify the sick children it visits in hospitals (thus freeing actual players from the chore, a colleague even more cynical than myself pointed out).
I phoned Grant DePorter, the author of a beautiful book, Hoodoo: Unraveling the 100-year-old Mystery of the Chicago Cubs.
''Way back then, mascots were lucky,'' said DePorter, who also is the CEO of the Harry Caray Restaurant Group. ''You needed a mascot to win the World Series. Maybe that's why they haven't won the World Series in many years - because they haven't had a mascot. If you look at it as a superstitious thing, you definitely want a mascot because it brings luck to the team. I'm an advocate for mascots, for sure. It might be the key we need to win the World Series.''
Yes, yes, but this mascot? The love child of Kit Cloudkicker and Chuck E. Cheese?
''Have you looked at mascots around the country?'' DePorter asked. ''It's amazing how people respond to them. People love mascots.''
I did as he suggested. Orbit and Paws and Screech and Sluggerrr, DJ Kitty and the deeply weird Mr. Red. Oh. My. God. Point taken. If the obvious intention of the Ricketts clan is to make the Cubs exactly like every other franchise, then they've taken another big step. What's next? Astroturf?
So hold out hope. Maybe DePorter is right. Nothing is forgotten in baseball, and maybe 100 years from now, in some unimaginable bicentennial history, The Cubs: 200 Years of Bitter Disappointment, there will be Clark the Cub illustrating ''Chapter 69 - The Ricketts Years: The Blundering Continues.''