Each society picks one of many paths 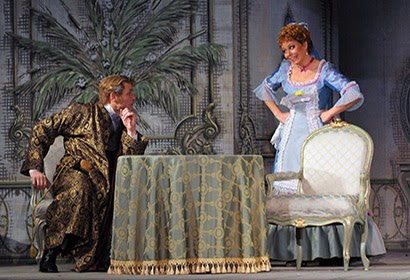 It was a long week, between the crazy weather—a 50 degree shift, from 15 below Monday morning, to 35 degrees now—and more than the usual work. Phone calls and interviews and fact-checking. Whatever the reason, I just felt ground down. I even took the Brown line down to Congress instead of hopping on a bike.
"Thank God it's Friday" I told co-workers on the elevator, not a usual cliche of mine, as I gratefully left the office and headed over to the Lyric Opera to see Johann Strauss' "Die Fledermaus," a sugary linzer torte of an operetta, with catchy tunes and dancing girls and a plot of masquerade and mistaken identity. The first act takes place in a sumptuous house, the second in a palace, the third in a jail, and it was good to see the Lyric return to its gorgeously ornate sets -- no bare stage with a strip of neon here—lush scenery and colorful, intricate costumes. No bats however — "Die Fledermaus" is "the bat" in German — but there was a guy flapping around in a bat wing costume, at one point.
The superb cast is headed, aptly, by an actual Austrian, soprano Daniela Fally, who plays the saucy parlor maid hot to shuck her duties and head to a fancy party, unaware that she, like  the rest, is being drawn into a velvet trap -- "The revenge of the bat" — an elaborate prank, sort of the 19th century Viennese version of "Punk'd" with music and lots of Champagne.
There are many reasons to love these Viennese operas -- Franz Lehar's "The Merry Widow" is also a favorite.  Not just for the music, but the wit, the easy immorality — everyone in "Fledermaus" is cheerily cheating on everyone else, or trying to. The constant drinking, the unashamed adoration of wealth. It probably wasn't all that great to live through, especially for the majority who weren't wealthy. But it sure is fun to watch.
Despite the pure entertainment value, I can't help but find myself wondering where they went wrong, the Germans and the Austrians — Strauss was an Austrian, and his life overlapped for 10 year with his countryman, Adolf Hitler.  Here they were having so much fun. And then ...
Okay, stop. Not much upside in going there. History is set, done. But the future is not. It is yet to be determined. And the only thing to do after contemplating the Road Not Taken for the light happy people who wrote entertains like "Fledermaus" is to recognize the various elements at work in every country, in our own country. America is a light happy place, too, as well as a dark dangerous place, with deep poverty and ignorance, abundance and education, all grabbing at the steering wheel, trying to point our country in one direction or the other. It matters which direction we steer. Is health care a basic human right, or a kind of intrusive government oppression?
So which will it be? If the United States is to become a xenophobic nest of heavily-armed haters, well, you can't say the seeds weren't there. Or if we are to somehow hold onto our progressive freedoms, our respect of diversity and social progress? We see the tug-of-war, and sometimes wonder if it's worth it. At least I do.  After Chris Christie ran into his traffic jam scandal this week, I dipped into the Troglodyte Right Wing press -- the Drudge Report, He-Who-Must-Not-Be-Named at the Tribune, that sort of thing, to see how they were spinning it. Oh. My. God. It was almost breathtaking, the warped, nasty blowback, a realm of almost pure hallucination. How to argue with that? And what's the point? The temptation is to draw back, shiver with disgust, leave the field, lose oneself in art. Turn up the opera. Let them fight over this thing.
But art refreshes, thank God, and I left "Die Fledermaus" renewed to my purpose.  It was dark and rainy and slushy and Metra is still having trouble making the trains roll. But none of that bothered me. Seeing something so light and funny and happy, and done so well, is a bracing reminder to push for the good.  This is the point. To keep ideology from squeezing out our quirky musical selves. To hold onto what's good.
And it is a good production. I won't review it, but the cast was outstanding. Emily Fons' archly scowling drag turn as Prince Orlofsky and Bo Skovhus' eagerly debauched yet somehow naive Gabriel von Eisenstein. Fred Wellisch's happily drunken turnkey Frosch has the best line of the night, trying to silence a singing prisoner with, "You're not in an opera house!" It takes a second to register and the audience laughs, because of course, we are in an opera house.  There's a lesson there -- we forget we're in a place where we can always hear music, but we really are. Frosch shuffles off with "and now it's time to make room for the Mayor of Toronto," one of the several topical references that help keep the humor fresh. He didn't say "make room for Rob Ford," because not everyone would know the mayor of Toronto by name, despite his extreme notoriety.  Which has to be encouraging too. Politics is forgettable and temporary, but important. Art is memorable and permanent, but unimportant, in that it doesn't set the policy of the day. But art is in another sense keenly important, in that it revivifies those who fight the good fight. Which starts up again on Monday.  There are also three more performances of "Die Fledermaus" next week, so if the walls close in, you'll know where to go.

Photo by Dan Rest, courtesy of Lyric Opera of Chicago