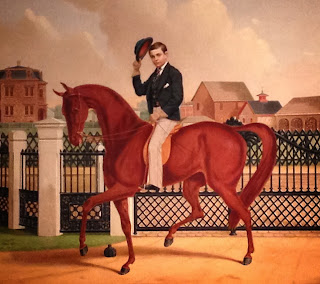 "All is quiet on New Year's Day," to quote U2. But that wasn't always the case —  Jan. 1 was once a day of boisterous, ritual party-making across the country, as anyone with a home worth showing off set out refreshments and welcomed literally everyone who wanted to stop by, starting, for the first 142 years of this country's history, with the White House. That seems something worth remembering.

One hundred and forty-two years is a long time, and you’d think that a cherished American tradition of that length, one that involved some 30 presidents, starting with George Washington and ending still within living human memory, would be at least faintly recalled on New Year’s Day, when it took place. But it isn’t.
On every New Year’s Day from our first as a nation with a president, in 1790, to the last observed in the White House by Herbert Hoover, in 1932, the doors would be thrown open and any American could walk in and shake the president’s hand. Thousands did.
Washington’s first New Year’s reception was in New York, where the nation's capital first was located, then Philadelphia. Several hundred people attended, some grudgingly.
“Made the President the compliments of the season, had a hearty shake of the hand,” Pennsylvania’s first senator, William Maclay, noted in his diary on Jan. 1, 1791. “I was asked to partake of the punch and cakes, but declined. I sat down and we had some chat. But the diplomatic gentry and foreigners coming in, I embraced the first vacancy to make my bow and wish him a good morning.”
That’s why you’ve got to love history, not the whitewashed, grade-school history, but history as lived by a senator keen to escape the clutches of the father of our country.
John Adams began receptions in the current White House in 1801, and his successor, Thomas Jefferson, started the tradition of shaking everybody’s hand — a practice his successors would loathe. Martin Van Buren refused to serve refreshments, to keep the crowds down. William Howard Taft’s hand was so swollen the day after shaking 6,000 hands in 1910, it had to be bandaged.
If you wonder why the president would even bother receiving people on New Year’s Day, the answer is easy: that’s what people did. In the days before telephones, nevermind the Internet, you visited. There was an elaborate ritual of leaving visiting cards, of etiquette, which of course was not always observed, particularly on New Year’s, when the tradition was to serve punch to guests.
“It frequently happened that young men, after having made six or eight calls and stopping at six or eight punch bowls, became intoxicated, causing distress in the houses which they next visited,” wrote historian George William Douglas. “Bibulous young men, attracted by the prospect of free punch, would force their way into houses where they were not known.”
As ugly as that must have been, the scene wasn’t much better at the White House. If you think it would be nice to have gone there for a New Year’s reception, think again.
“The guests are often compelled to stand for hours in a line outside, exposed to the elements, whatever they may be, whether clear or stormy, warm or cold, windy or calm, the waiting line moving forward towards its goal a step at a time, with long intervals between each step,” Helen Hakcourt wrote in 1911. “Many reach the receiving party worn out with fatigue, and with their elaborate costumes all awry, if not actually torn to ribbons, and are shot through the door as though from a mortar by the relentless pressure behind, and in such a dazed and confused condition that they pass by the President to reach whom they have endured hours of almost danger without so much as seeing him.”
The practice was ended by Herbert Hoover who, bitter at losing to Franklin D. Roosevelt, skipped out to Florida for New Year’s 1933. FDR never revived it “as his lameness made it difficult for him to stand in the receiving line for any length of time,” as one commentator wrote in 1937.
Our current president, Barack Obama, has vanished to Hawaii, and as his sagging popularity is dissected, I can’t help but think of Pennsylvania Sen. Maclay. Not only was he hot to escape George Washington, but he hadn’t planned on going to the reception.
“Just as a I pass’d the president’s house,” he wrote in his diary, an acquaintance bid him go in to the reception but, being in his “worst clothes,” he begged off. A few steps later, Maclay “had, however, passed him but a little way, when [Samuel] Osgood, Postmaster-general, attacked me warmly to go with him. I was pushed forward by him, bolted into his presence.” Of course, Maclay had served in the Continental Army under Washington, so maybe he already had his fill. He also belonged to the Anti-Administration faction that had opposed ratifying the Constitution — does that sound familiar?
That could be our resolution for 2014: to see history, not as we wish it were, but as it actually was, and do the same for life today.
Or heck, why expect anyone to start now?