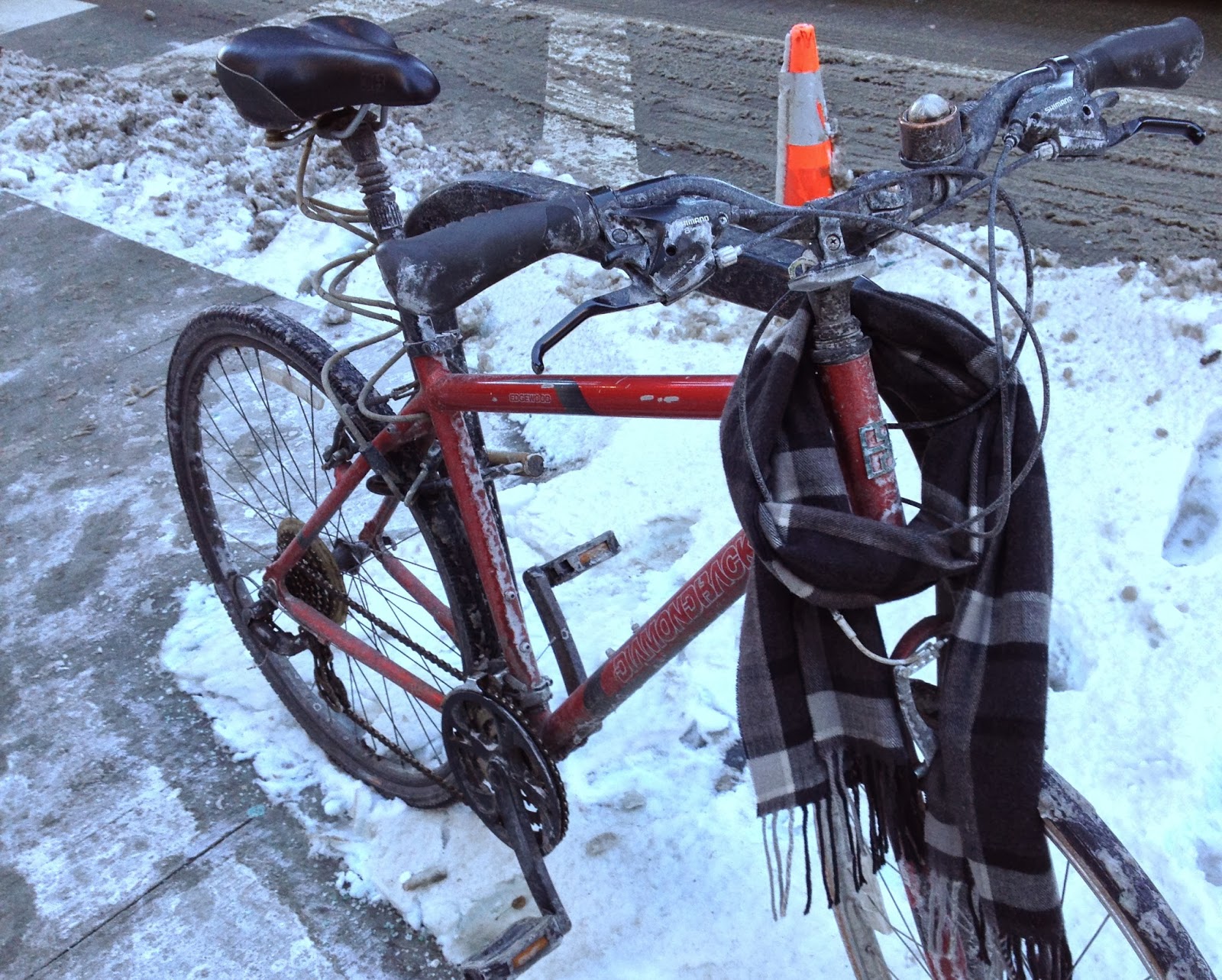 A balaclava cuts your peripheral vision, which is just as well, because that helps with the and-away-we-go swan dive of trust you must execute to make a left turn in rush-hour traffic on a Divvy bike from Lake Street onto Wacker Drive. A quick leftward jerk of the head, more symbolic ritual than actual glance to see if you’re about to be creamed by a truck.
Tuesday morning, 9 a.m., five degrees below zero. I had considered staying home. But our mighty nation was not forged by men staying home, padding around in their slippers and keeping track of the temperature on The Weather Channel. So even though, stepping out the door, the air felt almost solid — something jellied, frozen — I took a big searing lungful and headed toward the train station.
Being outside for more than a minute was like doing the breaststroke in liquid nitrogen. At first. But you get used to anything.
The Metra gods were smiling, and we got downtown only 20 minutes late (going home, it would be 40 minutes late). Finding out whether Divvy was up and running seemed a doable cold-weather task. Three weeks ago, when it was minus 15, they shut the system down — to protect Divvy workers, they said. But it was 10 degrees warmer now and besides, there is a certain boy-who-cried-wolf quality to official reaction to extreme weather conditions the second time around. The first is expected. The next seems unnecessary, an awkward blend of timidity and luxury. Chicago Public Schools leaders were denounced for closing too tardily earlier in the month and risking children’s lives, then damned again this week for closing at all, with aldermen idly speculating that the schools should be kept open as a day care center for kids whose parents have to work. Bad idea. If you’re going to do that, you might as well keep the schools open and teach the kids who show up. Remember, on an average day, 9 percent of CPS kids don’t come to school whatever the weather. It would be nice to think that parents concerned their kids might freeze on the way to school due to the extraordinary weather would keep them home while the rest could go. But if CPS could rely on that level of parental oversight and discernment, then half its problems would be solved.
The first bike port outside Ogilvy Station stayed red, and I thought the system was down. What kind of weaklings and cowards are running this thing? But the next: green. While I rolled my bike out, a second heavily bundled idiot, to my surprise, took one too.
“Nice day for it,” I said, always the conversationalist, and he grunted something through his face mask and yanked the bike.
I eased the blue bomber onto Canal and began pedaling north. Traffic backed up turning right onto Lake, and I threaded my way forward. Riding a Divvy in subzero weather is like whitewater rafting or exploring a cave — something that sounds a lot more daring than it actually is. The trip took five minutes versus 15. I never felt cold because my full attention was focused on not being crushed by a cab. The streets are dry.
Since last I wrote about Divvy, the Montreal-based supplier of the bikes and assorted docks and systems, the Societe de Velo en Libre-Service, called “Bixi” for short (a mash of “bike” and “taxi”), filed for bankruptcy, claiming $46 million in debt, in part because two disgruntled customers, Chicago and New York, withheld $5 million due to problems with the software. The middleman between the city and Bixi, Alta Bike Share of Portland, Ore., insists the mother ship’s financial woes won’t affect the bikes. Perhaps, but it already has affected the perception of the system, from cheery civic embellishment to potential parking-meter-scale disaster. Or maybe it’s just me being cranky; I like the bikes and would hate to see the system fall apart.
While I was on the topic, I checked with the city to see if we’re any closer to having a sponsor for Divvy. New York got $42 million from Citibank to brand its bike system. Chicago got nothing. The city says it’s more complicated than that.
“We got $25 million in federal grant money that paid for the initial build-out of the system,” said Peter Scales, Chicago Department of Transportation spokesman. “Because we had those grants, we didn’t need a sponsor at the outset to fund the equipment purchases and were able to establish a brand that was uniquely Chicago.”
I guess. Though I don’t see why the city couldn’t have gotten both the federal cash and a lucrative sponsor. With all our money woes, are we not monetizing whatever we can? The new bike share system should have been a no-brainer. Scales said the city is still looking for a sponsor, which strikes me as sort of late. But better late than never.