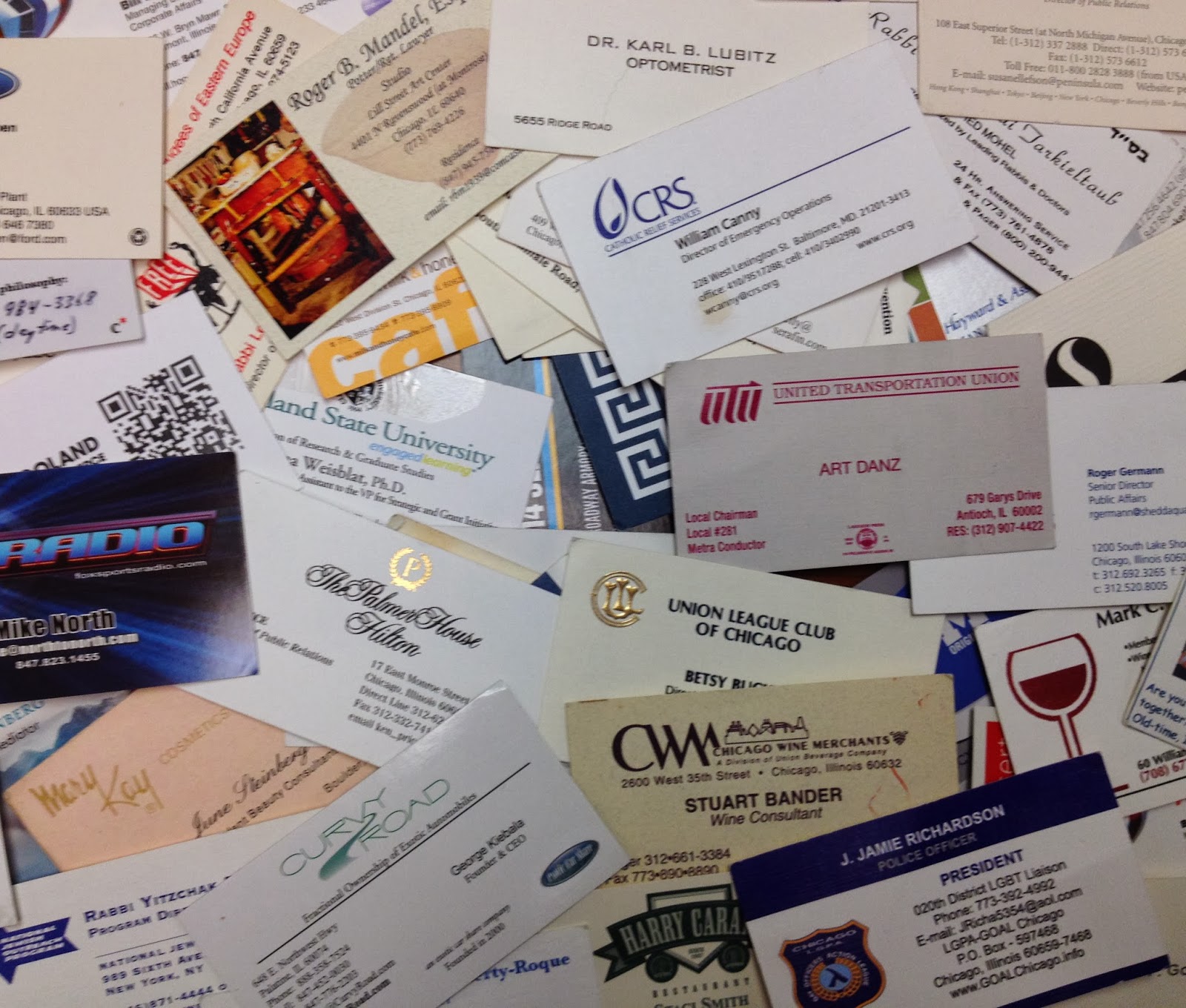 If I were to come up with a new technology that would take your business information — name, phone number, address, the logo and particulars of your place of employment — and somehow worm that data into the lives of random people you met, where it would live for months and years and decades, popping up now and then, I bet I could score big on the technology front. Give it a funny name: “DataBlast,” sell stock.
Alas, business cards are low tech, 31/2-by-2-inch rectangles of stiff paper. A centuries-old technology, the descendant of calling cards. And I’m finally getting rid of mine. All of them.

Ethan Matlin, Fiddler. Junaid M. Afeef Esq., The Council of Islamic Organizations of Greater Chicago. Roel M. Doherty-Roque, Police Officer, 20th District/Lincoln Station.
Blame it on not having a proper New Year’s resolution. I’ve already lost weight. I still don’t drink. Somehow my attention was drawn to all this clutter, drawers of stuff, papers and files and coral reefs of useless junk that I have set aside for some purpose and now are just in the way. I figured, get rid of it. I figured, start with the business cards.
Why not? Some are for defunct establishments: LaSalle Bank, now part of Bank of America. Aigre Doux, now the Gilt Bar. The Division Street Russian Bath, now enjoying a second, snazzier life as "Red Square."
Some are from defunct people. Phil Pagano, the Metra chief who stepped in front of a train. Did I really meet him? I don't recall. But I must have; I've got his card.
Some I kept, intending to write stories. I have several cards from the Cactus & Succulent Society of Greater Chicago, picked up during its annual show at the Chicago Botanic Garden. I always meant to join, not out of any particular love of cacti, but out of the charmed notion that there would be all these comic political dramas going on in the society, bitter power plays and raging conflict. But it seemed too unhinged a project, even for me, and I never followed through.
I did actually pay dues and join the Napoleonic Alliance ("William Hurlbutt, President") and found myself at its annual dinner, holding a glass of Champagne high and crying, "Vive l'empereur!" Can't make that up. The phone's disconnected now.
Martin L. King, chairman, Rainbow/PUSH. Frederic P.N. Chang, vice minister, Republic of China. Colin Hall, Allen Edmonds Shoe Corp.
The cards got me wondering — with email, LinkedIn, Facebook, you just don't go digging for business cards the way you used to. How are they doing, as a product?
"People still need them," said Jack Serrano, partner/manager of AlphaGraphics, one of the larger producers of business cards in Chicago. "They're a good tool and a big part of my business. Especially traveling overseas. Huge in Asia. You can't say hello without a business card."
That's even true in this country. People who don't have business cards are unemployed. (Though there must be a separate column in the jokey, grandiose faux business cards that newly retired men seem compelled to print up for themselves. They strike me not as dashing, but desperate.)
Serrano said the trend is toward double-side, with shiny stock — like Susan Goodenow, vice president of branding & communications at the Chicago Bulls, whose card lists their six NBA championship years on the back and has rounded corners, another popular touch. Hers, I'll keep.
The Chicagoland Chamber of Commerce has a square QR Code — you take a picture with your phone and it gives more info. It looks like a black blot, to me, but then a few years ago I thought people who wore their security passes on a lanyard around their necks look like sheep. Now I wear mine.
Some cards yanked me back to where I got them. Touring UIC's Illinois somber Craniofacial Center with Dr. Mimis Cohen, Division of Plastic, Reconstructive, and Cosmetic Surgery — facial prosthetics. Some left me puzzled: Who is Alexander A. Babich and what is the American Multiethnic Educational & Promotional Center? No clue.
I couldn't throw them all out — Robert W. Fioretti, never know when I need to call him. And some were personal. June Steinberg, Independent Beauty Consultant for Mary Kay Cosmetics (Hi mom!). Rabbi Mordechai Tarkieltaub, Certified Mohel. Circumcised both my boys without a hitch. In business? Dial the number. A come-on for a Bahamas cruise. "You'll have a fabulous time on your free Bahamas cruise. Press one now." Pass.
Posted by Neil Steinberg at 12:00 AM