Tomatoes to the rescue 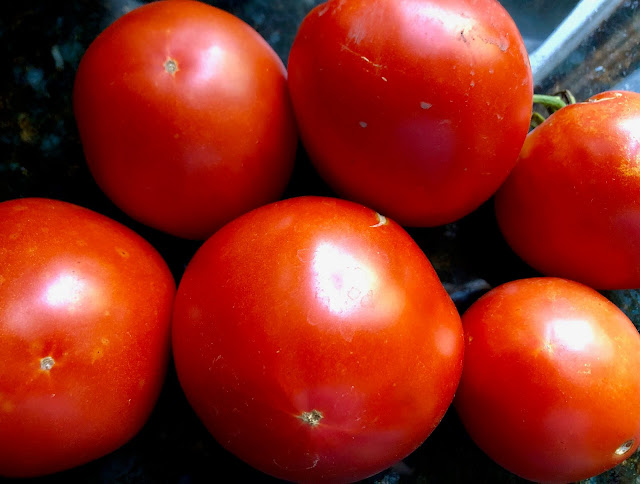 How many years? Three. Four? Maybe five? So many that I was starting to feel stupid even planting them at all. Like some crazy man who every year dug out all the weeds and grass and crap from a 10 x 10 plot in the backyard, bought six or seven tomato plants at $4 or $5 a pop, then carefully planted them and caged them, and religiously watered them, knowing full well that the plants would grown, but would never grow tomatoes. Then in the fall, or winter, or early spring at the latest, I'd reverse the process, dig up all the miserable desiccated failures, return the twisted tomato cadges to their spot behind the garage for another few months, until it was time to repeat the process after Mother's Day.
Year after year—and here's the sad, sick thing—I had given up the hope of growing tomatoes. I didn't plant a garden because I expected tomatoes. I just planted it because it was one of the nutsy futile time-wasting things I do, like writing books.
OK, I exaggerate. There were tomatoes. Hard, green spheres that were even worse than nothing at all. The promise of a tomato. Then a long span of waiting. Then a stone mockery.
Not this year. First the cherry tomatoes came in, a ruby red vanguard. They arrived in platoons. En masse. They were sliced into salads and popped, liquid sunshine, into my mouth standing in the garden. They're out there now. I can't eat them fast enough. 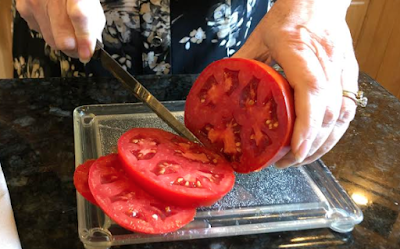 But the cherry tomatoes were just the opening act. To my amazement, they were shoved off center stage by the Main Event. These big guys, the size of baseballs, and in quantity. It didn't even matter if the squirrels got a couple, because there are a lot more where they came from. We filled our arms with tomatoes and took them back to the house. My wife put them in salads with fresh mozzarella and basil—also grown in the garden—dribbled with fig vinegar. Tomatoes accompanying omelets, or just set out with fresh fruit as finger food. They are that good.
I have a way of anthropomorphizing inanimate objects. I can pity a lost sock, picture it slouched on a wooden bench in bus station in Toledo, having slipped out of the dryer and set out searching for a truer mate.
So it was easy to see these tomatoes, which are animate, in a low key vegetative way, as benign protective forces, these big red beasts, lumbering onto the scene, lending a hand. Heroes, arriving as they have in the weirdest summer ever. Deciding, in their tomato wisdom, to show up now.
Well, I can't help but suspect that it was intentional .Maybe the tomatoes were withholding their forces. Waiting in reserve. Like reinforcements. Knowing how massively 2020 was going to suck, with its COVID-19 and economic entropy, its travel bans and our jabbering dupe of a president growing more unhinged by the hour, the looming November election giving off shrieking warnings of impending calamity, shrill sirens that rattle your teeth.
Sure, the tomatoes would have added flavor and color to 2019. Or cheered up 2018. But would we have appreciated the way they're appreciated now? I think not. Fresh-picked tomatoes I grew myself are a lifeline in 2020, a reminder that not matter how we fuck up the world, with our carnival of cretinism politics and our shredded social fabric, our bottomless fear and outsized hatred, that we can't touch tomatoes. They come through in a pinch, in their own sweet time, sometimes when we need them most. 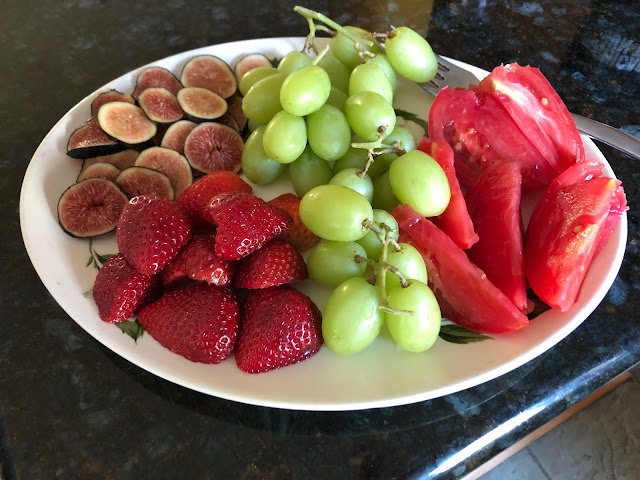