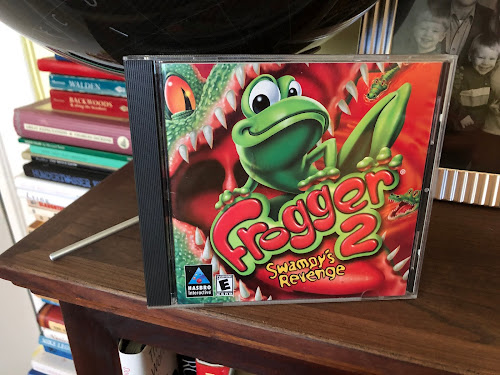 People cling to stuff, and it accumulates.
That was especially true for me. I had trouble getting rid of possessions, precious relics all, debris from my ruined palace of self. Maybe if I held onto it, I could build the past back up someday...
Lately I've been better. Having seen my wife having to dispose of her parents' possessions—her mother had 11 roasters—I'm keen not to put our own kids through that. So stuck at home, and with a vacation last week, we went at the basement. It helps we have a grand-nephew now, crawling like nobody's business, who we can deliver plastic crates of toys and books to.
The old video games were pitched. Don't write in to tell me they were valuable and I could get as much as $3 a pop on eBay. Not worth the time. Not thrown away, but taken to Goodwill. Maybe someone else can use them.
Except this one. It's going too, but it is infused with a tale, and I have to wring the story out before I discard the rind.
Frogger 2: Swampy's Revenge, the second version (I assume) of the vastly popular kiddie video game where bold-if-reckless amphibians are sent hopping across busy highways. The small print on the back says it was released in 2000, which sounds right. My boys would have been 3 and 5, freshly moved to this house.
The game was brand new, and they really, really wanted it. I don't remember this part, but pleading was usually involved. Out-of-stock 0n Amazon (it's scary to think Amazon is 20 years old—it's actually 26, and started selling computer games in 1998).
It's hard for boys to wait, and I had an idea. Online might be overwhelmed, but there was still the living world. I swung by the Borders on Waukegan Road, made my way to their music and video games department, and sure enough, there was Frogger 2.
An ordinary dad would have purchased the game, brought the thing home and delivered it to my jubilant lads. But I am not that dad; I had a kink in my programming that caused me to look for the more ... ah .. whimsical route.
I deposited the game in our mailbox, then went upstairs.
"Should we see if Amazon has Frogger 2 in?" I said, settling in before the computer, a boy on each arm. I scrolled quickly past the part saying it wasn't available.
"It is!" I said. "Should I order it now?"
"Yes yes!" the boys cried in chorus. "Now now!"
I pressed the order button with an exaggerated plunge of the finger.
"There!" I said, ignoring all the other screens needed to settle credit cards and shipping before the order was actually placed.
I waited a moment.
"Okay!" I said, hopping up. "Let's see if it's here!"
We all ran downstairs and burst outside, and tore open the mailbox.
"It is! It is!" the boys cried, faces aglow.  We headed upstairs in joy and triumph.
If that's all there were to the story, I would never tell it. But there is one more part, as we headed up to the computer to play, a moment occurred afterward I always cherished. Crossing our front room, heading up the stairs, our older boy paused.
"Hey," he said, or words to that effect. "Wait a minute...."
Something was amiss. The brief time that elapsed between clicking the button and the game arriving in our mailbox. That was ... awfully fast.
That "something's wrong here" reflex is key to the intellectual development of any adult. Not every adult, sadly. Lots of people never acquire it, which is why Donald Trump is president of the United States. But the ability to grasp that something—even something that is good, something you want—just doesn't make sense is as precious as gold.  It serves me well, and I'm proud I've passed it on to my sons, who it will no doubt will continue to benefit.
Frogger 2: Swampy's Revenge goes to the Goodwill, eventually. Though I might keep it on my shelf for another couple decades first, as a token a of a father's small prank, and a flash of nascent skepticism in a 5-year-old.