Quick to react to the peril that wasn't there 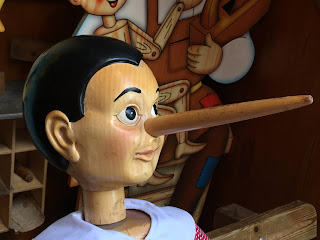 One of the many challenges of being a liar is you have to keep track of your fabrications. If I claim to be the King of France on Monday, that claim is undercut—for those who care about such details as actual reality—if on Tuesday I claim to be Emperor of Austria. Which is it?
During the dystopian nightmare of the Republican National Convention last week, the president and his enablers claimed in chorus that Donald Trump was quick to grasp the threat of COVID-19 and react decisively.
“We developed a wide array of effective treatments, including a powerful antibody treatment known as convalescent plasma,” Trump said—a double lie, since the process has been around for years. This, he said, “will save thousands and thousands of lives.”
Save thousands of lives from what? On Sunday, during a barrage of 89 early morning tweets and retweets, Trump shared a Q-Anon conspiracy theory that the vast majority of COVID-19 deaths were misinterpretations or fabrications. That only 9,210 people have died of the virus, and "this week the CDC quietly updated the Covid number to admit that only 6% of all the 153,504 deaths recorded actually died from Covid." 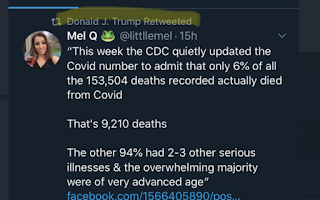 Which is it? France or Austria? Did Trump leap to boldly respond to the pandemic peril? Or was there no peril in the first place?
This of course only matters to those of us who live in the world of reality, who are trying to keep alive in country where our leader is a delusional, traitorous sociopath, surrounded by fawning toadies. Who simply want our actual problems to be perceived and coped with, as opposed to ignored then lied about.
That will never happen in a Donald Trump administration. To him,  there is no lie so enormous it can't be plastered over with more lies. He doesn't bother to keep track because he demands that we don't keep track either. And millions of Americans, incredibly, tragically, are all too happy to comply.
On Monday, Twitter took down Trump's false tweet. You know you're in trouble when a freewheeling social media site is acting as a reality check for the President of the United States.
Spoiler alert: we're in trouble.