Debate all crosstalk and confusion 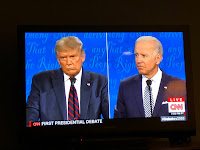 "Maybe 'debate' is not the word to use to describe tonight’s event," Princeton historian and CNN commentator Julian Zelizer tweeted a few hours before the brawl between President Donald Trump and former Vice President Joe Biden on Tuesday.
Prescient. Although you didn't have to be Nostradamus to see that coming.
Though "debate" might be the word for it. The first definition of "debate" in my Oxford English Dictionary is "To fight, contend, strive, quarrel, wrangle."
Sounds about right. The news networks certainly kept their questionable policy of treating the event like a boxing match.
"A pretty well-matched fight," said CNN's Abby Phillip, ahead of time, introducing what she called "a slugfest."
Though I wrote a column Tuesday morning, the paper asked if we could hold that so I could react to the debate. I was happy to be in the mix, but in doing so I had to whip together the following almost immediately. So if you're interested in what a column looks like written in 15 minutes, this is your chance.
In doing so, I saw how the national media tends to layer a kind of unfair balance over such situations. It's the default mode. The truth was that Trump's lying, bullying manner upended the civility required for real debate, and made it the stressful, unpleasant embarrassment it was.  But that takes five minutes' reflection, at least for me. The pros in immediacy were better at instantly nailing it.
"That was a shit show," said CNN's Dana Bash, live on TV, and to illustrate just how true that assessment is, nobody seems shocked to hear her say it on air. Yes, yes it was.
I didn't quite come out and say that—I was too busy trying to get the words down in some kind of coherent order. I hope it comes through. Yes, good that Joe Biden stood up for democracy and handled himself admirably. Yet the affair leaves any thoughtful person not glad, but sad, and deeply concerned for our country. With two more shitshows left.

“This is not going to end well,” President Donald Trump said toward the end of Tuesday night’s debate — or should that be “debate,” since it was more of an exercise in crosstalk and confusion, the first of three.
He was referring to the election he insists will be “a disaster” with “30, 40%” of the mail-in ballots lost.
But after 90 minutes of his free-for-all with former Vice President Joe Biden, Trump might be talking about the American experiment itself. It’s hard to have watched the mud wrestle in Cleveland and not come away with a certain despair for our country, based on the low state of anything resembling discussion of the issues.
I suppose I should point to parts as significant.
Once again, Trump was pressed to condemn white supremacy. And again, he did the opposite, telling violent groups such as the Proud Boys to “stand back and stand by.”
Stand by for what, he didn’t say. Dog-whistled orders, perhaps.