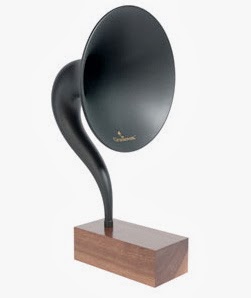 The challenge of this story was not buying one on the spot, not jumping on Kickstarter, putting down the $250, then circling May on my calendar and waiting. But that's a lot of money for an impulsive purchase. Still, I want to have that horn on my desk. want to listen to music coming out of it. So I'll hold off, for now, just to give myself something to look forward to.

Early last January, college friends Pavan Bapu and Jeff Parrish were walking through Wicker Park when they passed an antique store and saw a 1920s Magnavox R3 gramophone in the window.
"We both did a double take," said Parrish. "We ended up tracking them down on eBay and bought one to play around with it."
The graceful curving horn was originally made to amplify thick 78 rpm discs. The two, who met at UIC, decided they could do better.
"We figured out a way to modernize it, to make it suitable for people now," Parrish said. By February they had a prototype: a Bluetooth receiver within a sleek wooden base, attached to the gramophone horn.
"It was pretty big," said Parrish.
Bapu put some images and a description on a website and 500 people liked it. That got them thinking.
"What if we scaled this thing down, made it less intimidating, less filling somebody's space?" Parrish said. "We tried out a number of different sizes, and settled on three-quarters [of the original] - big enough to have amplification and presence, and small enough to fit on somebody's table."
They decided they had something to sell.
Pavan handled the "nitty-gritty electronic stuff" using knowledge he picked up clerking at Best Buy.
"We created our own proprietary audio driver and printed circuit board inside, acoustically optimized for this product," said Bapu, 27. "So we didn't just do a hack job. We put in something that resonates with the harmonics of this horn."
Parrish's background is engineering and industrial design; Bapu's is communications. "Between the stuff I know and the stuff Pavan knows, we've got our bases covered," Parrish said. "We both have a good bunch of contacts that we've got from our time in school and from various employment opportunities since then."
They started out putting drawings online, searching for manufacturers.
"We got quotes from people around the world. It's pretty cool," Parrish said. "Pavan found people by Googling what we need."
They need people to give money, for instance. Pavan went on Kickstarter, saw a video he liked and contacted its creator, who produced a video for them. Their Kickstarter campaign went up Nov. 26. In fewer than three weeks, they've raised $120,000; more than their goal. The Gramovox devices cost $299, or $250 for those who contribute on Kickstarter, and they plan to start shipping in the spring.
As much as I like the design, which I noticed on my Facebook stream, I love that these two guys, who have never started a business before, quickly went from seeing an obscure antique in a window, to manufacturing and selling their own version. "In less than a year we went from concept to prototype to production," Bapu said. That's what our country is about, or should be.
I wanted to hear it, so I biked over to Pavan's apartment at 11th and State. Pavan played Bill Withers' "Ain't No Sunshine." There was a resonance to it. Then Nancy Sinatra singing, "Bang, Bang (My Baby Shot Me Down)." I'm used to an iPod, which has the acoustics of mud, but you could hear Sinatra forming the consonants - the Bs, the Ds - as if she had her lips against your ear. Then Louis Armstrong, "When You're Smiling." What more perfect way to hear a master's horn than out of the bell of a metal horn?
I took my iPhone out to see how the Bluetooth aspect works, and within seconds was playing George Gershwin's "Tip-Toes." It filled the room.
Lest audiophiles descend on me, I should point out it's still a unidirectional 1920s horn. I'm sure any Polk Audio speaker has better acoustics. My perception was no doubt skewed by how much I admire the thing. There's a wonderful aesthetic to the horn, and I'm the son of a radio operator, who has, displayed in my office, his Turner X-22 crystal microphone and his chrome-plated Vibroplex telegraph key, because they're lovely, to me.
Whether the world will find the Gramovox Bluetooth Gramophone lovely too, well, we'll find out in a few months. They ship in May. I can see it as the big audio gift of Christmas 2014 because it looks so good, sounds crisp, doesn't cost all that much and points society back to a place it used to be: where you listened to music with other people, together, out of a curving horn.

They've raised more than $130,000 on Kickstarter, well more their goal. You can see their complete fundraising presentation and excellent video by clicking here.