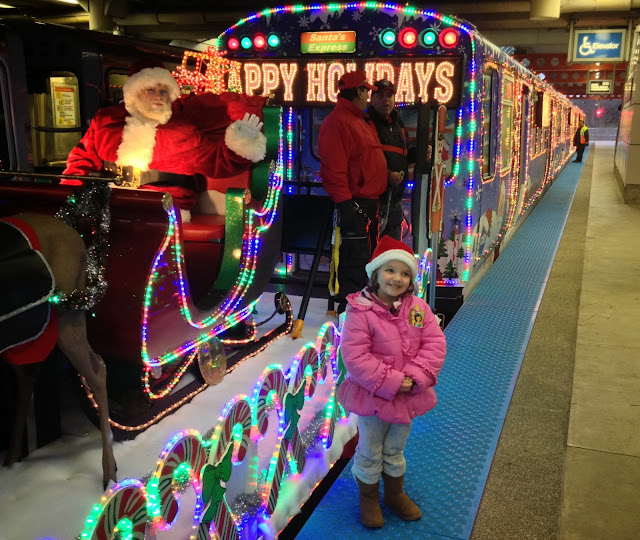 ‘We’re waiting for the Santa Train,” said Sharon Moreira, of Riverside, sitting on a bench with daughter Izzy, 31/2, decked out in a pink Disney princess coat and Santa hat, on the Orange Line L platform at 4 p.m. one day last week at Midway.

Officially, it’s the “Holiday Train,” CTA’s light-spangled, ribbon-wrapped, tinsel-draped, Santa-squiring contribution to Chicago’s Yuletide festivity, but “Santa Train” or “Christmas Train” will do just fine.
“It’s a beautiful thing,” said Jorge Rivera, the train’s driver, who’ll keep it below 40 mph, instead of topping out at 55, in deference to Old St. Nick, braving the elements in his sleigh on an open flatbed car, posing for pictures with kids at each stop.
But not posing for long. One aspect of the Holiday Train that might elude the causal observer is that though it is festooned with lights, staffed by CTA workers dressed as elves, handing out candy canes and Holiday Train schedules (which you can find online at transitchicago.com/holidaytrain) it is also a working L train, costing the usual fare, stopping at every stop, plying a regular route around the city from now until Dec. 23. Thus, its passengers are a mix of delighted children brought there especially by their parents to experience the Christmas magic, and regular commuters who just happened to step aboard this particular train in their journeys from points A to B.
“It’s nice to have bright colors in the gloomy fog,” said Barbara Lamb, of Cape May, N.J., who had just arrived at Midway, along with her sister Carol Kennessy, of Denver, and the two were traveling downtown to meet other members of their family for a city reunion.
They were surprised and pleased to find the Holiday Train waiting for them.
“It was just here,” Lamb said. “It was like, ‘Oh my God, can we ride this?’ It’s amazing.”
“It smells like cinnamon,” Kennessy said.
That it does; cinnamon scent is wafted through the ventilation system (pine was tried, but riders complained it smelled like Pine-Sol) and Christmas carols burble over a PA system that also calls out station stops.
The most unexpected aspect of the train, when you take time to examine it, is the detail. This isn’t a day’s work with crepe paper and tinsel. A complete six-car L train is pulled out of service in September, and the months of October and November are spent getting it ready. The seats are covered with reindeer and Santa material, advertising placards are replaced with ones ballyhooing the North Pole Barber Shop and, perhaps an echo of the hard times still at hand, toy-making jobs available at Santa’s workshop.
The tradition began in 1992 with the CTA decorating an out-of-service train to deliver food baskets to community groups. The public was allowed on the train in 1996.
The train pulled into the State/Lake station. Burl Ives singing “A Holly Jolly Christmas” was interrupted by an announcement. “This is the Holiday Train, making all stops.”
One might think the CTA would have trouble coaxing employees into elf outfits to spend the month of December listening to carols and handing out candy canes. But the assignments are a perk, so popular CTA workers compete — in a contest of transit skills — for slots aboard the Holiday Train.
“I like doing this, being among people,” said Sandra, a CTA employee who didn’t want to give her last name. “To see the excitement on the kids’ faces, even the adults. If you’re not in the Christmas spirit, you come on the train, listen to the music, and it puts you in the Christmas spirit.” 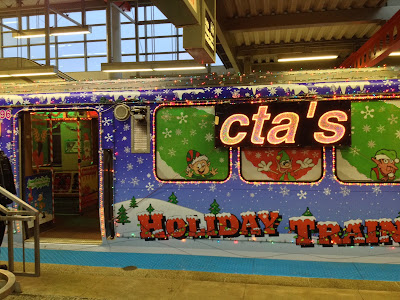