Divvy Diary: If you think it's cold outside, try riding a bike.

We are chaff, blown by society’s breezes. We don’t think so; proud, we flatter ourselves that we are independent mariners, captains of our destiny, raising our sails of free will to tack in whichever direction we please. It only seems that way. Truth is, a few puffs from culture and we toss our hats in the air, quit our homes and go die in trenches at the Somme. 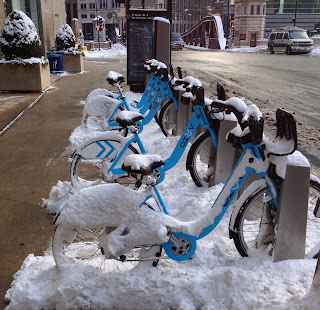 Or jump onto bikes when it’s 20 degrees outside, as I did Monday. It occurred to me, striding toward the Divvy stand at the Merchandise Mart, that I have never before been tempted to ride a bike in winter, never mind done it. What changed? The job demanded I go to 11th and State, a perfect distance to try a Divvy in snowtime. The city gives us permission, making these bikes available all winter, ergo, I must go try it. That logic gets you tangled in barbed wire.
The rack at Orleans offered, at first glance, a row of snowed-in bikes. But closer examination revealed the first truth about winter biking: As long as you aren’t biking immediately after a snowfall, someone else will have already brushed off a bike for you.
So I sidestepped the five snow-crusted bikes and picked a clean one, wordlessly thanking the previous cyclist. I hopped on and crossed east between the Mart and the river (going the wrong way, yes, but it isn’t technically a street and besides, it was convenient. I’ve decided not to be the only cyclist in Chicago who strictly obeys traffic laws).
The Wells Street bridge has that new, green bike lane, and again, it helps to have societal approval, for the city to say, in essence, “You belong here, this is your path.” A kind of benediction, really, and not only did it instill confidence as I rode, but it seemed to affect the midmorning traffic flowing around me with what I perceived as a certain, “let’s not kill him” respect. Or hoped.
The only problem was my hands ...
Though an expert had, in this very column, urged the wearing of mittens when winter biking, and though I had read it — heck, I had written it — and found the advice sound, the drawback was it required one to actually go buy mittens, which I neglected to do. What I was wearing was a pair of thin, Under Armour-like gloves beneath ragwool fingerless gloves I had in my pockets, and though technically “layers,” they were completely inadequate.
By Madison, the pinkies on both hands had gone numb, and I retracted them from the gloves, curling the frosty digits against my palm, a process I repeated for each finger — ring, middle, index — in turn, until I was basically riding with my balled-up fists pressed against the handlebars. Not the safest practice, but it worked. A reminder that newspaper advice is one thing, real-world experience something else entirely.
Nothing tempers the shame of folly like seeing your madness shared, and I am not the only idiot riding Divvy bikes in the winter. Fred Wu, of Roscoe Village, owns six bikes and races on the SpiderMonkey team, but he also is a Divvy member who on Sunday rode his cyclo-cross bike to Montrose, where he left it by the team tent, checked out a Divvy and rode it in the Montrose Harbor leg of the Chicago Cyclocross Cup state championship.
“I did it for fun,” said Wu, enthusiastically cheered by the tough cup crowd. “I thought it would be amusing.” He came in last.
Wu was inspired by cyclists teasing each other about racing a Divvy. The blue bikes (the hue of the stripes on the Chicago flag) have become a de facto symbol of the city. Wedding parties pose with them, as they do with royal blue Citi bikes in New York, a new Gotham tradition (a shame we can’t as easily adopt New York’s custom of making serious money off the bikes; it got $43 million from CitiBank for the branding, while cash-strapped Chicago got zip — another local tradition. The city says it’s working on it).
It took 25 minutes to bike from the Mart to Roosevelt, pausing at Polk to click my bike into a dock, thaw my hands then jump back on. There was a buffeting icy gale as I crossed Congress, but I dropped my head, stood on the pedals and persevered.
Docking at Roosevelt and Wabash, I couldn’t help but notice the Red Line station, welcoming and warm. I did my interview and after, heading back to the office, didn’t think twice about taking the L north and grabbing a Divvy at the Thompson Center, for the much shorter, much warmer return jaunt. Blame that free will I keep hearing about — it’s smart to limit your madness — though you could argue that it is just 100,000 years of survival instinct kicking in. And the next time I rode the Divvy — on Tuesday, when it was even colder — I was wearing mittens. They help a lot.