Kids won't ask, so you need to give them books

This column didn't quite turn out how I wanted it to. It started with the news of Bernie's Book Bank, which filtered down through the Sun-Times hierarchy, and ended up with me, I guess, because it's about books. I might have let it go, but I had the vignette from Jack London burning on my brain pan. And I meant for it to reach into books as objects. My gut tells me that writing is writing, and just as it can be read as easily in a book as on a parchment, so it can be read on a screen, and when you compare the dollars for print books versus pennies for electronic ones, of course people will gravitate toward ebooks. But look at the proliferation of orchestras, or live theater, of artisanal everything, flying in the face of the mass-produced, the virtual, the recorded. Maybe reading a book, with covers, is a tactile act. We'll see. Anyway, I got more reaction to this column, which appeared in the paper Wednesday, than I expected, so I decided to post it here too. 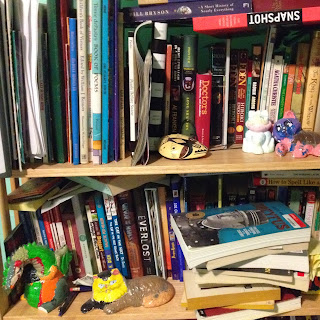 When Jack London was 10, a teacher loaned the future author of “The Call of the Wild” a book: “Tales of the Alhambra,” Washington Irving’s sketches of exotic Spain.
What she did not realize was that London lived in dire poverty; it was his only book. He read it over and over. But eventually it became time to give the book back.
“I was not a forward child,” London remembered years later. “Unlike Oliver Twist, I was incapable of asking for more. When I returned the ‘Alhambra’ to the teacher, I hoped she would lend me another book.”
But she didn’t.
“I cried all the way home on the three-mile tramp from the school to the ranch,” London wrote. “I waited and yearned for her to lend me another book.”
That’s how kids are. As much as they may need and want them, they do not typically say, “Please give me books.” Because they’re shy or because they don’t know who or how to ask. That’s where adults come in, adults like Brian Floriani, founder of Bernie’s Book Bank, a Lake Forest charity that this week will give away its 2 millionth book to needy Chicago-area children.
"We started four years ago," Floriani said. "The object was to create a revolutionary children's book-bank model."
Rather than giving one child one book once, Bernie's forms relationships with schools, visiting twice a year, year after year, giving kids bags of six books at a time.
"The kids are so excited, it's like it's Christmas when we show up," he said.
Floriani had been a golf pro when his father — the "Bernie" in Bernie's Book Bank — died suddenly, at age 58 in 2005.
"It shook me to my core and led me from the golf business toward a life of service," Floriani said.
His father had been a professor of reading at Lake Erie College in Ohio. Given that his death notice ends, "Because of Bernie's love for reading and books, the nicest memorial for him would be to read a book and make a donation to your local library," his son had specific ideas about how to channel his energies into service.
"The only way that transformation can happen is education," said Floriani, talking of his father's rise from humble beginnings in Pennsylvania coal mine country. "It wasn't because of who he knew, but because of what he knew."
One thing about a program like Bernie's — you couldn't do it with e-books. Electronic books have benefits - they're cheaper, eventually; you can search them; they're often lighter to carry. But they have significant drawbacks; besides the common ones - you need a device to read them, you lose the tactile experience of turning pages - you lose serendipity. Buy a book, you have it, can loan it, donate it, put it on a table. A bookcan pop up, years after you've forgotten it, and present itself to be read again.
Books still help kids learn, in part because books still grab readers in ways that online text doesn't. For all the emphasis on electronics, books have proven surprisingly resilient. This season, sales of e-books and e-readers are flat, and many kids can't afford technology. While computers are sometimes educational, sometimes just a distraction, books are still essential, though not in many households.
"Some kids come to school not knowing what books are," Floriani said. "Those kids don't have a chance."
Bernie's is celebrating giving its 2 millionth book on Thursday at the Academy for Global Citizenship, 4647 W. 47th. As good a thing as this is, I couldn't help but pause at the emphasis on number of books. When I asked Floriani about the quality of the books, he thought I meant the condition.
"If a book is overloved, it doesn't cut the mustard," he said. "Fifty percent of our books go out used, 50 percent new. You'd hardly be able to tell the difference."
No, no — what sort of books? Is Bernie's just a conduit between publishers with overstock? Good-hearted people with too many books and kids who take what they get?
He said they rate books by grade. "The leveling, that's done by us," he said, explaining age groups used by their staff of seven.
That will have to do. The goal is to get books to kids who have none - to get them great books, well, that's a star to reach for.
Floriani said Bernie's Book Bank is serving about 80,000 at-risk kids, of 300,000 he estimates in need ofbooks. He sees his organization as expanding, not only to surrounding counties, but to other cities.
"It's a monumental task, but I know it's going to happen," he said. "We want to be an American institution."