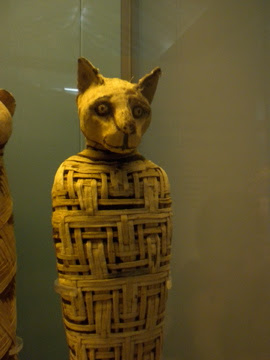 City Council is considering an ordinance that forbids animal shelters, including Chicago animal care and control, from killing unadopted pets. The bill pushed by Ald. Ed Burke, the father of ill-considered ordinances, which makes me wonder whether all aspects of it have been thought through. Will it, like the plastic bag ordinance, make the situation WORSE, by jamming shelters with animals they can't get rid of?  What will become of the tens of thousands of animals that come into custody of Chicago and are not adopted? It reminded me of the time I slid by the city animal control center to watch them euthanize animals.

Too bad you didn't stop by the Chicago Commission on Animal Care and Control and adopt that gray-and-white kitty I saw there the other day, because now Jennifer Harnisch has to kill it.
And killing kitties is hard. They can't simply be put inside the big rolling blue metal cages along with the older animals and wheeled into the gas chambers. Kittens are too young; they have too much hemoglobin in their blood. Harnisch has to grab each kitty, individually, and inject it with an overdose of sodium pentobarbital.
That isn't the tough part, however. Picking up kittens and injecting them is easy, physically—at that age they are so trusting, so affectionate. The tough part is thinking about it. Although, like anything repeated over and over again, it becomes routine.
"You get used to it," said Harnisch, 26, who said she is "bothered but not haunted" by her job at the Southwest Side center. "It's still very hard. I try to zone it out and not think of the actual act I'm doing. I don't think I could bring myself to do it if I knew."
That thought came back to me a lot. I don't think people know. Know, for instance, that the puppies they drop off, rather than being extra-adoptable (people love puppies) are usually killed the next day. They can't be adopted until they're fixed, they can't be fixed until they're 2 months old, and young ones can't be kept that long.
Even in the new facility, built in the mid-1980s, with cheery red-enameled brick and clean interiors, there is room for only 600 animals.
That sounds like a lot. But last year 28,314 dogs and cats, with a good number of rabbits, guinea pigs and the occasional strange beast (such as a Sonoran Sidewinder) were brought to Animal Control. Only 1,677 left through the front door -- adopted into homes. Another 1,318 were recovered by their anxious owners.
And the rest? Do the math. The majority -- 25,319 -- left through the back door, dead, in big fiberglass tubs filled with thick plastic liners. Pull back the plastic and take a look. They appear to be sleeping.
Putting them to death is relatively painless, supposedly, but still not pretty. The animals, in groups, are placed in one of three gas chambers -- stainless-steel cubes about 4-feet-square, with a sliding door of scratched and smudged glass.
A worker stands in the next room and pushes a button, watching through two chunky glass blocks built into the wall. The process takes 25 minutes. Carbon monoxide, pumped from tanks, fills the cubes.
The dogs yowl and scratch. They move even after they are dead. Eventually the chambers grow quiet, and the gas is evacuated. Then the bodies get dumped. The Department of Streets and Sanitation sends trucks to take them to the incinerator on Goose Island: 369,274 pounds of pets last year.
Last week, the city announced an increase in Animal Control staffing and adoption advertising so that fewer dogs and cats are destroyed. Actually eliminating the practice seems impossible right now.
To stroll through Animal Control is to pass from sweetness to horror and back. You have to steel your heart.
There, in the break room, is Popeye, an adorable Boston terrier that is one of three pet mascots at Animal Control. He's missing an eye -- he was hit by a car and his previous owners, confronting the prospect of medical expense, abandoned him.
There, in the room with the buttons that start the gas, is a guillotine with sheet-metal sides and a long, rusty-yet-sharp-looking blade that is driven down pneumatically. Not that they use it to put animals to death—it's only used in rabies cases, when state laws mandate that the brains be examined. The heads are sent to the Health Department.
This all makes grim reading, but the executive director of Animal Control, Gene Mueller, didn't try to hang a lot of fancy tinsel on the operation.
When I asked him how he rationalized his job, he said this:
"I'm a veterinarian. I'm involved with animals because I love animals. I have the terrible duty for society of disposing of their mistakes. We try to provide a humane method of euthanasia for these unfortunate animals.To end up here is far better than being run over by a car or tortured or some other horrible fate."
Hard to argue that. Hard to see what happens at Animal Control and then ignore it. Ignoring it is part of the problem. People have these romantic notions about animals. They don't want their pets neutered—oooh, too unnatural. They don't want them to be kept indoors. Oooh, too much like jail. They want them to experience motherhood.
"What everyone thinks is, 'I can find homes for these six puppies,' " Mueller said. "What they fail to understand are the implications. First, they've taken six homes from shelter animals, animals that already exist and will be destroyed because they don't have homes to go into. Second, you have no control over what is done with those puppies. You give them away, each could have six puppies. The problem increases geometrically."
—Originally published in the Chicago Sun-Times, Oct. 11, 1998
Posted by Neil Steinberg at 12:00 AM