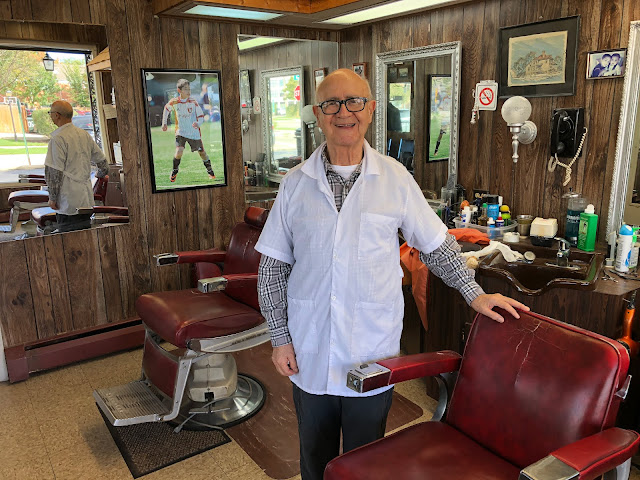 "Let me tell you a story," said Leonel Hincapie, the proprietor and staff of the Magic Scissors Barber Shop in Northbrook. He stopped cutting, and settled himself in a chair across from me.
This was unusual. Not just unusual, unprecedented.
Typically, our conversation begins with my entering the shop, several blocks from my home.
"Hello Leo," I'll say.
Sometimes there will be a customer, usually a man far older than myself. Sometimes not. Sometimes the barber will be in his chair, almost dozing.
"Do you feel like a bit of business, Leo?" I'll say. Or something like that. Then I take my place in the seat, and tell him how I want my hair cut: same as always. That's about it. I'll close my eyes. WFMT plays soft classical music. Occasionally, I will ruminatively pick up a clump of cut hair and blankly examine it. He will say something about the gray. I will chuckle and cast the clump away. The haircut takes a long time, a half hour at least. The warm lather on the back of my neck signals we're reaching the end. Afterward, I thank him.
"Thank you for your art," I'll say.
But this was something different. Leo was sitting across from me, in the customers' chairs. I paid close attention.
"I am from Colombia..." he began—I knew that. What I didn't know is that he grew up on a farm. A coffee farm. He left the farm, he said, and came to America, many years ago.
"Ten years ago, I went back," he continued. To his father's old farm.
"Did you meet anyone you knew?" I asked.
No. But the coffee trees were still there. And he carefully collected 20 beans from the trees located on his father's old farm.
Back in Northbrook, he planted the beans.
"Nineteen of those 20 beans died," he recalled.
But one lived. 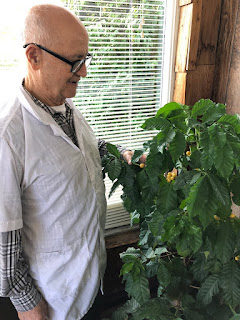 He showed off a tree in the corner of the shop, lush and dark green, maybe five feet high.
That was it. I got up, still wearing the barber's drape, admired the tree, and congratulated him on it. Then I sat back down. He continued with my haircut.
Not much of a story, I suppose, as far as stories go. Not heavy on plot. But I have thought about it since then, maybe because it is so simple, so enigmatic.
And it does have a point, and the point is this:
The tree lived. The 19 others didn't. But this one did. Not only that, but it was a coffee tree in the corner of a sleepy barber shop in Northbrook. How many times over the years have I sat next to that tree, thumbing through Chicago magazine, waiting my turn? Never realizing that the plant next to me was a precious memento of a South American boyhood, long ago.
Now I know. And so do you.