Storm flashback, 1999: "A heart finds warmth in a frigid city" 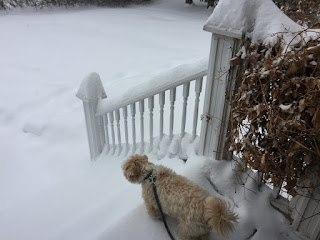 Admit it. You anticipated the arrival of the blizzard on Sunday with a certain thrill. Setting in supplies, making preparations, half anxious, half eager. I took in the flag and the umbrella, covered the grill and gassed up the snow blower, while Edie went to Sunset for milk and bread and grapefruit. I kept track of the weather situation as if I were in charge of it.

Both boys' flights back East were cancelled, and while a trip to O'Hare is in the cards for Monday afternoon, that'll be it. I don't have a column in the paper today—since I was technically off for the Thanksgiving holiday Thursday, yet still wrote a column for Friday's paper, my boss told me not to write one for today. A break I gratefully accepted, though not without being a little nostalgic for the days when duty would send me downtown in such a storm, exploring the city, such as this column, from 1999, relates:

Of all the memories I'll carry away from this week's storm—struggling across IBM Plaza in Saturday's arctic gale, one hand trying to pull my parka hood down over my face, the other clinging to one of those ropes, or walking in the middle of a deserted downtown street late that night, not a car around, just hunched figures loping off in the distance—the one I'll cherish most is an unexpected greeting from a guy shoveling on Oakdale Avenue.
It was a struggle just to get there, to get home after work Monday. No cabs on Wabash. Nothing on Michigan. I reluctantly joined the throng at the bus stop across from the Wrigley Building, only to have three jam-packed buses blow by. I then wandered north on Michigan, looking for cabs, contemplating trekking over to the L station, several painful blocks west.
Then the cavalry arrived. A bunch of empty CTA buses roared down the street, lumbering to the rescue. I joined the two dozen people shivering at the bus stop and struggled aboard.
The bus illustrated how people shed their reserve in a crisis (well, semi-crisis). The windows were completely frosted over—you couldn't see. The driver wouldn't call out the stops, so nobody knew where we were. An enterprising young woman in almond-sized eyeglasses tapped the lady in front of her and told her to pass up the request to the driver that he announce the stops. I was positioned so I could watch the message move several people up the aisle, then stall out at a Julia Roberts-like lady who obviously couldn't bring herself to tap the hulking bald man in front of her and speak to him.
A well-dressed executive-type next to me, sitting by the window, instituted Plan B, the careful creation, with his gloved thumb, of a small porthole in the frost to peer through, trying to determine where the bus might be. He called out the stops, when he could.
The trip only took twice as long as usual, and was marked by bonhomie unusual for public transportation. People looked at each other, smiled, spoke. A woman in a full-length fur coat and matching headband remarked to me that this was turning into quite an adventure, and I responded that my wife had a coat exactly like hers, and thus can't understand what all this "cold" talk is about. (Maybe it's nerves, but I've noticed that if a strange woman speaks to me, on whatever subject, my answer invariably includes a reference to my wife. Some sort of self-preservation instinct, the way a possum will play dead if threatened).
I left the bus, crossed Sheridan Road, and passed a guy digging his car out from the 3-foot-tall berm of snow kicked up by the city plow. He surprised me by greeting me. I stopped, squinting through my scarves, to see if I knew him. I didn't. I said hello and waited. Maybe he wanted me to help him shovel.
"Do you think you'll get your car out?" I said, as a prompt. He said he did. There was a pause. "Well, make sure you mark the place with a chair," I said. "People seem to be doing that. Maybe the space will be there when you get back." He went back to digging. I quickstepped up the street toward home, marveling at this bit of small-town small chat.
What is it about extreme weather that brings out friendliness in people? You'd think it would be the other way around. That beautiful summer days, with soft zephyr winds puffing off the lake, would inspire people to suddenly start talking on the bus and greeting strangers.
But they don't. Warm weather is when tempers flare and fistfights break out at the beach. And when the city is blanketed with record amounts of snow, suddenly we're leaping to join others pushing at the back of cars as their wheels spin.
It's as if there is some human need for warmth, and if the weather doesn't provide it, we have to provide it ourselves. At least it's pretty to think so.