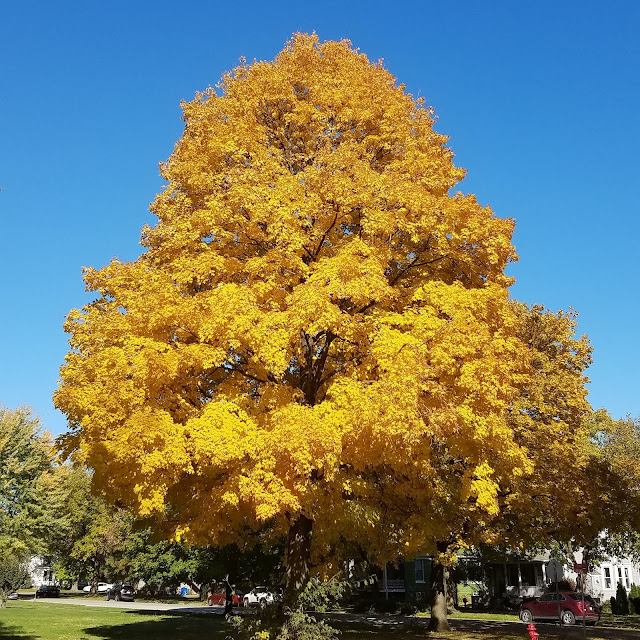 Today's snapshot, an enormous pyramid of autumnal glory, comes from Tom Peters, who took it last week on Second Street in Momence.
Thank you, Tom.
There is comfort in the turning of leaves in the fall. 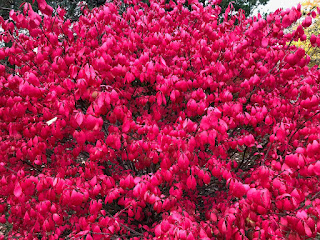 For their beauty, of course, the amazing yellows and reds, oranges and, in the case of the burning bush in the back of my house, a bold magenta.
But also in the fact that they take place at all. That life whirs through this yearly cycle of birth and death, flourishing and shutting down. Something regular, predictable, dependable.
Thank you nature.
If only our politics would be as orderly or as predictable. The sprouting of liberal freedoms, slow but blooming progress, then the chill November of extremism, and following winter of nationalism, despotism, as certain populations become uncomfortable with the idea of everyone competing on a level playing field as equals, and try to push down the people who are scrabbling up.
We don't know, at what point in the cycle we are. Is this the end of February, with bleakness all around, but spring lurking, mischievously around the corner? Or is this the first cold breezes of late October, with months and months of icy suffering yet to come?
Who can tell? Nobody.
The changing of the leaves reveals a subtle strategy we might bear in mind. In temperate climates, trees tend to keep their leaves, replacing them gradually in three- to five-year cycles. And why not? The sun is out, it's dinner time. But in our colder regions, when long cold, sunless winters make production of nutrients of scant benefit, trees don't even try to make food, preferring to withdraw useful chemicals from their leaves and then shake them off after the first few frosts, resolving to try again in the spring, when conditions are better.
Smart. Nature tells us to work hard when condition are favorable, but if there is a barren stretch ahead, to go fallow, save our strength, and reserve out energies for when they can do the most good.
This is one of those times. Unlike the unavoidable arrival of winter, we all can make a tiny difference, harnessing our warmth against the gathering totalitarian bleakness. Show your true colors. Vote on Tuesday, for America and against fear.