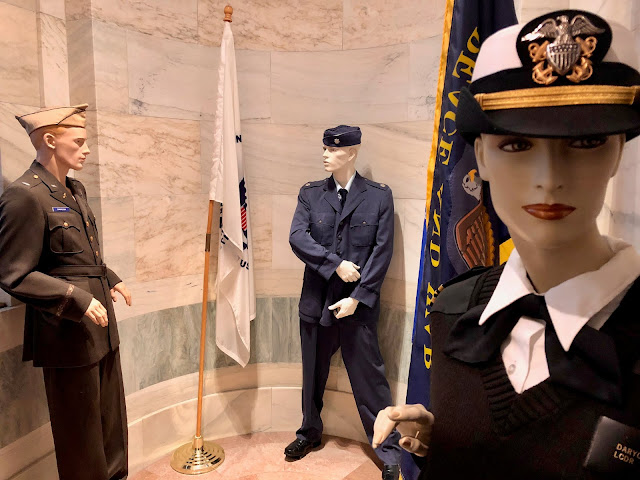 I could have written about the centennial of Armistice Day without actually visiting the Elks Memorial at Diversey and Lakeview. But I knew it was a singular space, rococo, enormous and empty, from when we lived three blocks away at Pine Grove and Oakdale. I wanted to make sure it was still open, and still as unpopulated as I remember.
Yup. I showed up an hour before they closed, and the log said I was the second visitor. The docent told me they get 500 visitors a year. An Elks official later changed that to 500 a month, either way, that still constitutes a very few people for a dome almost as large as the Jefferson Memorial. I'd bet not 1 out of 100 Chicagoans knows it's there, and not one in a thousand has gone.
I took photos for my column on the effects of the war on Chicago, but also couldn't help but snap this little tableau, set up in a side chamber that featured cases of military memorabilia from America's 20th century wars. The memorial was completed in 1926, and dedicated to the 70,000 Elks who served in World War I and the thousand who died in the war. It was subsequently re-dedicated to include veterans from World War II, in 1946, and later to vets from our more recent wars.
To be honest, the general emptiness, while no doubt a source of unease for the Elks, is fitting. The essential truth of those who die in war is they are gone and don't come back, and what better way than an ornate hall empty of people. Perhaps that is what inspired someone to set up this ill-advised tableau of mannequins, which only made things worse.
We give a lot of chin music to the sacrifice of our soldiers and sailors, air force and marines. But that supposed respect doesn't extend to, oh, visiting a gorgeous shrine set up in their memory. Of course a 100 years is a long time. Their parents, their brothers and sisters, their wives, are gone. The only people who could mourn now—really, the ones most affected, whose loss is greatest—are the children never born to the soldiers who never come back. With the right eyes, they crowd the empty hall of the Elks Memorial, sealed off from the living world they never were permitted to enjoy. 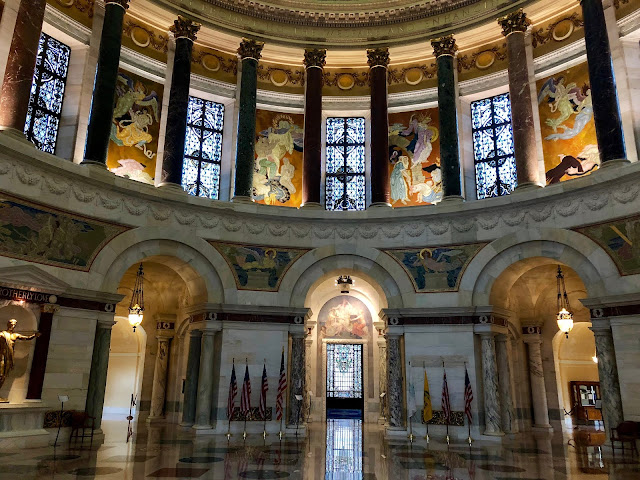