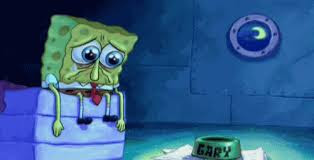 Sad to hear that SpongeBob creator Stephen Hillenburg died this week, at age 57.
We boys loved SpongeBob. Loved him. His buddy Patrick, the goofy starfish who was even dimmer than SpongeBob, if such a thing were possible. The power-mad Plankton, desperate to steal the secret recipe for Crabby Patties and spirit it back to his Chum Bucket. The whining Squidward with his jazz passion—there was a jazz critic at the paper who reminded me of Squidward so much, from the nasal whine to the bald dome, that I almost pointed out the similarity to him.
My boys and I would sing along with the rollicking theme song. "If nautical nonsense be something you wish—SpongeBob SquarePants!—Then drop on the deck and flop like a fish!" We went to the full-length movie.
There was inanity for the kiddies. And a grown-up wink often tucked behind all the innocent silliness. I was even able to use a SpongeBob moment to try to make a point about charges of racism, which I think are thrown around much too casually. This column is 16 years old, and might grate a bit with our current pieties: the president wasn't blowing kisses at Nazis back then, so perhaps we enjoyed the luxury of being able to make fine distinctions.

In a rare moment of perfect timing, I wandered downstairs this morning, searching for my shoes, just as the TV was showing the deepest, most profound scene in the entire oeuvre of "SpongeBob SquarePants."
SpongeBob and his friend Patrick Starfish are in the midst of a heated argument that deteriorates into a rapid-fire exchange of insults.
"You paint your fingernails!" accuses Patrick.
"You don't even have fingers!" retorts SpongeBob.
Patrick, clutches his head: "I can't believe I'm hearing this!"
"How can you hear?" says SpongeBob. "You don't have ears!"
"Holes!" the starfish yells, pointing at the sponge.
"Conehead!" he answers.
"Yellow!"
"Pink!"
Now Patrick, who is indeed pink, screaming "Yellow" at SpongeBob, who is in fact yellow, strikes me as the perfect embodiment of what many people choose to interpret as racism or ethnic hate, when it is actually just the expression of a convenient slur.
It was odd, almost uncanny, to see the episode again this morning, because just the other day I was describing it to a colleague, who had challenged me over my plans to return to a local legend's radio show.
"How," he said, amazed and indignant. "HOW can you go on Steve Dahl's show after what he said about you?"
What Dahl said is that I'm a Jew. The week before, I had spent a few hours on Dahl's show plugging my new book. We ended up having a good time, dancing on the corpse of Bob Greene, with such joy and gusto that Dahl asked if I'd come back and do it again next week. I said sure, but then surprised him by adding that I'd return if he paid me something. Fun is a job if you have to do it regularly, or as the great James Thurber once wrote: "Even the most pleasurable of imaginable occupations--that of batting baseballs through the windows of the RCA Building--would pall a little as the days wore on."
Dahl seemed to understand. "No problem," he said. "We'll take care of you."
The next week, when I didn't hear from him, I shrugged and figured he let it drop. People typically let things drop. No biggie.
The next Monday, a friend took me aside. Did I hear what Dahl said about you? He asked, with all intent and seriousness, as if someone had died. A caller wondered why you didn't come back, as you promised, and Dahl ripped you for wanting money and called you a Jew.
Steve Dahl beating up on somebody who isn't there is typical—of him, me and everybody I've ever met in my entire life. What is rarer is my colleague, and I'm not naming him because he is actually a shy guy, despite his profession, and possessed of the quaint notion that his work should be filled up with other people actually making news. He confronted me, honestly shocked, sincerely curious. This was the oldest, vilest slur against Jews: money-grubbing. How could I associate with anyone who expressed it?
The worrisome thing, for me, is that it had bothered me not at all. I assume people are anti-Semites. Frankly, I gave Steve credit for expressing his slur on the air, rather than whispering it to his buddies.
Doesn't this condone it, my colleague demanded, not buying my argument? Doesn't this make the slander more acceptable?
I told him the SpongeBob story. People get mad, they reach for whatever they think will hurt somebody else. If they're yellow, they call them yellow. If they're pink, they call them pink. There's an editor at the paper whom I've looked at over the years, narrowed my eyes, and thought, unkindly: "You big, Semitic, flame-haired S.O.B." That isn't being bigoted. I'm big, I'm Semitic, I'm—OK, not flame-haired, though I wish I were—but certainly an S.O.B. What it is, and what Steve's crack, and most such cracks are, is collecting every quality you can think of relating to the person you're mad at and spewing them back in a bad light. If I were angry at Reese Witherspoon, I might blurt out, "You button-nosed saccharine little megabucks movie fodder!" That doesn't make these bad qualities.
Frankly, and this might be a false distinction, I differentiate between the Dahls of the world, airing the biases we all share and suppress, trying to be funny, and, say, the Pat Buchanans, who are pretending they're rational when, in fact, they're hatemongers.
A lot of entertainment involves insulting someone; you need villains to hijack the planes, dupes to slip on the banana peels. We've purged culture of the traditional butts of villainy and humor, and so are stuck with those unidentifiable Eurotrash terrorists in black sweat shirts and clowns culled from the traditional power elite (Austin Powers is British; imagine if he were Jewish, or black).
There is so much actual hate in the world (the Palestinian, send-junior-to-the-mall-to-blow-himself-and-a-few-Jews-up hate), I just can't see getting worked up over someone cracking a joke, or trying to. I find the insults flying between SpongeBob and Patrick hysterical. Then again, I am not a sponge or a starfish. We have come to that.