A whole new spin on being at death's door. 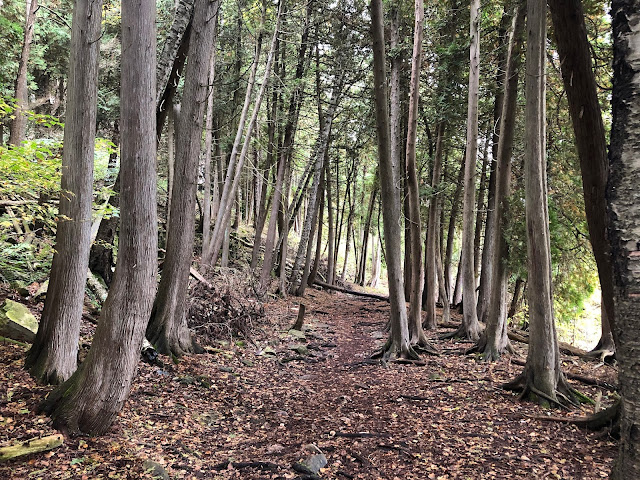 "What have we been doing all these years?" my wife asked, incredulously, as we worked our way under the towering limestone bluffs along the Eagle Trail in Peninsula State Park.
I knew what she meant. She wasn't asking for a point-by-point recapitulation of our 38-year relationship, but wondering how we, who like the outdoors, like nature, like to hike, had nevertheless managed to miss Door County until this week.
My fault, surely. First, because most things are. And second, I do recall her mentioning a desire to go to Door County, one that I shrugged off because a) I had worked my first internship in Green Bay Wisconsin, from January to March, 1981, which did not leave me with happy memories of the place b) a few years after that we had gone to the Horicon Marsh in Fon du Lac, which I assumed was the same place, or near enough, but is actually 150 miles away and c) I tend to shrug off most things that aren't staying right where I always am, doing what I'm always doing.

Well, we're here now, at last, making up for lost time. We got a $38 annual Wisconsin State Parks pass, which might seem imprudent given it is mid-October, but hit the state parks four days in a row, so came out the better for it. Rain was predicted all week, but it politely retreated into the wings during our hikes, though once starting to sprinkle as we approached the van after a two-hour hike, just to show us what we were missing. I'm not going to write a travelogue—not while we're in the midst. But we're staying in Ephraim, a pleasant if touristy spot—like a wee Wisconsin imitation of Bar Harbor—but with plenty of authentic fun, like the fish boil at the Old Post Office. We drove up to Sister Bay yesterday for lunch at the goats-on-the-roof place, Al Johnson's (the goats, alas, had the day off because of the aforementioned rain. Union rules). Excellent coffee, excellent herring, and Swedish pancakes with lingonberries that I assume were excellent. As I don't believe I've ever eaten them before, I don't really have a point of comparison. I finished them all.
Being me, I started wondering where the "Door" in "Door County" comes from. I assumed it had to be from some person—Frederick Door, an early pioneer perhaps—or because the place is the entryway somewhere. It actually comes, quite spectacularly, from Porte des Morts, "the Door of Death," a name given to a region offshore where Lake Michigan meets the waters of Green Bay that many Native-Americans supposedly lost their lives traversing. I don't want to say it was worth coming just to find that out—it was the hiking, the hanging-out-with-my-wife, and the not-being-at-home-working parts that made it worth coming. But I was glad to learn it nonetheless.