The grasshopper is no burden, yet. 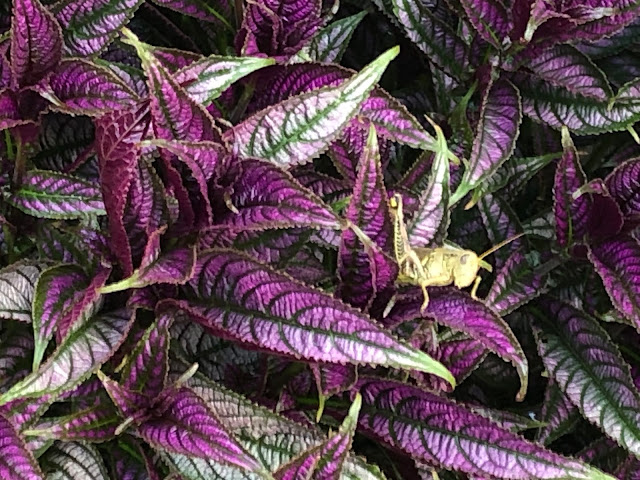 The summer is over, gone, the cold gathering, settling in. Leaves are already dead, falling, and yet I haven't mentioned one of the most notable events of the whole season, now past. I saw this grasshopper, hidden among the leaves of my Persian Spear. I don't remember ever seeing a grasshopper in years and years. Crickets, yes, cicadas, God knows. But this fellow, straight out of Aesop. I had just enough time to frame a photo and he was gone.
I believe it is a differential grasshopper (Melanoplus differentialis) based on the distinctive "inverted chevrons along the hind femur." But there are 11,000 varieties of grasshoppers, at least, so I am open to the idea that I might be mistaken.
Had I been thinking quickly, I might have reached out and crushed it.  Grasshoppers are notorious pests, going back to the Bible. "The grasshopper shall be a burden." (Not to confuse them with locusts, which are similar, physically, but have even worst culinary habits. Think of locusts as grasshoppers gone bad).
But no, upon reflection, I probably would not have done that, even had it crossed my mind. Too beautiful. Besides, they gobble ragweed too.
That quote from the Bible is deceptive, as quoting out of context so often is. That line, in the Book of Ecclesiastes, part of a memorable passage about advancing age. Here is the entire thing, taken from the New King James version, 12:1, with a few, ahem, alterations of my own, done to enhance comprehension

Remember now your Creator in the days of your youth,
Before the difficult days come,
And the years draw near when you say,
“I have no pleasure in them.”
While the sun and the light,
The moon and the stars,
Are not darkened,
And the clouds do not return after the rain;
In the day when the keepers of the house tremble,
And the strong men bow down;
When the grain grinders cease because they are few,
And those that look through the windows grow dim;
When the doors are shut in the streets,
And the sound of work is low;
When one startles at the cry of a bird,
And all the daughters of music are brought low.
Also they are afraid of heights,
And of terrors in the way;
When the almond tree blossoms,
The grasshopper is a burden,
And desire fails.
For man goes to his eternal home,
And the mourners go about the streets.

Quite grim, I know, particularly when the faith in God isn't on the table as balm and narcotic. "When the almond tree blossoms" is an allusion to white hair. And the grasshopper reference isn't because of their crop-devouring, or incessant chirping. It's their lightness. Older people are plagued by grasshoppers means eventually even your light burdens are difficult.
Hmm, how do I pull out of this one? Maybe by quoting scripture of a different sort. When Warren Zevon was dying, he said a variety of very smart things. He talked up poetry, carrying a copy of Rilke's "Duino Elegies" with him. He kept working. "Work is the most effective drug there can possibly be," he said. True dat. And when David Letterman asked him what he had learned from the cancer that would kill him at age 56, he replied, 'How much you're supposed to enjoy every sandwich." Do that, or try to.