‘Everything went wrong’ — the Great Chicago Fire at 150 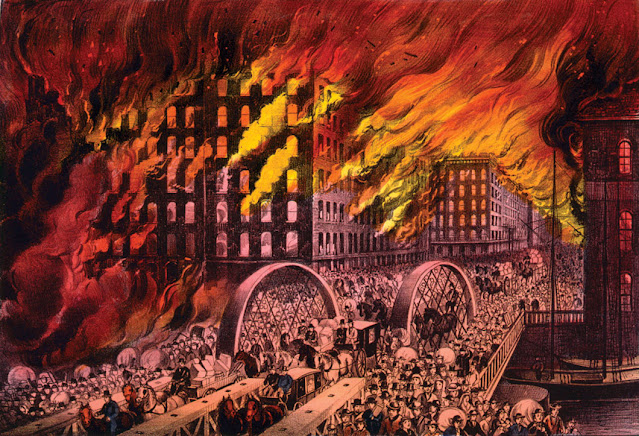 I volunteered for this one. Working on a book about Chicago history, of course I noticed the 150th anniversary of the Great Chicago Fire was looming, and poked my bosses, months ago. Not something a newspaper wants to forget. My approach was dictated by a single fascinating—to me anyway—fact, the one that begins the story. From there, the structure of passing the narrative from witness to witness presented itself. I knew that my piece would appear after the Tribune had been hammering on the fire for weeks, and hoped to provide something fresh and different.

The summer of 1871 was terrible for Mary Todd Lincoln. Her adored younger son, Tad, 18, died in July, a month when no rain fell in Chicago, the city where the slain president’s immediate family moved after leaving the White House in 1865. Mrs. Lincoln, a woman heavily veiled in black who “suffered periods of mild insanity,” lived with her only surviving son, Robert, a lawyer, on South Wabash Avenue. By autumn, she sank even deeper into anguish.
“As grievous as other bereavements have been, not one great sorrow ever approached the agony of this,” she wrote to a friend on Oct. 4.
And then the city burned down around her.
One hundred and fifty years after the Great Chicago Fire, much about the epochal event that recast our city and its people is unfamiliar to current residents. Not one person in a hundred knows Abraham Lincoln’s widow lived here and endured the calamity, while the one thing many believe they do know about the fire, that it was started by Mrs. O’Leary’s cow kicking over a lantern, is a baseless ethnic slur, a scrap of mocking calumny preserved in amber like an insect’s leg, surviving all efforts to dislodge it. Even though universally agreed to be untrue, or at least unsupported by any evidence, the lie endures.
The most common causes of fires, the Chicago Fire Department had reported the previous March, were not cows or lanterns, but defective chimneys, carelessness with flame, and arson. There had been an average of four fires a day in Chicago the first week of October, started by tossed cigars, mischievous boys and oily rags bursting into flame.
This was a city heated by coal, lit by gaslight, strewn with hay. The sidewalks and even some fire hydrants were wooden. Blistered by drought, “the dust was almost intolerable, the ground became parched,” wrote Chicago Theological Seminary student William Gallagher. “A furious wind from the southwest had been blowing steadily all day Sunday.”
Whatever the cause, the fire certainly started in the barn behind the home of Patrick and Catherine O’Leary and their five children at what was then 137 DeKoven Street, on the city’s near Southwest Side. The hardworking O’Learys already had gone to bed. And they didn’t own a cow; they owned five, plus a horse and a calf. A drayman named Daniel Sullivan, out enjoying the evening, saw fire through the cracks between the boards of the O’Leary barn.
“Fire! Fire! Fire!” he shouted.
Sullivan went in the barn and untied the cows, thinking they would save themselves. They didn’t. He dragged the calf outside, badly singed.
Joseph Edgar Chamberlin, a 20-year-old reporter on the Chicago Evening Post, arrived almost immediately, about 9:30 p.m., Sunday, Oct. 8, 1871, to find himself in a part of town he had never visited before. 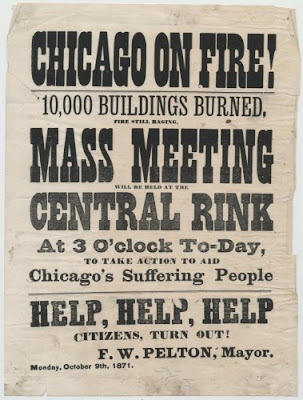 “I was at the scene in a few minutes,” he later recalled. “The land was thickly studded with one-story frame dwellings, cow stables, pigsties, corncribs, sheds innumerable; every wretched building within four feet of its neighbor, and everything of wood — not a brick or a stone in the whole area. The fire was under full headway in this combustible mass before the engines arrived, and what could be done?”
The fire engines — steam pumpers, drawn by teams of brawny horses — were delayed because the alarm was slow being turned in. A pharmacist refused the alarm box key to a resident who’d seen the fire. Mathias Shafer, the night watchman in the Cook County Courthouse tower, saw the orange glow but thought it was light from the gas works. When he did send an alarm, he sent the firemen to an address a mile and a half from the fire.
Later asked to describe what went wrong, one fireman would reply: “Everything went wrong.”
To continue reading, click here.