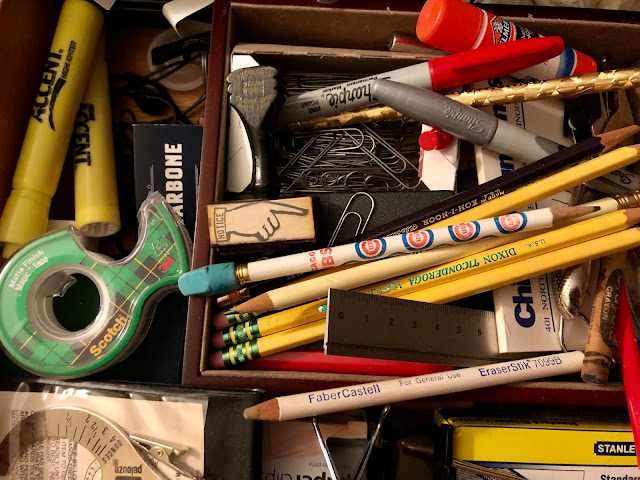 I called my old friends at Atlas Stationers on Lake Street Wednesday to order my 2022 Brownline Daily Planner. Which led me to this, and I thought I'd share it with you. First, for the word jazz over office supplies. And second, well, I gotta say, I'm proud to have once called the National Weather Service to ask if the clouds are lovelier of late. It's from when the column ran nearly a thousand words and filled the page, so some patience might be required. I've left in the original headings.

JetBlue charging $7 for a pillow and a blanket reminds me of a business tip I've meant to give to struggling upscale restaurants for a while now. Two words:
The napkin.
Hear me out. Restaurants already plump their bottom line by gulling diners into splurging on luxury water instead of plain old tap. Like there's a difference. Why then should patrons settle for boring white linen napkins, when they could chose from a "Napkin Menu" offering rough silk, antique lace or fine Egyptian cotton? Think of the publicity value—far outstripping the $100 Kobi beef hamburgers that clever chefs have long used to gain a headline or two. If napkins are too over-the-top, think about the revenue stream possibilities of salt. Why sprinkle your $90 Tempura of Spot Prawn with Braised Kombu with the same sodium chloride the Morton Salt Girl has been flinging around for a century when you could savor imported hand-pestled French sea salt for an extra $9 and get to keep the little crystal shaker as a souvenir? I'm surprised nobody has thought of it before.

A CLOUDY DAY CAN BE A GOOD THING

It is a mantra of mine that the world does not change; rather, we change, and then blame the world. Life does not start as an exciting, dynamic, possibility-laden enterprise—coincidentally when we are young —and then suddenly shift, deteriorating into a grim, dull, unappealing, entropic mess about the time we grow old.
Thus I viewed with suspicion—at first—my growing conviction over the past few months that the clouds are lovelier and more numerous than usual this summer. I dismissed it as a trick of memory, a passion, an amour fou, the symptom of some overwrought emotional state.
And yet. Day after day, I'd look up, and stop. Enormous Maxfield Parrish billows piled up in a corner of the sky, churning, lit pink and yellow and gold by the setting sun. Sheets of wispy stratus clouds, whirls, fantastic displays that lacked only cherubs with harps.
I placed a call. Are the clouds lovelier this year?
"I noticed that," said Frank Wachowski, a National Weather Service meteorologist who has been closely watching the Chicago weather for the past 62 years -- since he was eight. "In the afternoons, lots of build-ups."
More than usual?
"We really don't keep records on clouds," he continued. "But there's been a lot of cumulus clouds, a lot of thunderstorms. Some tops of thunderheads go as high as 70,000 feet. In the last 60 days or so, lots of what we call cabbage-type clouds: cumulus-nimbus, and with the jet stream, lots of cirrus clouds—the middle-type, 12,000 to 15,000 feet. I'd say the last two months have been exceptionally different than most summers."
Well, that's a relief.

PENCIL JOTTINGS
"I have known the inexorable sadness of pencils," wrote poet Theodore Roethke. "Neat in their boxes, dolor of pad and paper-weight. All the misery of manilla folders and mucilage."
I don't know about that. Myself, I've known the joy of pencils—tumbling out of the box with a clatter, fresh recruits, interchangeable soldiers in their identical orangish-yellow uniforms, eager to serve.
But then, I'm a sucker for office supplies. This autumn—as every autumn—I'll feel a pang at not being able to go to Woolworth's to stock up on protractors and rulers, pencils and scissors, tape and ring binders.
Pencils have an aesthetic beauty and an technical purity—engineering historian Henry Petroski wrote an intriguing book about their development, The Pencil. There is a reason Claes Oldenburg made paper clips and wheel erasers into giant sculptures—they're pure forms, and beautiful, or else throwbacks to an earlier time. What is more nostalgic than a rubber stamp? Novelist Nicholson Baker referred to the "black, weighted Duesenberg" of an old tape dispenser as "grandiose and Biedermeier and tragically defunct." Mmmm....
Perhaps it can't be explained—you either get it or you don't. I'm looking at a round metal can of Premium Best-Test White Rubber Paper Cement. It sits, red and white, on my roll-top desk—too beautiful to hide in a drawer, a delight to unscrew its round metal cap with "BRUSH IN CAN" embossed upon it, to remove the aforementioned black brush, enrobed in a viscous cocoon of milky glue, dripping slowly, languid as honey.
And while I patronize the Office Depots and OfficeMaxs that crowd the suburban moonscape, there is a special place in my heart for Atlas Stationers, in the Loop, in a small iron-columned storefront right under the L at 227 W. Lake Street. Business sends me there every week or two, to purchase copy paper or grab a bubble envelope ("Cushioned/Self-Sealing" it announces, traits we all can aspire to) or gaze longingly at the green-covered ledger books and blue-lined accounting books and wonder who in God's name still uses them.
You worry about a place like Atlas Stationers. They've been there since 1939, but how much longer can they survive? How much longer can they peddle Chisel Point Staples and Dixon Ticonderoga pencils, competing against the bargain behemoths? In that struggle, Atlas is holding its 21st annual sidewalk sale today. "Discounts UP to 90%" cries the flier they tucked into the bag with my four Uniball Gel Impact RT pens, two black, two blue. "Bigger and Better Than Ever! Come Often! Selection Changes!"
That sounds exciting, doesn't it?
—Originally published in the Sun-Times, Aug. 15, 2008
Posted by Neil Steinberg at 12:00 AM