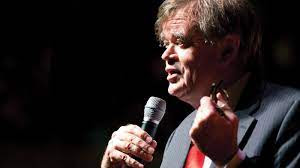 Garrison Keillor is one of those figures like Al Franken, whose careers sank after running headfirst into the Me Too movement. I'll leave it to others to decide if that was fair, or if they were swept up in a furor, like Antoine Lavoisier, the scientist beheaded in the French Revolution. Once the guillotine is set up, it demands new necks to feed upon.
I've been thinking about seeking Keillor out, maybe trying to interview him. But Keillor was a tough interview before this trouble happened. He hated the press before, and I doubt being publicly cashiered made him any fonder. I remember, after this conversation, telling someone that talking to him was like trying to interview an oak.
He's going to be performing "A Prairie Home Holiday" at the Rialto Square Theatre Dec. 11. I don't think I'll go—I've seen him several times, and it's in Joliet. But if you never have, you might consider it. He's the greatest American humorist since Mark Twain, and he won't be coming around forever.

Mark Twain made a lot of money. Both from his own best-sellers, like "Huckleberry Finn," and from the work of others - he owned a publishing house - particularly the memoirs of Ulysses S. Grant.
But he also lost a lot of money. Trying to repeat the Grant success, Twain published the autobiographies of lesser Civil War generals who, it turned out, the American public no longer cared much about.
And Twain had a genius for bad investment. He bought many worthless patents. Several times in his life he was forced to hit the road to earn money, particularly after the economic panic of 1893, which left Twain bankrupt at 60, forced to travel the world giving speeches to pay off his creditors.
I think of Twain pulling into Chicago or Berlin and imagine a local gazing at the paper, musing whether to go see the great man, whenever his lone rival over the past century, Garrison Keillor, comes to town, as he will in a couple weeks, and I have to decide if I should go see him again. Usually I do.
Not that Keillor is financially ruined, I hasten to add. He tours the country with his radio show, "A Prairie Home Companion," because ... well, I had no idea why, so I asked him, before we fell to talking poetry, which you might have read about in my last column. Why not always broadcast from St. Paul?
"Well, you get to see a better cross-section of people who listen to the show," Keillor said. "That's something a person needs. The longer you're in this business, the more you have to press yourself to get out and be out around people. I like to hang out after the show and talk to people; I want to check out who they are."
His audiences turn out to be younger than you might expect.
"A lot of people in their 20s now, and 30s, who more or less were forced against their will to listen as small children - they've made this transition, they come to enjoy something that as young people they thought they loathed," he said. "I'm interested both in the loathing and what they like about it now. So they offer a lot of information, and I want to keep in touch."
I imagine they like the variety of the show—the songs and humorous sketches, and the highlight, Keillor's snapshot of his fictional hometown, Lake Wobegon, a short story he says is shaped in part by those listening to it.
"When I sit down to write the show, I'm not writing it for myself. I don't want to," he said. "I'm writing for an audience. It just helps a lot to have some faces in your mind."
Keillor doesn't read the story, nor does he entirely make it up on the air, but rather a blend, part recalling what he wrote earlier, part extemporizing as he goes along.
"I'm a writer. The way I think is by putting words down," he said. "I like to have some outline, some story. That's how I do my thinking, looking at a long legal pad, with a pen, making marks. Then I toss it out. Once you write it down, then you don't need it anymore. You extemporize from what you remember of it. You don't make any attempt to memorize. Sometimes you turn it all around in the act of performing."
What happens then?
"When you tell a story, the audience will tell you where to go," he said. "They give powerful directions, and that's what you want to rely on. It just looks odd, I think for a man to stand up in front of an audience and read off a script."
Does he ever forget what comes next? On live radio? What then?
"It happens often," he said. "And you just have to talk in circles until you find a trail. You're in the woods and sort of crashing around through the underbrush. Eventually you find your way out of it."
Keillor, 70, has in the past publicly speculated about retiring, but no longer.
"It's always up in the air," he said. "We have this season pretty much all blocked out," and 2014 "is starting to get sketched in."
With the election so close, we talked about politics—while the show isn't overtly partisan, it often contains a strong message.
"I would always rather confuse people than have a label stuck to me," he said. "But I'm an old Minnesota Democrat, no secret about that. I've been involved in Democratic politics up in Minnesota, especially this fall, though my view has broadened with time. The party line doesn't interest me so much as politics is the best way there is to meet people and get to know who they are. Deep down, politics is about civility and about friendship, about the bonds between people. I think that I'm aligned with people who have acquired in their youth a powerful sense of empathy for the outcast, the stranger, the victim, the abused and the unlucky, and so we believe that we allied against the protectors of privilege. To me there's only one side to be on."
—Originally published in the Sun-Times, October 26, 2012