Is a bicycle a "device"? 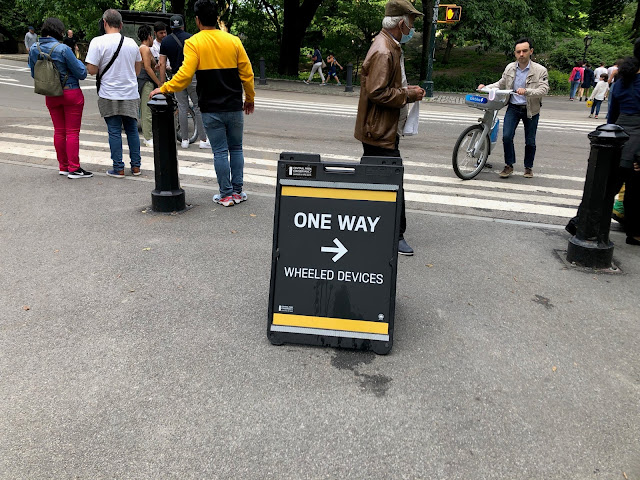 The wrong word grates.
Whoever in the Central Park Conservancy decided that bicycles, scooters, skateboards, etc., are "WHEELED DEVICES" should do a face plant. Devices? This has to be a bleed-over from the omni-presence of screens. "Electronic devices." Maybe some kid who's been playing too many games was in charge of the signs.
I was curious whether these signs, in media savvy Manhattan, had sparked previous complaint. I can't be the first one to notice, can I?
The signs showed up three years ago, and while they were criticized at the time, it seems to be on aesthetic grounds, for being ugly or useless, and not for using the wrong word.
The usage "wheeled devices" does not seem localized to the East Coast. Here is the  California State University at San Bernardino's "Wheeled Devices Policy."
Which makes me wonder. Could I, like so many who point out supposed mistakes, be myself wrong? If I had to define "device" without looking it up, I'd say a mechanism to achieve a purpose, a contraption designed to do something, a goal-oriented machine. A certain complication is implied: a can opener is a device. An axe is not (I would call that "an implement.") Add "electronic" and electronic devices are any small handheld piece of equipment. A cell phone. An iPad.
Let's check the experts. My Oxford English Dictionary focuses on devices as figurative invention: "1. The action of devising, contriving, or planning; the faculty of devising," taking its time to even allude to physical objects:. "6. Something devised or contrived for bringing about some end or result" but even then, its "an arrangement, plan, scheme, project, contrivance."
But language is plastic. Perhaps a newer definition would include Central Park's mountain bikes and rickshaws.
The first half dozen definitions on the online Merriam Webster focuses on schemes and techniques, with only definition f giving us: "a piece of equipment or a mechanism designed to serve a special purpose or perform a special function" giving the example of smartphones and tape recorders.
So is a bicycle a device? Legally, yes, judging from explanations such as this, from the California state vehicle code: "A bicycle is a device upon which a person may ride, propelled exclusively by human power..."
And language is plastic: bicycles are devices if people say they are. But other people are allowed to push against certain usages, and calling a skateboard a device is, to me, an affected, out-of-place legalism, like calling a criminal a "perpetrator." "Vehicle" is a fine word, from the Latin vehiculum, which conveys the sense of something being carried, making it better than device because it suggests the presence of a rider being conveyed somewhere.
Change happens. Words change. In Shakespeare, where "device" is always a plan, intention or scheme, Hamlet decries that "Our wills and fates do so contrary run/That our devices still are overthrown."
Editor's note — Reader Brian Goldberg added this on Facebook, which seemed a valuable coda:
Your article inspired me to do a tiny bit of research, admittedly superficial. Consistent with your own caveat that "peanut gallery" critiques are not always right, I figured there had to be a somewhat reasonable explanation, and I think I found it. For years Central Park had signs saying "No Vehicles" on various paths, and everyone understood that this ban primarily included bicycles. But then there was a proliferation of other vehicles, mostly scooters (both human power and motorized), and it appears that a decent number of these vehicles were being used even on the "No Vehicle " paths, or at least there was a seeming concern that they would be, based on people claiming "But I thought vehicles just means bikes and cars/motorcycles." So someone came up with a whole new term, "devices," and specifically wheeled devices. It is an admittedly awkward, arguably "wrong" use of the term, but it worked. Because device is such a clearly different term than vehicle, people "get" that "wheeled devices" means something different — in this case, basically anything with wheels. Or more accurately, people can no longer claim that the "No Vehicle " sign does not apply to them (scooters, etc, and maybe a resurgence of rollerblading?) Even though it obviously did, because it is a "No Wheeled Device" sign. So beleaguered park employees do not have to try to over explain the original signs, and can just point to this one.