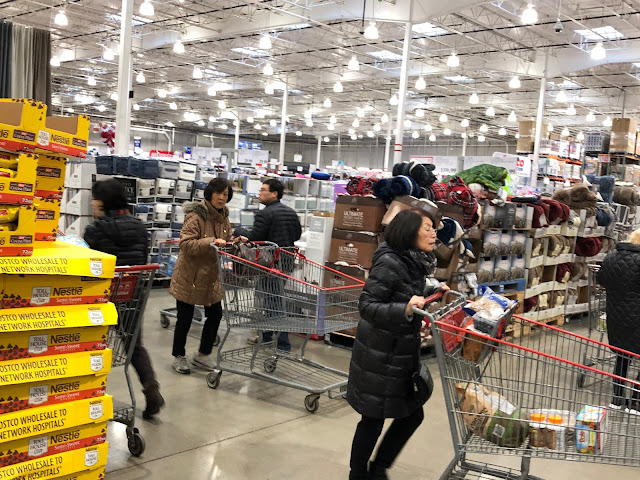 "Everybody's Asian," I thought, shopping last week at Costco.
The notion came out of nowhere, and I looked at it, as if somebody had lain an unfamiliar coin in my open palm.
What to make of it?
There is a certain inherent racism in such a thought: we aren't supposed to notice such differences.
Though we all do. We've trained ourselves not to remark upon such thoughts; it's safer that way. Nobody can complain about something you didn't say.
But I feel comfortable ... well, maybe not comfortable ... I believe that sharing the thought is not blatant folly because it wasn't followed by any kind of negative imperative. It wasn't "Everybody's Asian, so I 'm not coming back here," or "Everybody's Asian, and they're eating up all the coconut shrimp like Asian people do."
I don't harbor negative stereotypes, that I know of; I have Asian friends, relatives. They have the same good qualities and flaws that everyone else has.
Still, there the thought was: "Everybody's Asian."
Instead of pushing the thought away, I tried to pick it apart, understand what it meant.
Maybe because the status of Asian-Americans is in the news due to the Harvard lawsuit—Asian students alleged that they were the victims of quotas,  that standards are lowered for non-Asians so that the university wouldn't have a percentage of Asian students high enough to spark discomfort. The sort of systemic bias that Jews faced in the 1920s and 1930s.
Maybe Harvard looked around and had the same thought I did at Costco. That's reassuring. At least it isn't just me.
Noticing the presence of others who are different than oneself is a sign of mild discomfort. I might expect my suburb to be a certain mix, and if that mixes shifts—the Asian population of the Northwest suburbs is growing faster than other ethnic groups—you notice.
Discomfort being how dominant races feel when they find themselves in the minority.
Not that I felt discomfort. It felt like a neutral observation, maybe salted with muted surprise. In certain settings it wouldn't be remarkable. If I were, oh, at the Super H, an Asian market in Niles, I wouldn't think, "A lot of Asians here." It would be expected. As it would be in Japan, or China, or Taiwan, or the other Asian countries I've visited. So perhaps because I was in the Costco in Northbrook. No different than finding regular-sized packages for sale.
Nor that I consider myself the member of a dominant race. As a Jew, we're by definition in an extreme, despised minority, though our minority card seems to be revoked. We're the minority that other minorities feel  free to hate, or lump together with white Christians, as circumstances dictate. The worst of both worlds; all the drawbacks of being a minority but none of the benefits.
That isn't true either. Benefits aplenty. See, this is why people don't write about these issues. So easy to slide into the ditch.
At checkout, I looked around, tried to put a number on that thought. Was "everybody" really Asian? No, not even a quarter. Enough that it would register on my radar. So the thought was something bogus, unvalid. A glitch in the system.
Which is what makes this exercise worthwhile. We can't recognize our errors if we never examine them. The whole subject is generally avoided. We yield the issue to the people most concerned, supposedly. But that too is a kind of racism. It is of concern to us all. Silence is too easy.