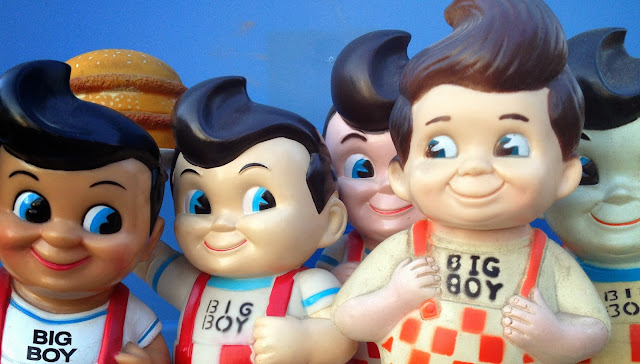 Grant me this, I am consistent. I was in Nexis, trying to find out what happened to the Campbell's Soup Kids—there's no evidence of them on the Campbell's web site—and I stumbled upon my own story, from 16 years ago, mentioning the chubby siblings.

My first thought, reading this below was, "They printed that?" Because it seems so exceedingly trivial, even for me. And those four dashes in the opening sentence; I would never do that today, and it's all I can do not to repair it. But if I start trying to clean up old columns, well, that's all I'd ever do.

If you were to walk into my house—please don't!—but say you did—no, I'm serious, I'll call the police—theoretically walk in, that is, and went to the TV room, which is what we call our repository of toys and junk, there you would find, in addition to two young boys who have been watching Spider-Man cartoons so long their eyeballs are swelling shut, there above the shrinelike TV, another shrine of sorts. A series of five standing figurines, each 10 inches tall, each pot-bellied like a Buddha, each in red- and white-checked coveralls. Two holding hamburgers aloft.
I refer of course to Big Boy.
Now I know that the Big Boy restaurant mascot is an object of post-modern irony to many people, who keep a Big Boy or two around as some kind of knowing wink at consumer culture.
That is not why I have five Big Boys at home. I own them sincerely, because I love Big Boy. I always have. I know this will seem very strange to those who consider Big Boy a mere corporate shill, like Colonel Sanders or Michael Jordan or Mayor McCheese. That's why I'm writing this—not just to reveal yet another embarrassing personal detail. But to try to understand what it is about the homunculus that is so appealing.
What is it about the Boy?
This comes in the wake of our story Thursday, about the town fathers of Canton, Mich., attacking a 7-foot Big Boy statue in front of a local restaurant, citing zoning against multiple signs.
The owner, Tony Matar, defended his Boy—it isn't a sign, he said. "It's an icon."
He sure is. More than an icon. Big Boy is a god (not the God, capital "G"—put down your pens, please—but a god, sort of a fast-food deity. The Spirit of American Burger Plenty).
Big Boy is often depicted as running, frozen in mid-stride, lofting his enormous namesake burger high above his head. He is our Hermes, our Mercury, the god of travel and double cheeseburgers.
There are so many reasons to love Big Boy I don't know where to begin. First, he's so happy—beaming like he's ready to explode with joy, eyes goggling, apple cheeks about to pop. Second, that Reaganesque pompadour. So strange and wonderful. And third, he's fat. How many food brand mascots are fat? Campbell's Soup sent their chunky twins to Jenny Craig years ago, Aunt Jemima lost 40 pounds along with her scarf.
Fourth, the Boy carries a whiff of 1950s California drive-in culture, with its boomerang architecture and leering mascots, like the Pep Boys, Manny, Moe and Jack. Or Big Boy who, now that I think of it, does have a certain malign look about him, like he should have eight arms: Big Rav Boy, the Destroyer. And that appeals, too.
The power of Big Boy is such that I am drawn to his chain, despite the fact that I've had some of the worst dining experiences in my life at Big Boy restaurants.
I should stress that I haven't been to every Big Boy in the country—they are different companies regionally, Bob's Big Boy and Elias' Big Boy and Frisch's Big Boy—and I imagine there must be some that aren't lousy. But I've had not one, but several legendary disasters. Once the food never came at all, and we had to eventually get up and leave, the boys weeping with hunger. Another, with a family we vacation with in Ohio, was such a terrible experience that to this day—years later—all we have to do is raise the question of where to eat lunch, and lips begin to curl into mocking smiles, and eyes dart in my direction as I slump and hide my face with my hands, scoured by the memory that it was I, Big Boy's acolyte, who insisted we go there.
Strangely, these nightmare visits have not soured me on the Boy himself. Even at that Ohio Big Boy, waiting endlessly for our cold food, I had only good feelings for him.
"If only Big Boy knew," I said, echoing the kind of faith that abused Russians had in their czar 100 years ago, conjuring the image of Big Boy arriving just in time to save our lunch, rushing into the kitchen, a blur of activity, shouting orders, firing people.
All hail the true burger king!
To understand the power of the Boy, look at all those other mid-level restaurant chains— Denny's and Hardee's and such. Sure, their food might be better. But what are they in the hearts of America without a Big Boy? Nothing.
Ronald McDonald is frightening in that way that only clowns can be. I never see him without expecting him to be holding a bloody ax. Wendy's mascots were worse—first that freckled, pigtailed Wendy creature, who looked like the vile Pippi Longstocking, and then Dave, the CEO, who tried to be lovable but you just knew, when the cameras weren't rolling, was screaming at cringing underlings, white spittle flying off his lips.
That's it. That's the answer. Big Boy is comfort. He is cheeseburgers and malted milk and smiles and rest and safety. But, like so many minor deities, he is only the promise of these things, the promise of paradise. The graven image of delight without the substance.
—Originally published in the Sun-Times, April 16, 2004