No shortage of Iranian cultural sites for Trump to blow up


When President Trump said Saturday that the United States had targeted 52 important Iranian cultural sites—52 being the number of American diplomats taken hostage when the American embassy was seized in 1979—the sheer callous brutality of the threat cut through the recuperatory fog and caught my attention.
If Iran reacts to our assassinating Maj. Gen. Qasem Soleimani Friday, they can expect national treasures at “a very high level & important to Iran & the Iranian culture” will be destroyed, Trump tweeted. “Those targets, and Iran itself, WILL BE HIT VERY FAST AND VERY HARD. The USA wants no more threats!”
Threats like the one Trump was at that moment delivering, hypocrisy being one of our president's superpowers. Another being a constant ability to amaze. Really, you think you must be in the basement now, and an entire necropolis of baseness and loathsomeness opens up beneath your feet.
It isn't that the United States is incapable of taking vengeance on cultural gems. The medieval Saxon city of Dresden, which survived most of World War II generally intact, was fire-bombed by the Allies in February, 1945, three months before the end of the European war, with a loss of 100,000 lives, not for any particular military purpose—though there were factories and rail hubs—but, it was believed, as a blow to German morale and as general payback for starting the war.
But such acts are considered war crimes now, exactly because they were done in the past. Trump of course is utterly ignorant of such things, and stuck by his threats, using Iranian brutality as America's new moral compass.
“They’re allowed to kill our people," Trump told reporters Sunday. "They’re allowed to torture and maim our people. They’re allowed to use roadside bombs and blow up our people. And we’re not allowed to touch their cultural sites? It doesn’t work that way.”
The whine is a perfect example of what I call "terrorism envy:" "Awww, c'mon! They get to cut people's heads off! Why can't I? It's not fairrrrrrrr!"
Perhaps because the assumption that such threats are Trump's typical empty bluster and lies, I didn't notice anybody in the media pause to wonder precisely which cultural sites are in the crosshairs should Trump break precedent and actually follow through on something he insists he will do.  And what's the actual process for this? Did he assign some colonel to come up with 52 candidates?  And did that cringing underling then start pawing through old Rick Steves guides to Iran, looking for cultural destinations to demolish?

If so, it wasn't a very difficult assignment. There are quite a lot to choose from.
The ruins of the 2500-year-old city of Persepolis come immediately to mind. The ceremonial capital of the Achaemenid Empire is one of 24 UNESCO World Heritage sites in Iran, and a reminder that it has hosted civilization back nearly 10,000 years, to the Assyrian and Mesopotamian empires. It wouldn't take too many cruise missiles to level those old stones.
Iran has dozens of museums, including museums focusing on electricity, music, and carpet. It also has a peace museum, whose eradication would be one of those gaslighty touches that Trump sometimes revels in.

My guess is that Trump isn't thinking—to stretch the term—about blowing up ruins, or museums, but in his ganglional clump of a mind, "cultural" is a code word for "religious." There are hundreds of significant mosques in Iran, some of surpassing beauty, such as the Nasir al-Mulk Mosque in Shiraz, shown at the top of today's post. I picked it for its sheer loveliness, rather than any deep history. It was built in 1876, at the height of that country's embrace of the West, and it would be ironic if it got one of Trump's missiles, which is another form of Western influence, I suppose.
There are also many shrines, like the 1100-year-old shrine of Imam Reza in Mashhad, conveniently close to the border with Afghanistan. 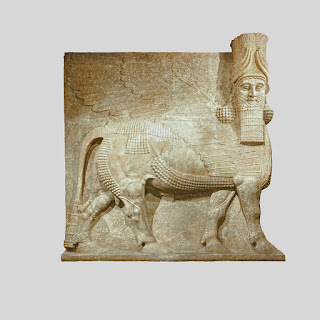 A man of Trump's intellect should not be underestimated. There is no reason why destruction of Iranian cultural sites need be limited to Iran, whose legacy has spread across the globe.
The University of Chicago's Oriental Institute, for example, has a gorgeous human-headed winged bull from the court of Sargon II.  No need for a difficult air attack launching expensive ordinance: Trump could dispatch a few federalized Illinois National Guardsmen with sledge hammers to break the thing up, or use dynamite, like the Taliban blowing up the Bamyan buddhas. The destruction could also be a blow against another perennial enemy, the City of Chicago. Extreme? Sure. But if terrorists get to do it, why not us?