The squirrels win a round 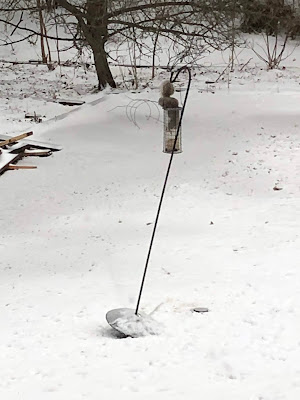 Human beings have a genius for ignoring warning signs.  In matters big and matters small.
An example of the former is found if you've been following the for-the-textbooks corporate meltdown at Boeing over the 737 Max, with mocking emails painting a corporate culture 180 degrees opposite to everything they purported to be. Negligence that will end up costing a thousand dollars in real losses for every buck saved through corner cutting and betrayal of their standards. You wonder why there wasn't one adult in the room, screaming bloody murder over this act of corporate sepukku. Who quit in protest? Nobody, apparently.
Why? Because they're humans, and humans tend to shrug and overlook. Look at climate change. The whole world being destroyed before our eyes. Ho-hum, from some quarters.
Nor does the issue have to be huge to spark willful blindness. We run the gamut, from leaking levees to fraying shoelaces. We see the trouble brewing. We think: "I should do something." Then do nothing. Even on tiny matters.
As an example of small negligence, consider the bird feeder in my backyard. On Wednesday, I looked outside and noticed that my foolproof anti-squirrel system—a clear shower rod supporting a circular baffle—had collapsed, the thin plastic of the rod finally being degraded by the elements. It had done so a couple times before, and I had always managed to rig it back up. The thing to do would be to buy a new rod, but that would take a trip to the hardware store and $5 or $10.
"I'll have to fix that before a squirrel gets in," I thought Wednesday, doing nothing. 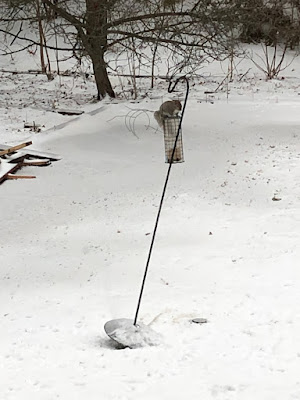 Then Thursday, this. A loathsome squirrel, face down my bird food. My birds' food. He must have shimmied up the pole (the shower rod keeps squirrels from grabbing the pole with their powerful, robber's hands) and pried off the cover. These squirrels are so devious, I wouldn't be surprised to find one picking a Yale lock.
I should, I thought, stride outside and immediately fix it. But that would involve putting on boots. Which would require first putting a sock on my right foot. Which is still a task that requires concentration and not a little pain. I made a mental note to take care of that ASAP.
Friday, the squirrel was back, bird feeder diving again. And I resolved, the very next time I'm outdoors, to be driven—I can't yet drive—to the hardware store and grab a new pole, get things back in shipshape order, so that the feeder can serve the valued members of the Steinberg yard community, aka birds, and not provide further energy to the loathed and already plenty hyperkinetic interlopers whose presence might be tolerated, but should never be encouraged, even through inaction.