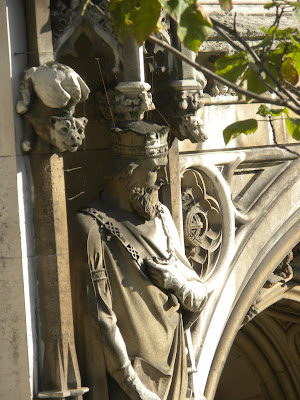 "Even the most pleasurable of imaginable occupations," the great James Thurber once wrote, "that of batting baseballs through the windows of the R.C.A. Building, would pall a little as the days ran on."

A truth worth bearing in mind whenever someone steps down from what seems, at a distance, an enviable job, whether a professional athlete retiring early, a movie star giving up career for home life or, as happened midweek, Meghan Markle and Prince Harry announcing they will "step back" from their duties as key members of the British Royal Family, and begin spending part of the year in North America, probably Canada.
In case, like me, you don't follow the royals assiduously, Harry is Prince William's younger brother, the two making up the sons of Prince Charles and Princess Diana. Queen Elizabeth II is Harry's grandmother.
The 18 months since Harry's much ballyhooed marriage to NU grad Markle, apparently, have not been pleasant ones, the happy couple squirming under the microscopic gaze of the racist British tabloid media which, remember, is blamed for hounding Harry's mother to her death in Paris.
It makes sense. There is something of the superfluous to their position already: Harry probably will never end up with his face on currency; he's just hanging around, in case he is ever needed.
I can't gauge the reaction in England. But here the immediate social media reaction seemed to be general sympathy that each of us has only the one life, and spending it cutting ribbons and sitting on daises might become unbearable, no matter how fancy the car you drove up in.
There must be some pushback, from disappointed Brits who expect the royal family to be a perpetual circus conducted for their amusement, and it will not do for the acrobatic dogs and performing ponies to complain, never mind shirk their duties.
And I suppose there will be smirking that this is perhaps the ultimate example of Gen Y—Prince Harry was born in 1984—recoiling from the world of work, no matter how plush. Though the couple insist they are going to use their time to become "financially independent." The plan seems to be they will be working in some fashion, except for themselves rather than for the House of Windsor.
A promising sign, perhaps. The entire democratic push against royalty over the past 300 years was predicated on the notion that we are not trapped by the conditions of our birth, but can build independent lives of our own choosing and, should we please, even change those lives at any point.  The implication was always that the pre0rdained roles being escaped were humble ones, but I suppose it should work similarly for the high born. The bottom line is, we can forge our own selves.
Some of us can, or hope we can. It's difficult. We all have complicated relationships with work. Work is something we have to do, most of us, for the money. But it's also something we love, often, if we're lucky. For a lot of people, it's clock punching and grinding routine. Hard for me to imagine; since I'm blessed with a job I really love, while being at an age where the snug harbor is, if not looming before me, at least is a spot on the horizon. While I'm in no rush to get there, I do not dread it either. These past 10 days, recovering from surgery, have been useful in that regard. To my surprise, I haven't felt that desperate, if-you're-not-in-the-paper-you-might-as-well-be-dead feeling I typically get when stepping back from the column. Maybe because I'm too worked over, too tired, too focused on healing, on walking properly, and don't have have the energy or focus to write a decent column, this present bit of piffle notwithstanding.
So when should I make the deep bow and exit? I figure I'll know the time when it comes; maybe a decade away, I hope. When I find myself facing fatigue that  a few weeks at home won't fix. Then a graceful exit will be something of a duty.
As always, the Great Cham of Literature, Samuel Johnson, put it best.
"He that is himself weary will soon weary the public," he wrote , when he brought his twice-weekly series of essays, The Rambler, to a close after two exhausting years.  "Let him therefore lay down his employment, whatever it be, who can no longer exert his former activity or attention. Let him not endeavor to struggle with censure, or obstinately infest the stage till a general hiss commands him to depart."
That sounds like a plan, fit for commoners and royals alike.