The mayor puts her foot down 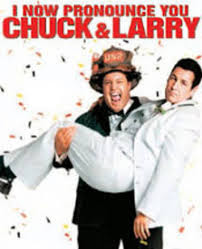 Watched the presidential debate Tuesday night. Not much to add to the general roar. The whole thing seems beside-the-point right now. One of these candidates will have to defeat Donald Trump. Or lose to him.

Or Michael Bloomberg will swoop in and do the job. Though that seems improbable, no matter how many commercials he runs.  Besides, is another self-absorbed billionaire really the answer to whatever our country's real problem is?
The next day, discussing the outcome with my younger son, he mentioned that South Bend Mayor Pete Buttigieg is at a disadvantage compared to Joe Biden, since black Americans won't support him, because he's gay, and African-Americans have a particular animus toward gays.

According to common wisdom. The idea is that, being devout church going folk, they hold the prejudices of the Christian faith a little tighter than most.
The common wisdom. But is it actually true? I went looking for numbers. A Pew Research Center poll last year found that while 62 percent of white American adults support same-sex marriage, only 51 percent of black American adults do.
A gap, though not a huge gap. Maybe the effect is magnified because it is more surprising to see blacks being homophobic—just as it is surprising to see them being anti-Semitic—because the of the charmed notion that, having been subject to such prolonged and systemic bigotry themselves, blacks might be more reluctant to inflict baseless hatred upon others.
Pretty to think so. I don't see much evidence of that being true for any minority group. Racism is a kind of false power, and sometimes disadvantaged groups are even more quick to resort to it, having little else to boost themselves than to jeer at someone they can consider lower. Jews certainly have suffered tremendously at the hands of history, and while Jews, as a group, have certainly worked toward aiding the struggles of other minorities, they also, as individuals, are perfectly capable of expressing the vilest prejudices.
There was an example of black anti-gay bias on display this week in the Chicago City Council. Mayor Lightfoot sponsored a resolution to look into whether LGBTQ businesses are discriminated against when doing business with the city. During committee debate Tuesday, several black aldermen took turns looking askance at it. Ald. Walter Burnett Jr., questioned whether white gay men can be considered victims of prejudice at all. "I don't think they're discriminated against," he said, incredibly invoking “I Now Pronounce You Chuck & Larry,” an Adam Sandler yuck-fest where two straight firemen pretend to be gay to gain benefits. He wondered: how can you even tell whether a person is gay or not? What if people are making it up?
On Wednesday, at the general meeting, Mayor Lori Lightfoot stood up and was having none of it.
"I don't normally speak during City Council debates," Lightfoot began, in an angry rebuttal. “As a leader, as a black gay woman proud on all fronts, I have to say I’m disturbed by the nature of the committee discussion and the nature of the discussion here today...I will be silent no more on any issue when people say and do things that are offensive and racist, I feel I have an obligation to speak and so I am.""
I won't go into her whole remarks. They're brief; you can watch them here. But I have to say, I continue to be impressed with Lightfoot. Yes, she is only standing up for her own, and that is not exactly a profile in courage. It is the least anyone can do. Still, she is without a doubt standing up. Often, when a person from a minority group comes to power, they promptly ignore that group, figuring their support is secure. Barack Obama was an example of that—not exactly going out on a limb to help black Americans. But Lightfoot doesn't seem as if she's going to fall into that rut. Good for her.
Posted by Neil Steinberg at 12:00 AM