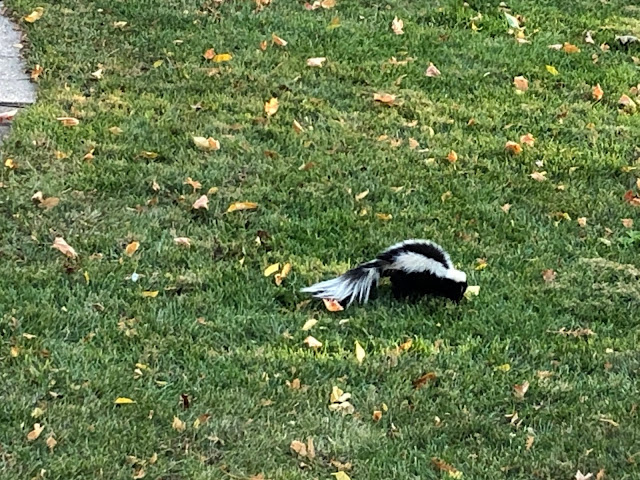 Okay, I'm finally a true suburbanite.
I thought I was, before. But I really wasn't. Now I am.
How come? What changed? I've lived in the leafy suburban paradise of Northbrook for more than 20 years. What did I do now that I haven't done before?
I called the cops on a skunk.
In my defense, I didn't want to. My wife alerted me to the skunk, kind of poking its nose into the grass in our front yard. Which was strange, because it was in the middle of the afternoon. Usually skunks come out at night.
"I think it might be hurt," she said. "It's kind a limping." I watched. It was hard to tell what it was doing. A fan of inaction, I counseled waiting and hoping it went away.
It didn't. An hour later, the skunk was still there, in a different spot on the front lawn, probing its nose, this way and that. And a definite, not entirely unpleasant eau d'skunk was permeating the house.
My wife and I watched it.
"Hey skunk!" she yelled, loudly, "Go away!"
So I guess she's a suburbanite too. Yelling at woodland creatures. The skunk didn't flinch, but kept its obsessive lawn poking.
"Call 311," my wife suggested. That only works in the city, or at least didn't work when I tried it. I plugged "Northbrook Animal Control," into my iPhone. Animal control's web site suggested I call the police non-emergency number.
So I did.
In my defense, I was not panicky or demanding. I didn't expect squad cars to show up and arrest the skunk. I was curious what, if anything, I should do. Maybe the thing was in distress.
"They're feeding on grubs in your lawn this time of year," explained the friendly police woman, who sounded as if she had been fielding skunk calls all day. She said, if I want, she would call an animal service for me.
"Will I be charged?" I asked. I didn't want to pay $600 to remove a skunk that was lingering on our lawn. To be honest, skunks in the daylight made sense. It fit in with the general strangeness of these very strange times, the mask-wearing, plague-ridden, darkness-at-noon, black-sun-in-the-sky-at-night weirdness and inversion of all established verities that has been going on since the pandemic kicked in a few months back. If you turned on the bathroom faucet and a gusher of black blood poured out, well, why not? Most of 2020 has been like that.
No, the police officer said, you won't have to pay. The village covers skunk removal, should it come to that. That seemed generous. And still extreme. Getting carried away. It was only a small skunk.
"Let's wait," I said.
A while later, it was time to walk Kitty. The skunk was still there, exploring a corner of the lawn, rather frantically I thought. Very focused on the ground in front of it. I put the dog on a short leash and we quickstepped down the walk and vectored away. The skunk didn't seem to notice us. Kitty didn't notice the skunk. It was still there when we got back. We gave it wide berth.
And that's it. By our nighttime walk, the skunk was gone. Though there was a skunk—a different one, not ours, bigger—in the Village Green, which is not unusual. I've been there very late at night when there are four or five skunks, skunks in all directions, large and lurking, almost scary in the darkness. Keeping an eye on this little skunk, we hurried by it. Then, on our way home, we altered our route so as to avoid it, my keeping an eye on the thing, to make sure it didn't rush us. Waiting and avoiding are, I believe, undervalued strategies for coping with certain aspects of life. Some problems, like skunks, are better avoided than faced head on. They have a way of solving themselves, if you let them. There was no sign of the skunk on Monday.