German engineering? Great. German typography? Not so much. 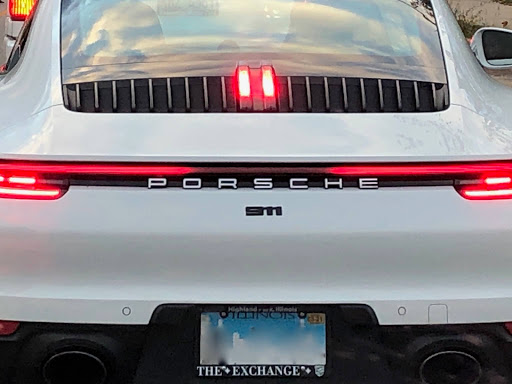 This doesn't happen often. You notice something done well then, taking a closer look, see that it is also done poorly.
Look at the back of this Porsche I pulled up behind at red light the other day. My eye went, as it has before, to the word "PORSCHE" and I admired the font, the spacing, the neat elegance of the stylish typography. Very cool. You pay ... $97,000 for a sports car, the name of the maker should be nice. And it is.
Now look underneath. At the figure under "PORSCHE." Kinda hard to read, right? I mean, not impossible. Not indecipherable. You squint, and you can eventually, as I did, see that it is "911," which makes sense, because that is an iconic, perhaps the iconic Porsche model number, used for decades. But the "9" is so compressed it looks like a rectangle. And the "11" almost looks like a lower case "n." You'd think at some point some German engineer, or designer, would look at the back of the car and say, "You know ..."
But they didn't.
Not the biggest deal in the world. We covered that yesterday. And will cover it again tomorrow. For today, I suppose there is almost a comfort, in knowing that even a huge German luxury carmaker like Porsche can fuck up the name of their own car in such a small yet noticeable way. Though it does make you wonder: if they get that wrong, what else did they get wrong? Oh well, join the club. If 2020 is remembered for anything, it will be the Year of Screw-ups, big and small.
Posted by Neil Steinberg at 12:00 AM