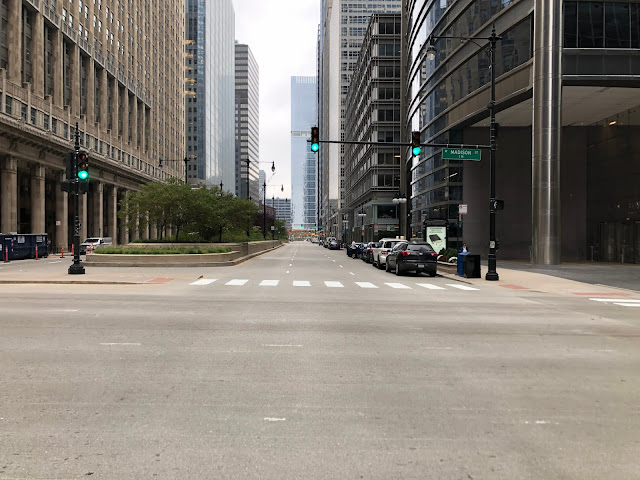 By Tuesday, Oct. 10, 1871, the fire that incinerated the center of Chicago had finally died out, helped by rain. The smoke cleared, and residents were struck by the lack of commotion, comparable only to when Abraham Lincoln's body paused in the city on its way to burial in Springfield.
"Chicago's downtown, normally one of the most hectic places on the planet, was more still and silent than it would ever be again," Carl Smith writes in his excellent new book, "Chicago's Great Fire," then quoting a pair of contemporary reporters: "There was no running of the street-railroad cars, or other of the signs of life which are usually visible, even on Sabbaths and holidays. In short, the day seemed a dies non—a day burnt out of the history of the city."
Maybe 2020 isn't quite shaping up to be an année non, a year lost by the COVID-19 pandemic.
But close.
Walking from Union Station to Harold Washington Library on Monday, I saw flashes of activity. A pedestrian or two in the distance, here and there. An occasional bus. Cars in ones and twos. But it was easily to saunter leisurely across Monroe Street, and the overwhelming effect was of eerie abandonment.  A stage set ready for a city to happen.
On several levels, COVID-19 is a far worse disaster than the Great Chicago Fire. And only several hundred Chicagoans died in the fire; some 3,000 Chicago residents have died in the pandemic (and, it has to be pointed out, a wildly disproportionate number of Black Chicagoans, who make up 30 percent of the population but account for 60 percent of the deaths). The pandemic is certainly taking longer to unfold. While far more dramatic, the worst of the Great Chicago Fire was over in 36 hours.
Now, seven months in, we can't even be certain we've hit the Bad Part yet.
To get in the library, you pause in front of a thermal scanner, and have your temperature taken. Then it's pretty much as usual: people at desks, consulting books. Helpful librarians on duty, everyone masked, more or less, even most pedestrians in the street. Though emptier than usual.
History serves many purposes; it warns, but can also reassure. We've endured bad things before. Whenever anyone suggests that the country has now split in some unrepairable fashion, I want to snarl, "We seemed to recover after the Civil War."
Or did we? Maybe we haven't. Maybe this is just another skirmish in the endless struggled between would-slaveholders and their unwilling slaves. They even use the same flag.
The cost of COVID-19, in business and businesses lost, might end up far exceeding the Great Fire: I'd hate to be the guy who had to figure that one out. Smith mentions that 25 percent of the loss to the city was its grand courthouse, and $100,000 worth of water drained away from melted lead pipes. How many businesses in Chicago will never open again, between the plague and the riots? Crossing the Loop, I couldn't help but notice boarded up or cracked windows, empty storefronts.
But the city stands, which is something. The trains run—this was my first trip aboard a Metra in seven months. The car going into the city had nobody at all on it; coming back, two. The only person not wearing a mask was a conductor—well, he had one on, I'm sure he'd argue, but having it under your nose defeats the purpose. But I felt safe; well, as safe as a person can feel nowadays.
The library closes Special Collections for an hour at lunch, and I swung over to LaSalle Street, to the Corner Bakery, and had a salad, outside, shielded from the misting rain by a big black umbrella. Occasionally someone passed by, but general LaSalle Street was empty at 12:30 on a Monday.
Back at the library, in mid-afternoon, after I had about all the historical information I could cram in my mental pockets, I gathered my materials and headed to Union Station, treating myself to a Rocky Patel Vintage 1990 for the walk across the Loop.
There was enough stogie left for me to stand for maybe 10 minutes, just southwest of the Madison Street bridge, gazing at the water. I used to like to do that at the end of a long workday day, you know, when we used to spend days downtown. Lila, a big Wendella tour boat cruised past, going north, and I couldn't help but notice the tour guide on the upper deck sat perched on a stool, holding a microphone to his lips, and was saying something to an expanse of completely empty white chairs. If it weren't raining, I might have snapped a photo, but with a cigar in one hand, and an umbrella in the other, it would have taken a bit of fumbling, and umbrella, cigar and phone might have all ended up in the river. So you'll have to take my word for it. But I admired that spunky Wendella guide—maybe practicing?—giving a tour to nobody.
That has to be a little grim, but also reveals a kind of fidelity. That's being a professional. We soldier onward, circumstances be damned. That's certainly what I'm doing, here, not talking to empty chairs, of course, but not entertaining a multitude either. Still, work does pass these grim, uncertain days of unnatural stillness and waiting, as the leaves burst into color and drop, and the nation hurtles toward its perilous rendezvous. That's the beauty of routine; it's something to do when you don't know what to do.